A HIT-AND-RUN driver who was on his phone when he killed a cyclist has been jailed for eight years.

Reuben Richardson (pictured above), 38, drove the wrong way up a one-way street when he collided with Antonio Marchesini and then fled the scene, a court heard.

Mr Marchesini (below), 51, was in a high-vis vest and patrolling a cycle lane when he was struck in Deptford, south-east London. 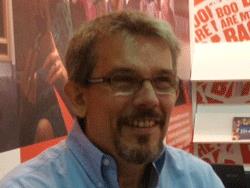 Richardson, who was on licence from prison, accelerated to free the trapped bike, before dumping the car and running away.

Prosecutor Deanna Heer told Woolwich crown court witnesses saw a Mercedes being driven ‘erratically’ on June 3 last year. ‘One, who was with her children, heard a loud cracking noise. When she looked she saw the deceased was on the ground and shouted at her kids not to look,’ she said. Mr Marchesini’s father Luciano, 80, said the Italian IT worker spoke five languages and volunteered in orphanages. When told the news, he said: ‘I felt like I was going to die.’

Richardson, who had no driving licence or insurance, gave a false name to officers and refused to talk in his police interview.

He admitted causing death by dangerous driving in August.

As the sentence was passed, Richardson stormed out to return to the court cells.

Judge Nicholas Heathcote Williams QC told him: ‘You are a selfish man. The sympathy you claim you feel is shallow.’