SELENA GOMEZ has proudly displayed the scar from her kidney transplant and said ‘all bodies are beautiful’.

The pop singer, 28, underwent an operation in 2017 after suffering complications from the autoimmune disease lupus.

Gomez said she was initially apprehensive to display the resulting scar on her inner right thigh and admitted she had tried to hide it.

However, she said she has now embraced her body and posted a picture to Instagram, proudly posing in a blue one-piece swimsuit which also displayed the praying hands tattoo on her left thigh. 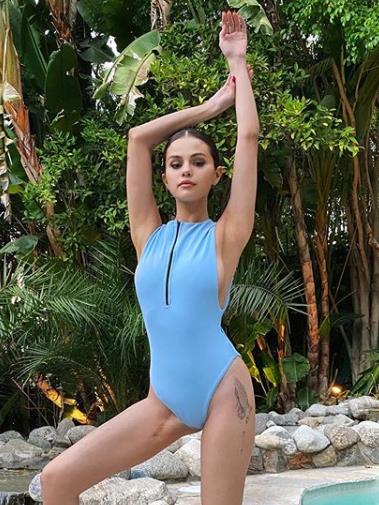 In the caption, Ice Cream singer Gomez wrote: ‘When I got my kidney transplant, I remember it being very difficult at first showing my scar. I didn’t want it to be in photos, so I wore things that would cover it up.

‘Now, more than ever, I feel confident in who I am and what I went through…and I’m proud of that.’

Gomez was sharing a message about her friend Theresa Mingus’s fashion line, adding: ‘All bodies are beautiful.’

Former Disney Channel star Gomez has been open about her health struggles. She received a kidney from her friend Francia Raisa, who later revealed Gomez nearly died due to complications from the surgery.

In April, Gomez appeared on Miley Cyrus’ Bright Minded Instagram series and revealed she had been diagnosed with bipolar disorder.

After undergoing treatment for anxiety and depression, Gomez said her bipolar diagnosis ‘doesn’t scare me.’