MILLIONS of pupils will be staying home indefinitely from tomorrow after Boris Johnson ordered state schools to shut in a bid to tackle coronavirus.

The prime minister said only the children of key workers and the most vulnerable youngsters will be allowed to attend. They may have to go to a school other than their own and will be looked after by a skeleton staff.

This summer’s GCSE and A-level exams are postponed but Mr Johnson promised to ensure children’s progress is ‘not impeded’ and that ‘in time’ they will obtain the qualifications.

Pupils from low-income families who are entitled to free school meals will be given food vouchers to help their mums and dads make ends meet. The PM said the drastic action is needed because the pandemic is spreading ‘faster than predicted’ in the UK, with the death toll up 33 in a day to 104.

The Scottish first minister Nicola Sturgeon predicted schools north of the border could be out until the autumn and Mr Johnson could not say when lessons will resume.

‘I wish I could give you an answer,’ he told reporters. ‘But we’ve got to do it right now.’ The closures will apply ‘furthur downward pressure’ on the ‘upward curve’ of the virus, he added.

Independent schools, including boarding schools, will be expected to follow suit, the PM said.

The vouchers for children on free school meals will be redeemable in shops including supermarkets.

A full list is due to be published today. Store chains yesterday imposed tighter rationing as panic-buying continued and the total of infections worldwide passed 200,000.

The PM refused to rule out enforcing extreme measures, including a total lockdown in London, as he prepares to introduce emergency legislation to keep people off the streets.

‘We do not rule out, because it would be quite wrong to do so, taking further and faster measures in due course,’ he said at yesterday’s press conference.

‘People are making a heroic effort to comply with the advice but we keep everything under review.

‘The steps we have taken are already slowing the spread of the disease but we will not hesitate to take further steps in the days and weeks ahead.’

The PM’s chief scientific officer Sir Patrick Vallance said schools ‘are not dangerous places’ and children are least at risk from the virus.

But he added: ‘The effect of closure is to knock down further the transmission of this disease.

‘We must make sure NHS intensive care capacity is not breached. As this moves fast, more measures will be needed to make sure that happens.’

The National Education Union said it welcomed the schools shutdown as an end to the ‘chaotic pattern of closures that was developing’.

‘Now, more than anything else, the government needs to concentrate on ensuring that children in food poverty are fed properly — not just those on free school meals,’ a spokesman said.

Labour’s Angela Rayner said: ‘Clarity is required about pupils who were due to sit SATs, GCSEs and A-levels and will now not do so.’

A survey for Mumsnet users found that a schools shutdown would result in 55 per cent working from home, 30 per cent taking leave and 18 per cent leaving older children alone or to look after younger children.

Twelve per cent said they would have no choice but to leave children in the care of their grandparents.

Justine Roberts, founder of Mumsnet and Gransnet, said: ‘Parents knew that school closures were coming, and most are prepared to muddle through any difficulties given the extraordinary context. It’s important, though, that proper provision is made for students who were approaching GCSEs, A-levels or BTECs this summer.’

One of the site’s users expressed relief at the shutdown because children had been playing games of ‘corona-coughing’ and spitting at each other in the playground.

■ A SMALL number of Downing Street staff are self-isolating after suffering symptoms of Covid-19. But none is thought to have been in close proximity with the prime minister, the BBC has reported. Prof Neil Ferguson, who also has symptoms, said central London is a ‘hotbed’ for the virus. Health minister Nadine Dorries last week tested positive and culture secretary Oliver Dowden is also self-isolating. 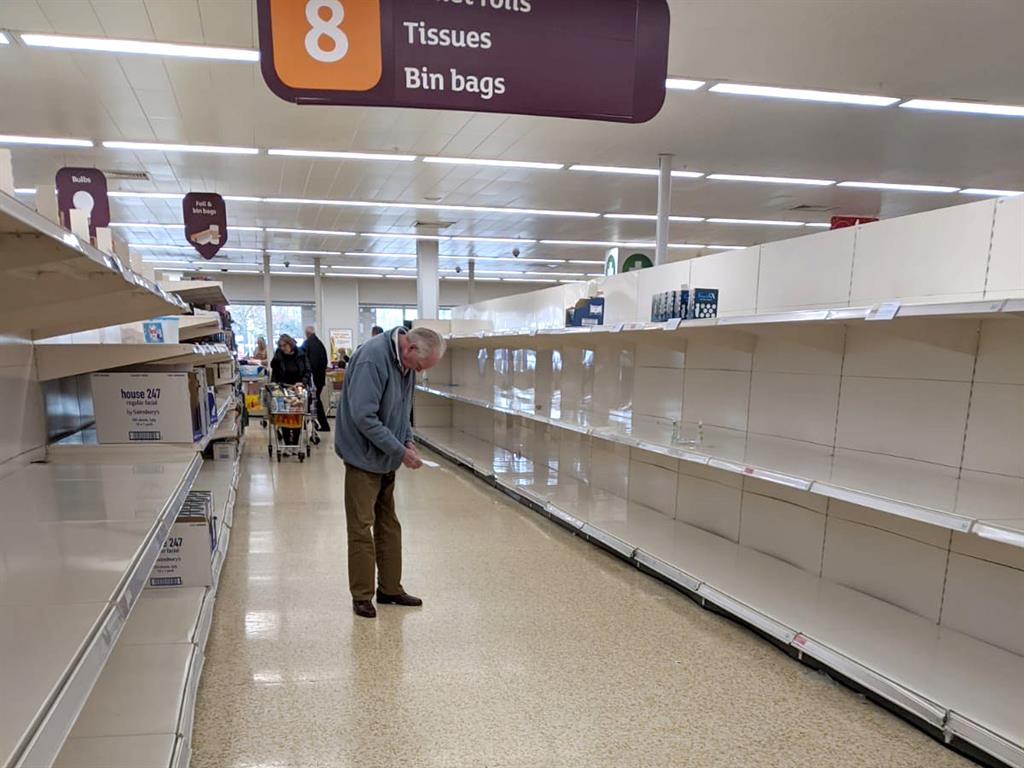 ■ IT’S a picture that should mortify greedy, selfish hoarders… an elderly man left with nothing in a supermarket where shelves have been stripped bare. The heart-wrenching shot was taken by Lauren Taylor, 34, at a Sainsbury’s in Epsom, Surrey. ‘It was really sad. I want people to think about their own grandparents. It must be scary for them,’ she said. The photo went viral as Sainsbury’s and other supermarkets introduced rationing.