SAMANTHA MORTON has said she did not own a TV for seven years and only bought one when she was cast in The Walking Dead.

The actress, 41, said she went without a set because she did not want her children glued to the screen.

When she landed the part of Alpha in The Walking Dead, though, she decided to get one so that she could watch it.

Asked if it was true that she did not own a TV for seven years, the mother-of-three told Radio Times magazine: ‘Yeah, because I lived where I lived [a farm in the Peak District], and I didn’t want one.

‘It’s also because I had young children. You don’t want them to turn the telly on and just be constantly bombarded with stuff. I’m not a huge fan of that when you’re raising children.’

She went on: ‘When I got the part in The Walking Dead, I said to my partner, “Listen, I think we need to sort out a telly so I can watch it”.

‘So we got a television like a normal family.

‘But it has a big blanket over it. At a certain time, the television goes to sleep: “Oh, the TV’s tired!”’ 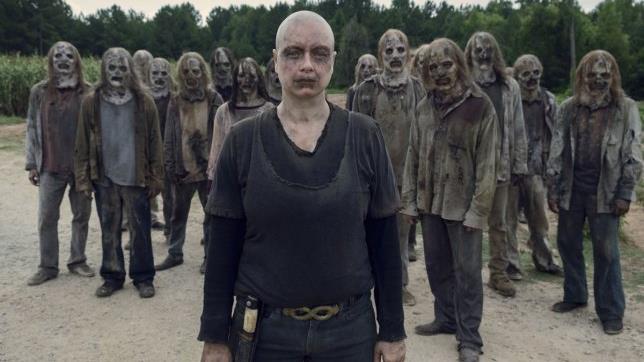 The actress said she was thrilled to land the role of Alpha (pictured), the leader of the post-apocalyptic horror show’s new villains.

‘It was definitely something I’d never really acted before,’ she said.

‘So, when the possibility of me talking to the producers on the show came up, I was over the moon.

‘Then, when I arrived on set in Georgia, everybody was unbelievably kind and welcomed me to “the family”.’