A RUNNING club has set its members a fun challenge for exercise during lockdown — to draw pictures with their running routes.

Chelmsford Central Parkrun in Essex has had to cancel its weekly Saturday morning runs due to the coronavirus lockdown.

But organisers have encouraged runners to stay motivated — by plotting out routes that create a fun picture.

And keen parkrunners have thrown themselves into the challenge, mapping routes that make a variety of animal shapes including dogs, tortoises, a whale and a pig. 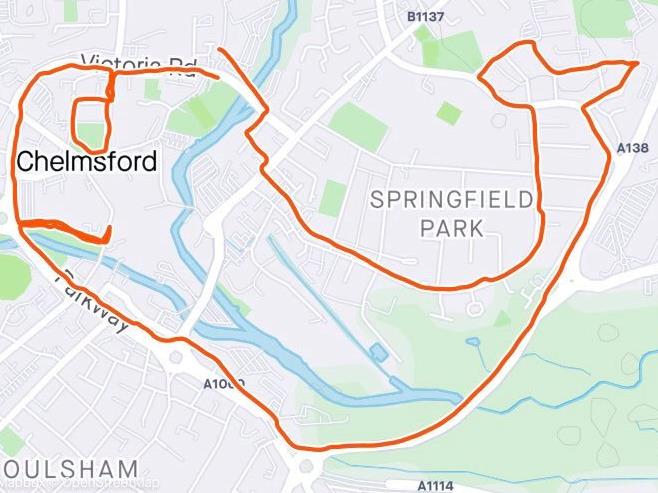 One ambitious couple even set out on a 9.5-mile run just to create an elaborate drawing of a person.

Samantha Chambers, 44, and her husband Alan, 51, have so far contributed five ‘drawings’ to the Strava Art challenge.

The mum-of-four said: ‘With everything going on in the world, it’s just a bit of fun. It’s a good way to mix up our running routes a bit.

‘We like a bit of a challenge — we’ve been spending ages staring at the map on Strava [online exercise tracker], trying to work out what we can create.

‘All our four kids are teenagers so they’re at home in lockdown with us, and we’ll come home and show them what running shape we’ve made that day.’ 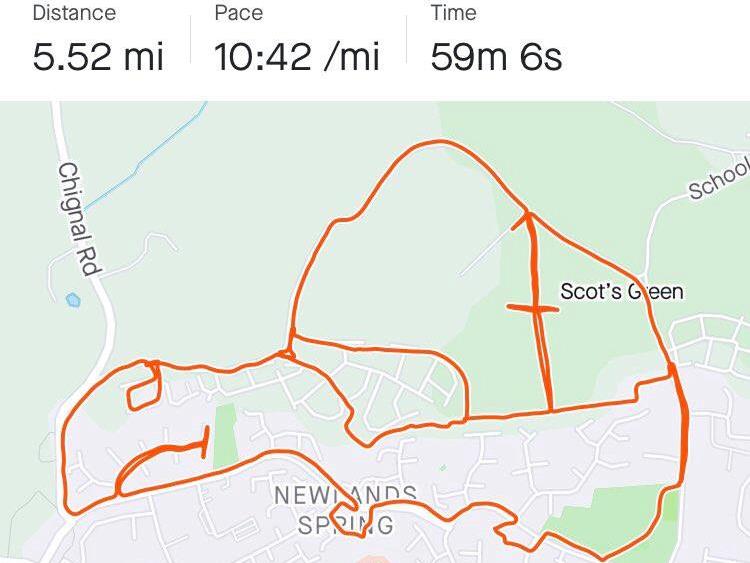 ‘They think it’s a bit embarassing,’ Samantha joked, adding: ‘The most difficult one to do was definitely the man. That was a 9.5-mile run on one of the hottest days of the lockdown.’

Samantha, a Slimming World consultant, and Alan, who works for Royal Bank of Scotland, took up running just over three years ago, after their son started doing the parkrun.

She said: ‘Before the lockdown, we were getting out for a run two or three times a week, plus the parkrun at weekends.

‘I was supposed to be doing the Vitality run in London in the summer, and the Ride London cycling event, but they’ve both been cancelled.

‘It’s nice to be able to keep things creative while we have to run locally and stay close to our house.’

The pair have so far run a dog, a whale, a pig and a tortoise, as well as the shape of a man.

Samantha said: ‘We have a couple more up our sleeves, but one of them is about a 12-mile route, so we’ve got to motivate ourselves to get that one done.’

Fellow Chelmsford Central parkrun member Garry Smith has also been running shapes around the town during lockdown, drawing a dog and a tortoise.

Garry, 52, who has taken part in parkruns all over the world, said: ‘My wife and I are keen members of the parkrun family.

‘We obviously miss the camaraderie of the Saturday morning 5K run, but also the little running challenges of completing different courses and times and so on.

‘So when our local parkrun event director, Gerry McGovern, challenged us to come up with some Strava art, it was something we could not resist.

‘It was my wife, Tania, who got into it first with a bit of a wonky-looking snail and a surprised elephant. After that, I got in on the act too.

‘I thought that, with a bit of tweaking, her surprised elephant would look better as a dog.

‘And then one day, the mapping of an evening walk looked like it could be adapted into a tortoise, so I just had to have a go at that too.’

Garry is chief executive of the Medaille Trust — a national charity which provides safe housing and support for victims of modern slavery and human trafficking.

He added: ‘I have quite a stressful job, so it’s been good to have some light relief in the evenings, combined with some regular exercise, which has been good for my mental health.’