THOUSANDS of homes and businesses have been flooded, river levels are close to record highs and snow could be on the way, forecasters have warned.

Parts of the Severn are approaching their highest on record, it was revealed last night, as many people across Shrewsbury and Ironbridge were left counting the cost of Shropshire’s flood devastation.

Meanwhile, more than 1,000 homes and hundreds of businesses in Wales have been flooded and many living in East Yorkshire were leaving their properties last night.

After heavy snowfall in parts of Scotland and Northern Ireland, experts predict snow could even fall in London and southern England today and tomorrow. Strong gusts of wind were also experienced across much of Britain, as a season of storms raged on. 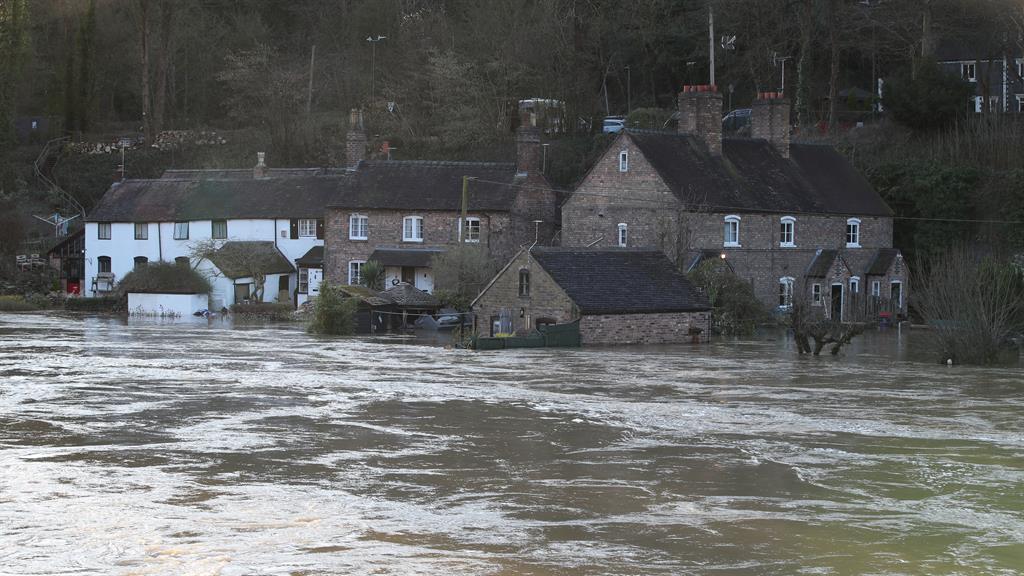 The Met Office announced a yellow weather warning for snow and ice last night covering Northern Ireland and Wales, as well as much of western Scotland and north-west England. A second yellow warning for ice this morning includes south-west England as well as parts of the south-east including London, with wintry showers tipped for higher ground.

The Severn stood at 16.6ft at Welsh Bridge in Shrewsbury yesterday, just below the all-time record of 17.2ft in November 2000 and more than double the level seen just 24 hours earlier. A 100-mile stretch of the river was issued with flood warnings, as more heavy rain was tipped to drench the overflowing waterways — from Newtown in mid Wales to Gloucester in south-west England.

Flooding in central Shrewsbury forced the cancellation of train services between there and the West Midlands yesterday.

More flooding was also predicted on the rivers Wye, Ouse and Trent, with other areas at risk from expected rain on Friday.

Welsh government minister Lesley Griffiths described the damage as ‘absolutely devastating’, with more than 1,000 homes flooded and up to 300 businesses.

‘These were very significant storm events,’ she said. ‘A month’s worth of rain in 24 hours.’ More homes were being evacuated last night after the river Aire burst its banks in Snaith, East Yorkshire.

Meanwhile, the temperature plummeted to minus 4.5C at the Cairnwell in the Highlands, according to the Met Office figures, with similar lows expected today.

Significant snowfalls were also recorded, with 2.8in in Aviemore in the Cairngorms and 1.2in in Northern Ireland’s Lough Fea.

Showers continued for much of the day, with gusts up to 50mph in the South West.

Environment Agency director of incident management Caroline Douglass said: ‘People need to be aware of their flood risk, sign up to flood warnings, make a flood plan and not drive or walk through floodwater.’