OUR royal memorabilia collection has got slightly out of control,’ says Peter Boorman. ‘It started with just a few pieces handed down from my great aunties and granny, whose homes inspired me as a kid. Family and friends often buy pieces when they see them. And our guests who have stayed here from Airbnb also send us items through the post.

‘We have wall plates, mugs and trinkets dotted all over the house. It seems to go down well with the international mix of guests we have. Who doesn’t love the Queen?’

A commemorative plate of Prince Andrew and Sarah Ferguson’s 1986 wedding hangs on the wall near shelves of royal mugs. But what might sound like the house of a royal obsessive is better balanced in reality. Peter’s and partner Sebastien Laboret’s Brighton home may have a smattering of royal kitsch but it’s gorgeously finished and detailed — with choice antiques and a look that is not pinned down to one trend. 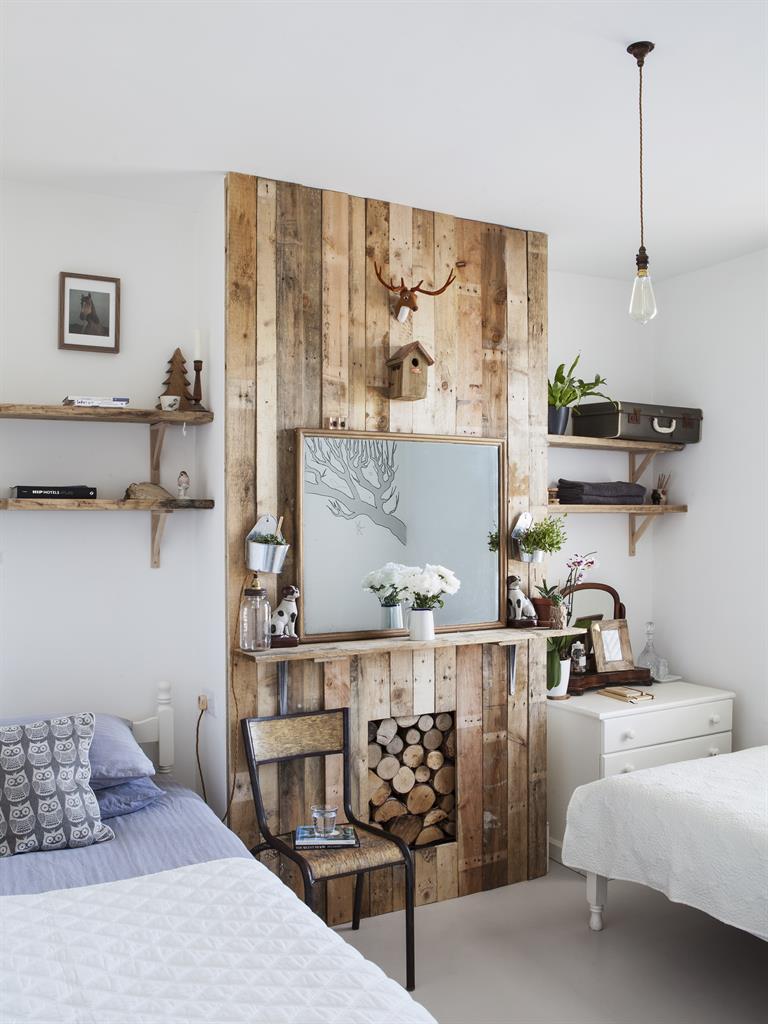 ‘It has been described as rustic country French with a British feel,’ says Peter. ‘We’ve tried to make it as bright as possible with painted floorboards and light tones inspired by the New England style. We used lots of recycled wood all over the house, which has given warmth and character and we’ve tried to avoid making obvious choices.’

Peter and Sebastien bought Number 34, as they call it, in 2013 for £335,000. They were both living in Brighton but worked full-time in London and were looking for a way to dispense with their lengthy commute. They lived in the flat opposite this Edwardian terrace and watched the loft extension going up. When it became available for sale as a half-finished renovation, the pair saw it as an opportunity to get their hands on their dream five-bedroom, three-bathroom home.

Not only could they share it with their cats Jackie, Joan and Cilla, but also rent it out via the then-new phenomenon Airbnb. By renovating the property room by room they were able to rent the finished bedrooms while generating money for further works. 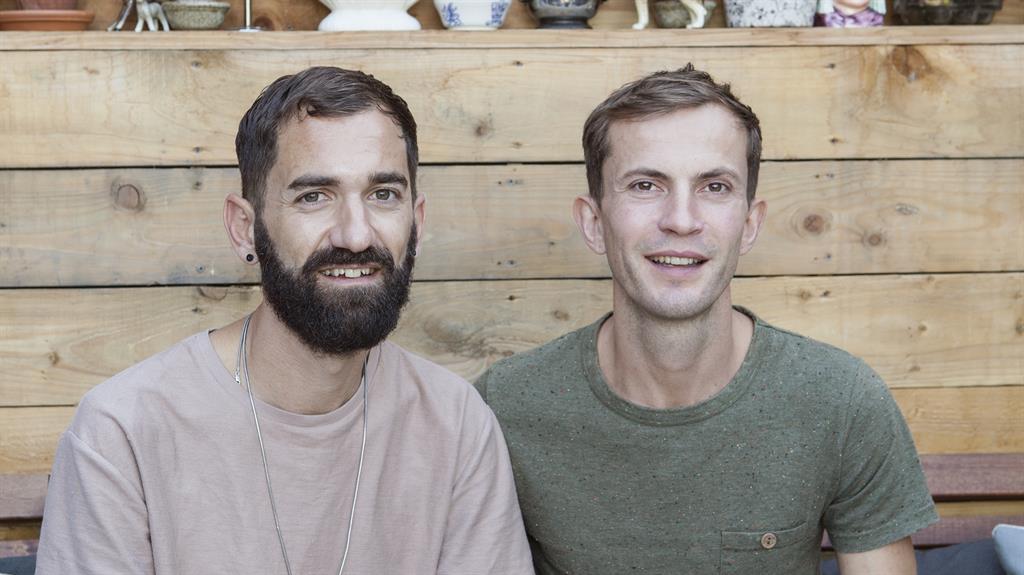 The layout of the property has been left unchanged but the couple added a new conservatory to create extra living space. In addition, they repurposed an impractical U-shaped living area and ran a bank of base units along one wall to open up the space between the kitchen and dining area.

The bathrooms had been finished to a high standard, the cellar excavated and the house underpinned and the loft extension was complete.

‘The only big jobs left were the conservatory and garden, so it meant we could start to earn money back quicker to pay for the intended works.’

The project has been a labour of love as the pair did a lot of the work themselves. Only the carpentry, electricity and plumbing were handled by local tradesmen. 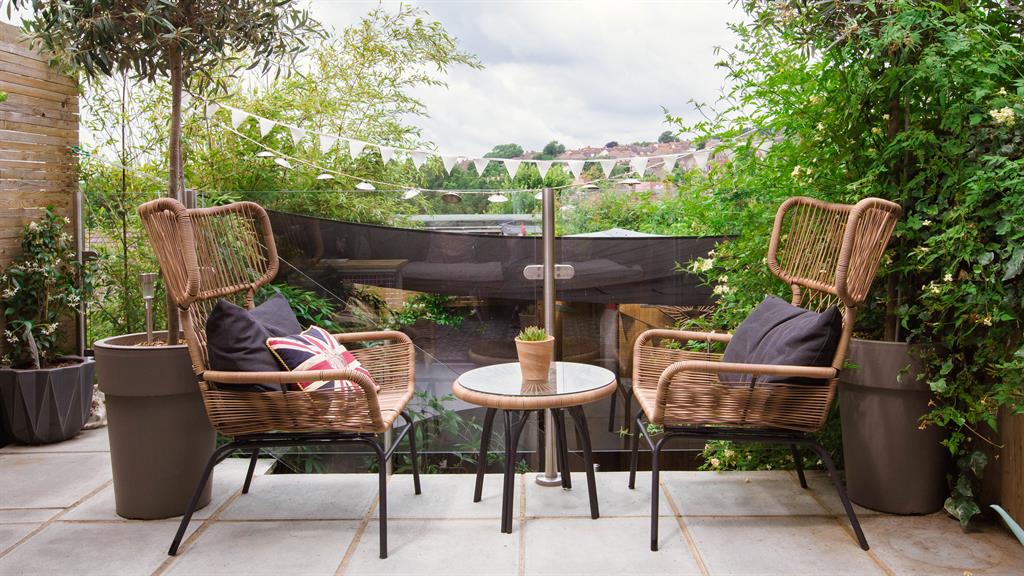 All furniture and home accessories were sourced locally, recycled and reworked to give them a new lease of life. The kitchen was originally a dark terracotta, so Peter and Sebastien renovated the furniture, installed new floor tiles and exposed a beautiful brick wall by stripping its plaster.

They also kitted out the area with a small breakfast bar. The table is from Gumtree and had been deliberately left in the garden to give it a natural patina. There is also a summer house in the garden for entertaining.

The main bedrooms were given a signature look and name: silver, gold, copper and wood. The rooms can be rented separately or the whole house can be shared by ten people, with prices ranging from £42 to £120 per room and £465 to £800 for the whole house. The house itself now has an estimated value of £550,000. They are considering using the same upcycling and renovating model to buy a house with land for a glamping project.

‘Given the house prices in Brighton, we expected to be restricted to living in a flat for most of our lives. This has meant we can have the home we dreamed of,’ says Peter. ‘My mum says it’s because I always had the smallest bedroom as a kid which has given me the hunger to have such a big house.’

For anyone interested in following Peter and Sebastien’s lead and creating their own property masterpiece, whether it is for renting or just living in, there is only one place to go. The London Homebuilding & Renovating Show returns to ExCeL London, from September 22 to 24, providing inspiration, practical help and resources to turn visitors’ property ambitions into reality.

The event offers serious self-builders and renovators the opportunity to discover more than 360 specialist exhibitors and access 750+ advice sessions, 45+ free seminars and masterclasses. On Saturday, visitors will be able to hold 15-minute consultations with celebrity experts such as Charlie Luxton, sustainable architectural designer, and Julia Kendell, interior design expert for BBC’s DIY SOS The Big Build. Go to homebuildingshow.co.uk/london.