THE silence astounds me. Somehow this particular brand of tranquillity is so full and deep it’s like one long, fulfilling sigh.

I’m at São Lourenço do Barrocal, a farm hotel on the north-eastern edge of Portugal’s huge Alentejo region, a two-hour drive from Lisbon. Famous for its medieval villages, wine production and beautiful, sparsely populated plains, it’s one of the ‘natural wonders’ that earned affordable Portugal a place on Lonely Planet’s 2018 travel hotlist.

And I’m walking — ambling, really — between São Lourenço’s various buildings, which are arranged in two wide parallel lines. It’s all whitewashed walls, copper tiles and ivy. But most alluring is the mid-afternoon serenity. With staff members and other guests having vanished, I hear only occasional whispers of wind and my soft footsteps on the cobbles.

Totalling 780 hectares, this land was formerly a royal hunting ground. It then spent two centuries as a farm that sustained 50 families until 1974’s revolution, when it was expropriated by the government.

In 1984 it was returned to the Uva family, then, in 2002, José António Uva — of the eighth generation to own it — commissioned Pritzker Prize-winning architect Eduardo Souto de Moura to create a hotel. It soft-opened last year and is launching this winter season with a wealth of new activities for guests. 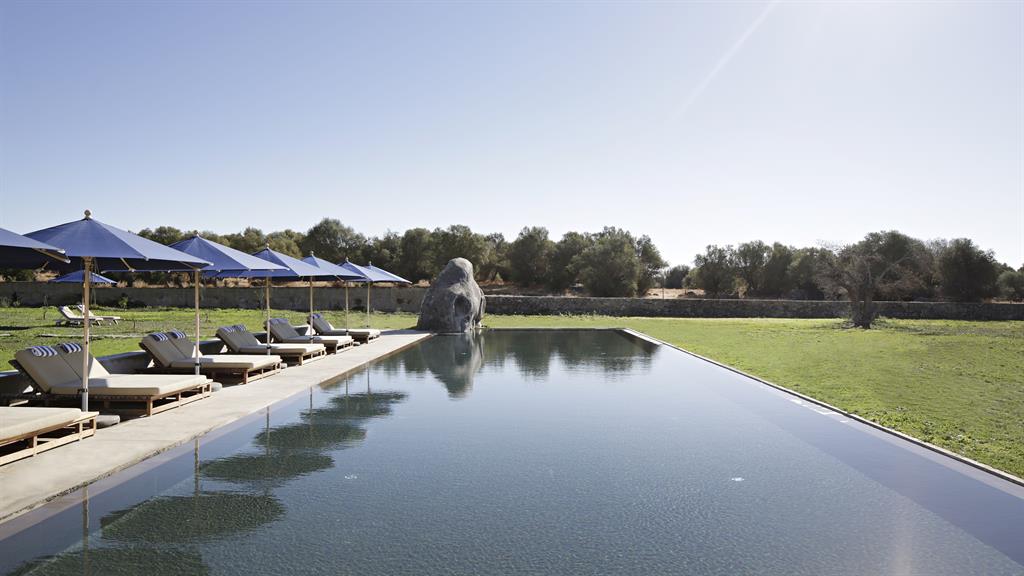 It’s a triumph of vernacular architecture and every painstaking detail refers to the land and its history. More than 2,000 original tiles were sourced over a two-year period for the roofs. The old olive press is a bar adorned with former workers’ family photos. Small batches of organic wines can be tasted (£16) and bronze-coloured cattle roam the fields.

Walk to the slender 20m pool, with its eye-catchingly giant boulder, and you pass old threshing buildings. To the right is a vegetable garden, which the hotel’s farm restaurant gratefully mines. Its pea salad (£7) has a fresh taste that bounces off the plate. Even better is acorn-fed black pork, an Alentejo speciality, with a tomato-bread stew (£19).

From the airy, all-wood kitchen I move on to São Lourenço’s relaxing spa, where Susanne Kaufmann botanical products are augmented by a free cedar-wood hydrotherapy tub.

There’s a similar fusion of rustic charm and understated luxury in the bedrooms. My entry-level farm room outstrips some London hotel suites for size. High ceilings and outdoor terraces amplify the sense of space, while terracotta floors, wooden furniture and a bathtub all appeal. There are some modern concessions — excellent wi-fi, a huge telly — but it’s the large glass lamps and handmade wool throws that impress.

Lounging is tempting but I’m here to sample’s São Lourenço’s brand-new activities menu. The hotel sits inside the Alqueva dark sky reserve and I stargaze with local astronomers (£10.70). Through telescopes we see young galaxies and then the moon’s craters in incredible detail. It’s so overwhelming, my eyes moisten.

They subsequently widen in Monsaraz, a nearby hilltown visible from the hotel. There’s a ruined castle here but the arty pottery shops are the main attraction. Rather than peddling tat, they sell stylish homeware. With hot chocolate-drinking in mind, I buy two big indigo mugs.

Unlike many Portuguese hotels, São Lourenço stays open all year. Winter will hardly be scorching but with other new activities including full-moon horse rides (£98), hot-air ballooning (£152) and kids’ treasure hunts (free), there’s plenty to keep you warm.

My own trip finishes on the Alqueva Lake, which extends into neighbouring Spain. I’m privately ferried by wooden galleon to tiny Isla Dorada, whose sand shimmers gold thanks to silicate minerals. The smooth water tempts but so does stone-skimming. My selected pebble bounces seven — not bad — times before disappearing with a last plop. I listen for other sounds but in vain. That silence is back.

From £155 per night B&B over winter, barrocal.pt 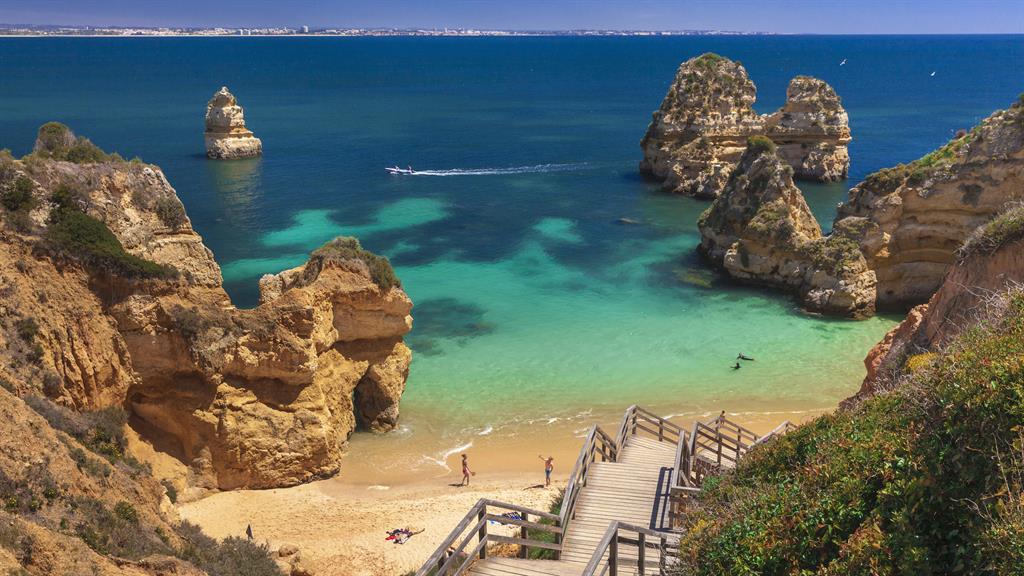 PORTUGAL has been hotly tipped since 2011 as a superb, steady alternative to unsettled rivals like Egypt, Turkey and Greece. That momentum is picking up with Lonely Planet hailing its affordability and including the Iberian country in its ten Top Countries for 2018.

It has 300 Blue Flag beaches, two new biosphere reserves, museum openings and a wave of newly Michelin-starred restaurants, including Antiqvvm in Porto and Loco in Lisbon.

At the recent World Travel Awards, Portugal was anointed Europe’s Leading Destination with the Algarve region triumphing in the Beach Destination category.

Falling airfares help too. According to flight-search engine Skyscanner, the cost of trips to Portugal has dropped by 11.9 per cent this year. This might be due to new services: national carrier TAP Air Portugal recently launched flights from London City to Lisbon, for instance.