THE Queen last night urged the nation to ‘remain united and resolute’ and come through the coronavirus crisis together as she echoed the wartime words of ‘forces’ sweetheart’ Dame Vera Lynn, vowing: ‘We will meet again.’

In an historic televised address, she warned that Britain ‘may have more still to endure’, but insisted: ‘We will succeed — and that success will belong to every one of us.’

The speech — filmed last week at Windsor Castle — was only the fifth time the 93-year-old monarch has made such a broadcast.

The previous addresses were for her Diamond Jubilee in 2012, the Queen Mother’s death in 2002, before Princess Diana’s funeral in 1997 and at the start of the first Gulf War in 1991.

Dame Vera, who turned 103 last month, has urged people to show solidarity and her most famous song We’ll Meet Again was echoed by the Queen last night. In a ‘deeply personal’ message, she told viewers: ‘We should take comfort that while we may have more still to endure, better days will return.

She said: ‘It reminds me of the very first broadcast I made, in 1940, helped by my sister. We, as children, spoke from here at Windsor to children who had been evacuated from their homes and sent away for their own safety.

‘Today, once again, many will feel a painful sense of separation from their loved ones. But now, as then, we know, deep down, that it is the right thing to do.’

The broadcast was recorded in the castle’s White Drawing Room so an appropriate distance could be kept between the Queen and the only other occupant — a cameraman wearing personal protective equipment.

It featured footage of NHS staff, workers making deliveries and military personnel helping construct the NHS Nightingale Hospital in east London. People taking part in the Clap for Carers tribute were also shown, along with rainbow pictures drawn by children.

The Queen said: ‘The moments when the United Kingdom has come together to applaud its care and essential workers will be remembered as an expression of our national spirit, and its symbol will be the rainbows drawn by children. I also want to thank those of you who are staying at home, thereby helping to protect the vulnerable and sparing many families the pain already felt by those who have lost loved ones.

‘Together we are tackling this disease, and I want to reassure you that if we remain united and resolute, then we will overcome it.

‘I hope in the years to come everyone will be able to take pride in how they responded to this challenge.

‘And those who come after us will say that the Britons of this generation were as strong as any.’ 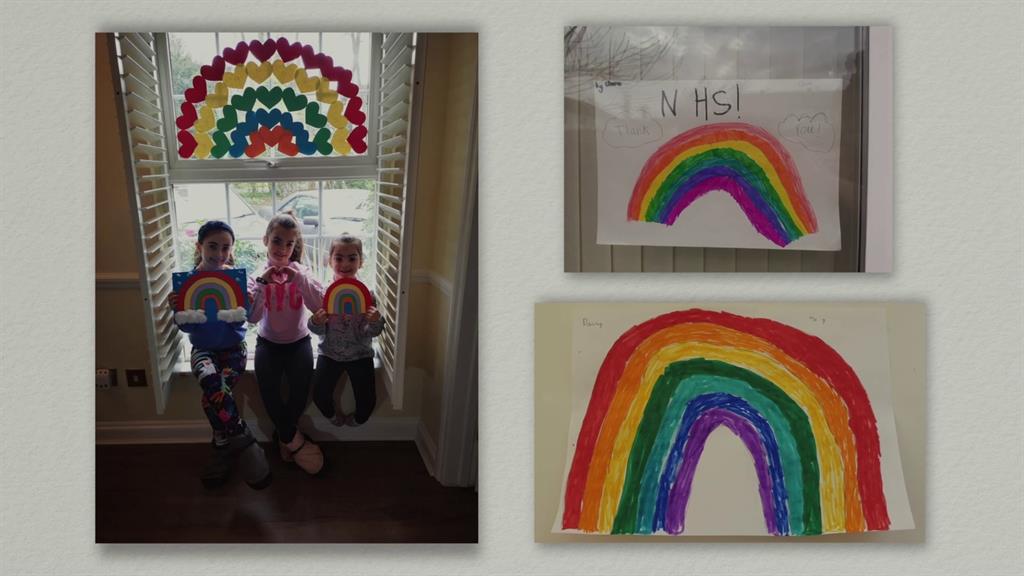