THE formidable turquoise gates rumble open, Jurassic Park-style, onto a long winding driveway in the Kent countryside, flanked by gargantuan sculptures that appear like twisted creatures roaming the grounds. The property at the end has a lot to live up to.

Luckily, it doesn’t disappoint. At the top of a steep incline stands 1,000 tonnes of glass and concrete that is part space station, part castle and part sculpture with a twist of post-war Californian modernism. Constructed around two huge cylindrical forms, it certainly does have a lot of parts, but it is none of the above.

Fittingly, this hulking property on the outskirts of Faversham is the home of Jeff Lowe, the acclaimed British sculptor, who has been pushing the boundaries of abstract sculpture since he came to prominence in the mid-1970s. As with the metres-high steel and iron pieces that inhabit the spaces outside, the building, a former water purification plant originally built in 1937, challenges the integrity of the ground on which it stands.

Lowe has been restoring and building The Lime Works for the past three years. And the property’s architecture has had a strong impact on Lowe’s work, too, as seen in his recent solo exhibition In The Close Distance at Pangolin London, with cutouts and curves reminiscent of the portholes and windows that punctuate its surface.

Standing at the top of the double staircase leading up to the front of the property, Lowe cuts a formidable figure, backed by the fort-like structure. ‘I’ll give you a quick tour then we can have a cup of tea,’ he says affably on meeting.

Jeff shares this unique property with his wife, Monica, and two rescue dogs from Portugal — Thomas, a Pointer Doberman mix and Moses the smaller and younger mongrel. 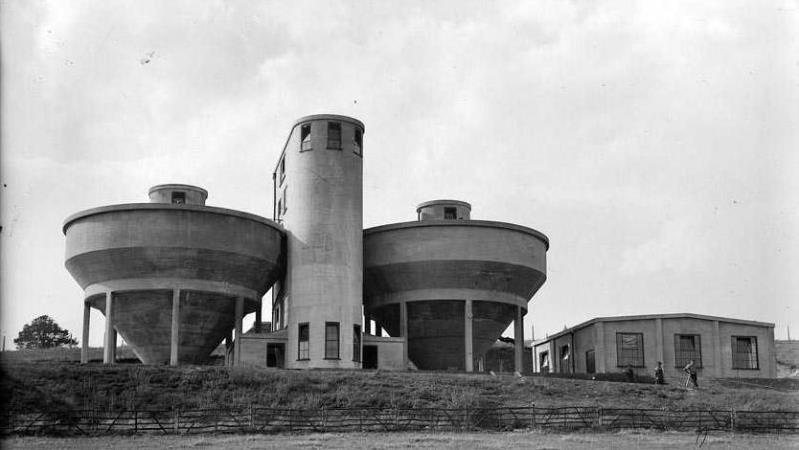 The front door opens almost immediately into the central column, which houses the dining room, complete with a table that appeared in Broadchurch that has a ridged and pitted surface that Jeff likens to a sculpture. Two pillars from a Victorian circus tent mark the entrance to the circular kitchen and there’s a pair of mismatched, hand-painted Georgian doors. The ceiling is three-storeys high and painted black to hide its height, while the original metal staircase clings to the wall all the way to the top.

Almost no one would think to fill a converted art deco industrial building with Arts and Crafts chairs, Indian carved ladders mounted like sculptures, Victorian curiosities and flame lights, but Jeff has confidence in his own taste. ‘I could have filled it with just art deco,’ says the 67-year-old, ‘but I feel that would have been too obvious. [When I create something] I can’t tell you how it will look. I don’t design it, I piece it together. You need to spend time in a space to see what you want.’

Above the door is a small ceramic head placed in the centre of an ornate, carved wood panel and lit by a giant art deco pendant that once hung in the National Geographic HQ. Jeff bought the head 40 years ago because it looked like his father, a WW2 Spitfire pilot who sported a large moustache. ‘It seemed like the perfect place to put my dad’s head,’ he says

While travelling to Canterbury to lecture, Jeff would see the semi-derelict building, partially obscured by pines that had been planted around it by a local vicar who deemed it ugly. The building had been partly converted into a place to live but the project was abandoned.

With little interest in taking on such a task, the price dropped steadily until Jeff decided to take the plunge. ‘I put in a sealed bid and part of me hoped I wouldn’t get it. There was no heating, plumbing, or anything really — when I got the key it was December and even colder inside than out.’ 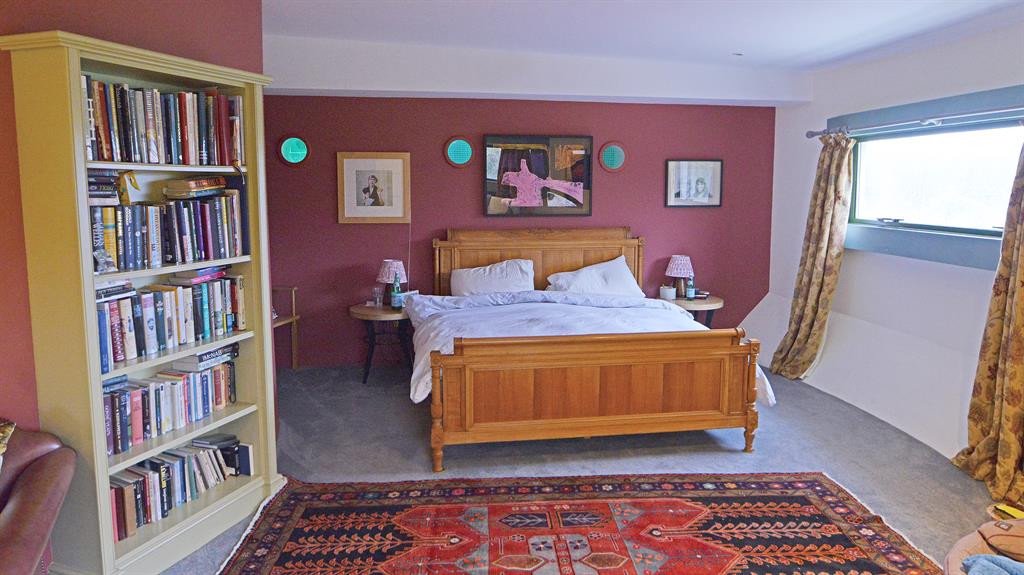 But a memory made the property seem like fate. ‘When I was 12 or 13, I had a dream about a building that was like a M. C. Escher drawing. When I bought this property, I realised it was from the dream. In that dream I had a real excitement about one day buying the house — it was an endless space.’

On one side of the ground floor is a circular living room with four large sofas. It also has a considerable stone fireplace taken from a Scottish castle and bought from English Heritage. Floor-to-ceiling windows surround the inverted concrete cone that once was filled with lime.

The second cylinder is a circular gallery for Jeff’s sculptures that morph interestingly with giant antique cabinets — after a while the boundaries between art and design become blurred.

In this room, the cone can be entered. It is purposefully space age and the concrete stair leading into it deliberately hovers over the ground as if it can be folded back into the structure ready for take-off. ‘It’s like entering the mothership,’ quips Jeff.

A curving staircase winds up to the living areas, where the four en suite bedrooms are named after artists such as Matisse and Picasso and packed with antique French beds and period cabinets.

It is easy to get lost in the winding, irregular corridors. ‘It keeps you fit,’ Jeff calls back cheerily, leading into another section of the house, home to a gym and sauna. The colours of the house are picked by Jeff from a heritage chart that he uses for his artworks. He just picks from terracottas to blacks to deep blues, what he thinks will work, gets it mixed and goes for it with no regrets. 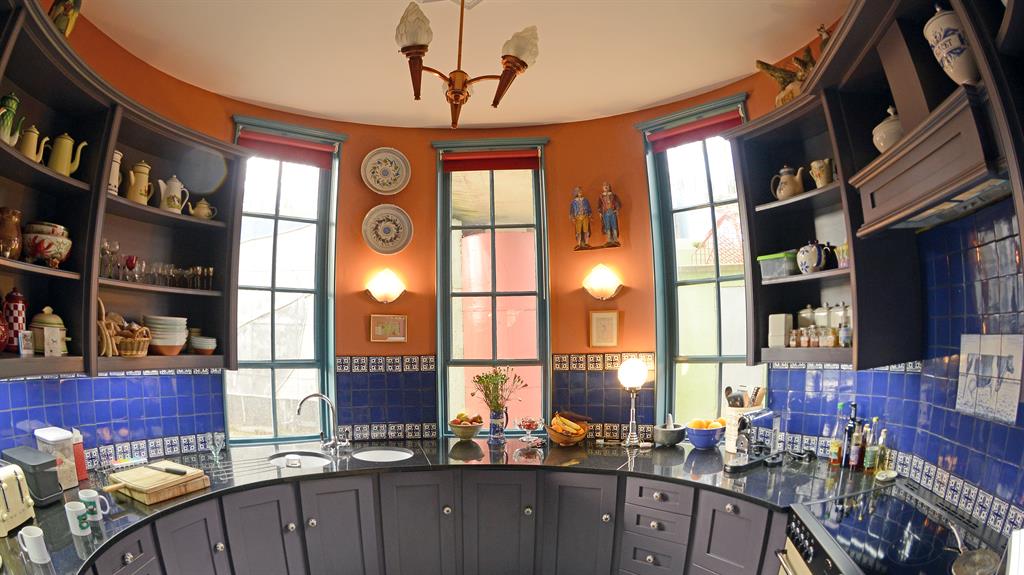 Jeff’s studio is next to the house and he has found new inspiration since moving here from central London. ‘I feel more focused and more peaceful here. The house has had a huge influence on me as a sculptor. Before, my work was blocky and industrial but now I have started working with curves, my work has layers.’

In the master bedroom, small portholes look directly onto the rooftop swimming pool — a David Hockney-style vision. Palm trees and painted loungers evoke California. The highest room is one level up on the peak of the tower, a study that looks out over the Kent countryside.

‘Sometimes when I drive back here, I can’t believe I actually own it,’ says Jeff. The house is party to plenty of entertaining, playing host to his artist friends and neighbours, including the likes of Sir Bob Geldof and British painter Rose Wylie.

‘I like it when people come here and I know they like it,’ says Jeff. ‘It’s a bit like an exhibition. It’s important that the home is a reflection of my personality — for me it’s a self-portrait.’

■ Jeff’s sculptures and new silkscreen prints can be found at jeff-lowe.com