A METAL detector might not be on everyone’s birthday list, but it was Andrea Pyle’s dream present. Andrea and her husband, Duncan, are architectural designers who bought some dilapidated, Grade II listed barns on the Somerset Levels in 2012 to convert into a family home. The farmland containing the barns was, until 1991, owned by the Duchy of Cornwall. ‘Since moving here we’ve discovered all kinds of interesting historical items, including some beautiful old hinges that are stamped with the three feathers from the Prince of Wales estate,’ Andrea says. ‘We keep unearthing little bits, so Duncan bought me a metal detector for my birthday. I can’t wait to get out and use it.’

After coming across the barns on a commercial website, the couple were hooked on their first visit. ‘They were run down, full of bats and the grounds were overgrown but as soon as we saw them, we knew this was exactly what we’d been looking for,’ Andrea remembers.

hey’d already worked on a number of barn conversions professionally and were adamant this is what they wanted for themselves and their two teenage boys. ‘We both love the heritage element of it and we also wanted a bit of land. A barn is a very honest building, you can’t conceal anything or make it something it isn’t. ‘It’s a challenge because you generally can’t add openings like windows and the fact it’s listed means there are more restrictions. But we both loved it. I especially like the fact it’s a courtyard as I grew up in a house with one.’

The stunning three-bedroom, three-bathroom conversion is one of three barn buildings around the courtyard and is just the first stage of their plans. Next they plan to convert the second barn to add a further two bedrooms and bathrooms with sitting room, kitchenette and utility — a project they think will take around nine months, They will create further bedrooms in the third barn, which will also have a huge dining area/party space. ‘If both boys are home we currently have no space for guests so it will give us that, and might allow us to do holiday lets,’ Andrea explains. 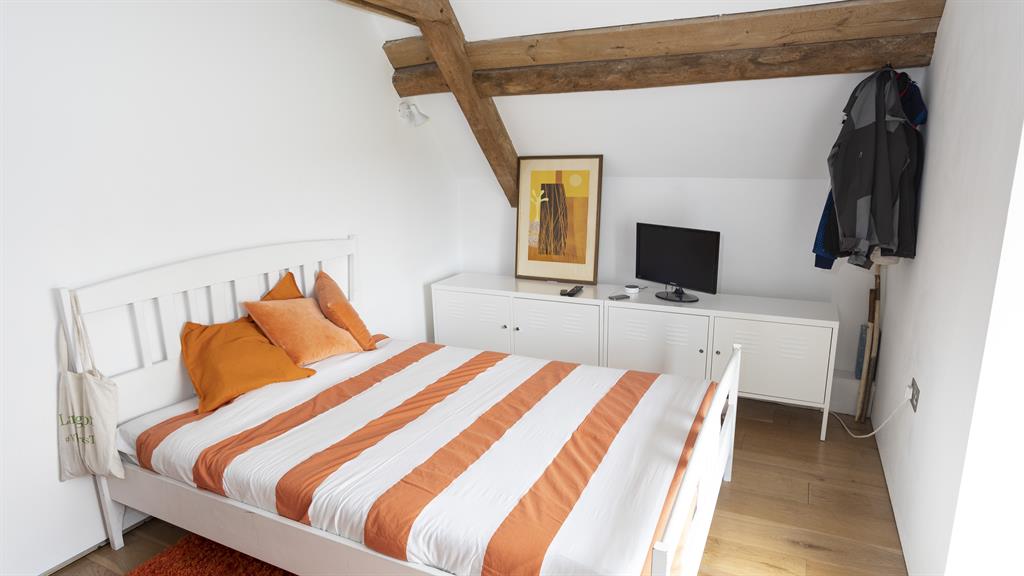 Although the property is beautifully calm with natural light flooding the open-plan living area, it’s not always been such a zen process. ‘We bought the place in summer 2012 and didn’t move in until Christmas 2014 — so the four of us and our dog lived in a caravan for almost two years while we were renovating. Summer in the caravan was lovely, you could hear the birds singing and it was just like camping. But the winters were a challenge because you can’t really keep a caravan warm. To be damp and cold isn’t a winning combination,’ Andrea laughs.

Andrea laughs a lot — and that sense of humour is essential, she believes, when taking on any project like this. ‘You need bags of patience, the ability to remain calm because there are always unexpected things a renovation will throw up, and a sense of humour is essential. When we were in the caravan we’d invite friends over, give them blankets and hot water bottles and have these big dinner parties in the barn. We were adamant that we wanted to keep on entertaining. You’ve just got to treat the whole thing as an adventure,’ she recommends. 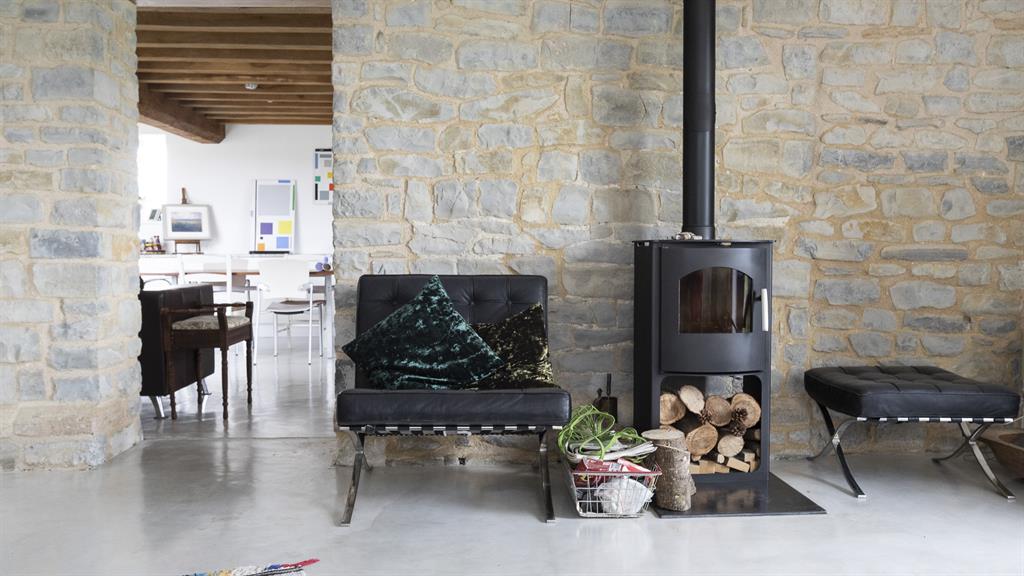 As the property is home to two designers, the look, and feel are immaculate.

‘Both of us wanted to keep the interior simple with lots of clean lines,’ says Andrea. ‘Life is so busy and everything is so cluttered, I subscribe to the Japanese way of thinking that your head can get overwhelmed if you’re not in a calm interior.’

Sustainability was also a key factor. ‘I think it’s a no-brainer. We have underfloor heating, ground mounted solar panels as Duncan didn’t want them on the building itself, high spec glazing, heavy insulation everywhere and ground-source heat pumps. It also makes sense from a commercial point of view. We see more and more clients who don’t want to be paying huge utility bills.’

Andrea says that doing a renovation personally is no different from doing it professionally. ‘We followed all the things we tell our clients do everything in the pre-planning and don’t change your mind, have a bigger contingency pot than you’d imagine you need and finish one part of the project before embarking on the next.

‘I’ve seen clients who’ve moved in, pulled everything apart and then have hit hard times and found themselves in an unsaleable property. Doing it in stages like this has made it more financially manageable. If we wanted to stop now we’d have a home with two barns attached.

‘All of that is down to Duncan. He has a calm, measured approach, which pays dividends. I have the greatest professional admiration for him. Even though he sometimes drives me nuts, he’s the best designer I’ve ever worked with.’ Living together, working together and renovating together? Andrea and Duncan know almost as much about making a relationship work as making conversion projects work.

A few of their favourite things 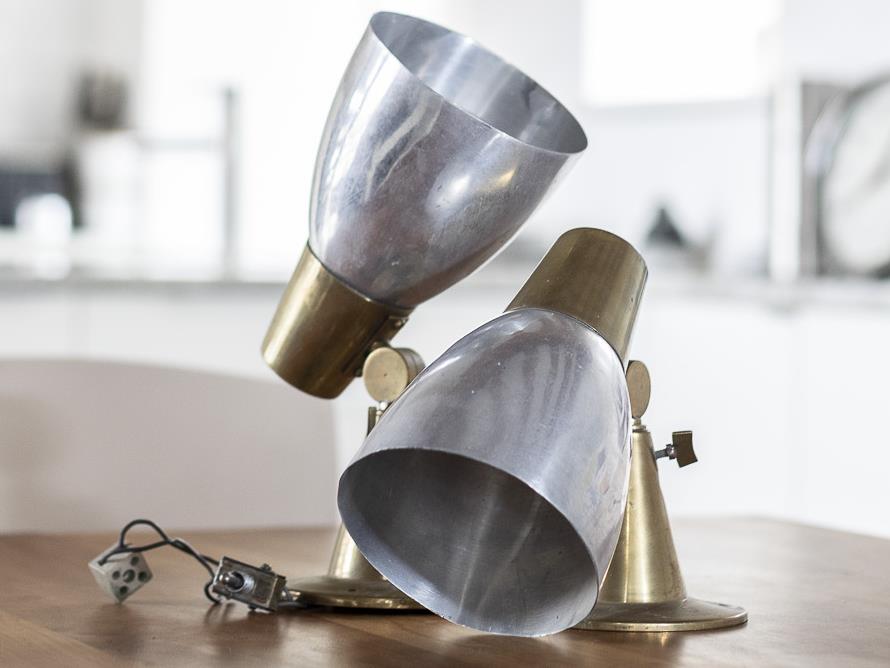 The lights, which are waiting to be rewired, are destined for Andrea and Duncan’s bedroom as bedside lamps. They’re from Trinity Marine and came off a Japanese ship from the 1950s. trinitymarine.co.uk 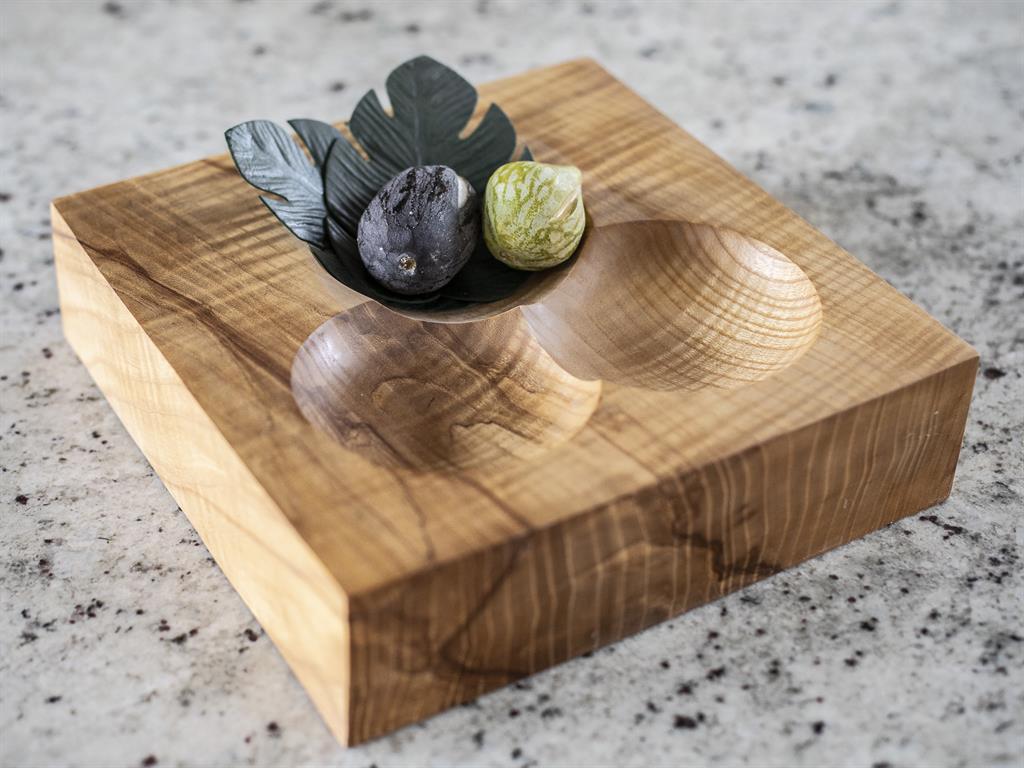 The wooden block with bowls was designed by Andrea who commissioned Paul Boak, a Somerset wood artist and friend. first-view.co.uk 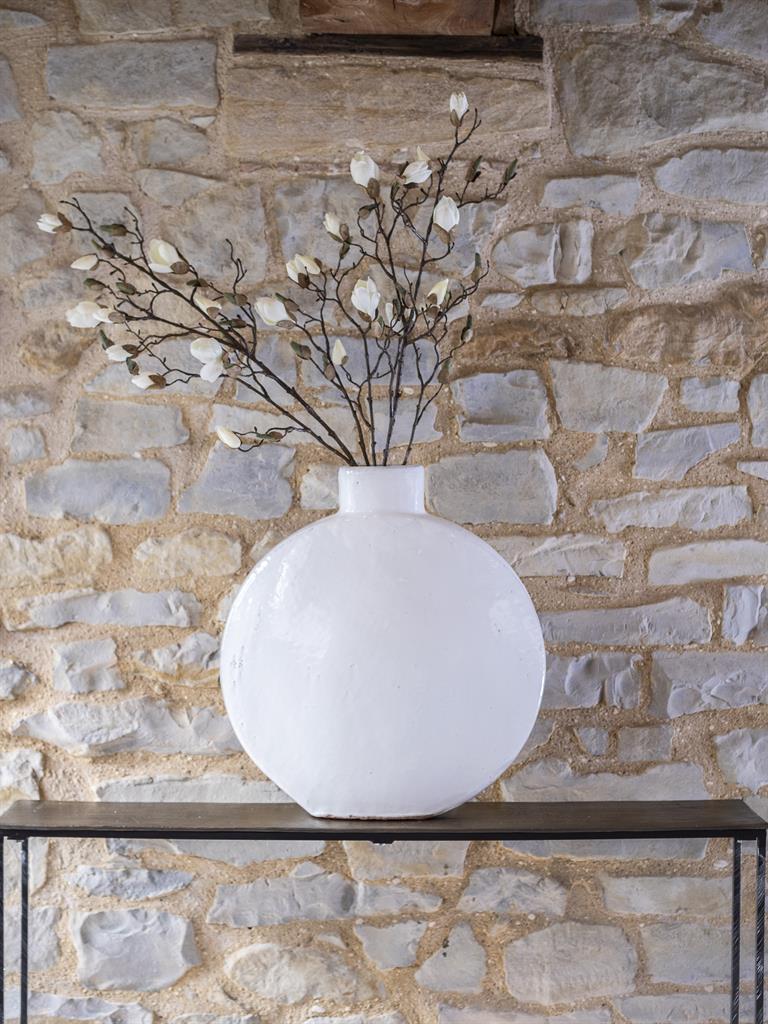 The large circular pottery vase came from Lafleure in Langport. Lafleure can be found on facebook.com/LafleureLangport 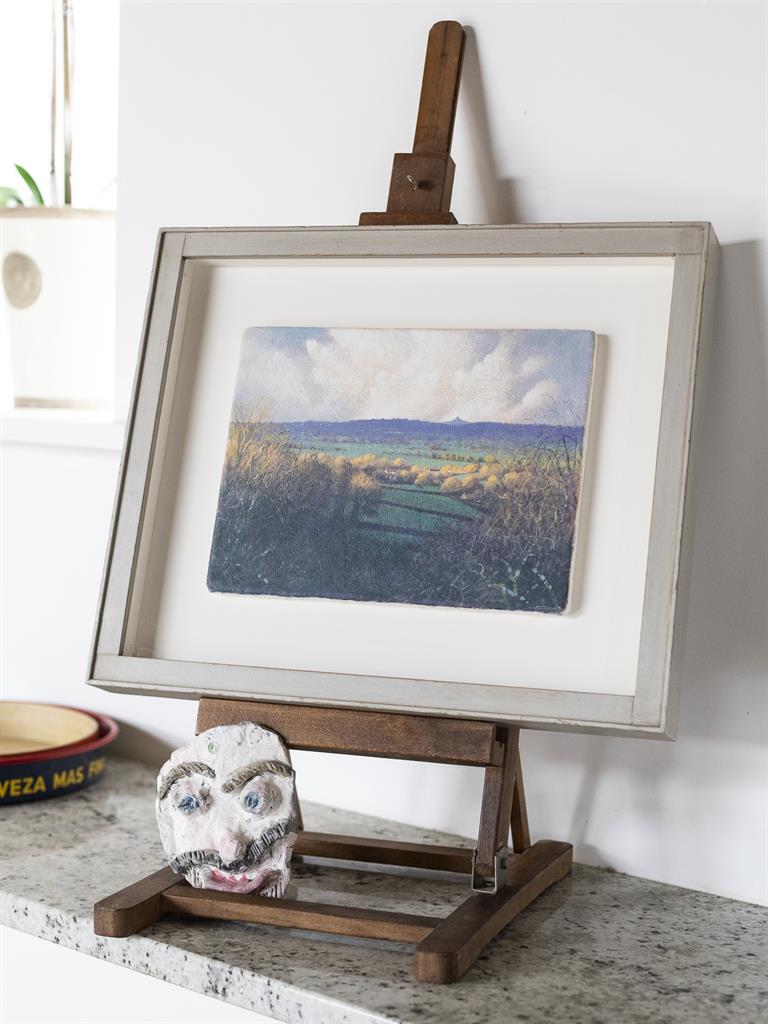 The painting is by James Lynch, a local artist who paints in tempera. James has unusual perspectives on Somerset landscapes as he paraglides. This was commissioned for Duncan’s 50th birthday, james-lynch.co.uk 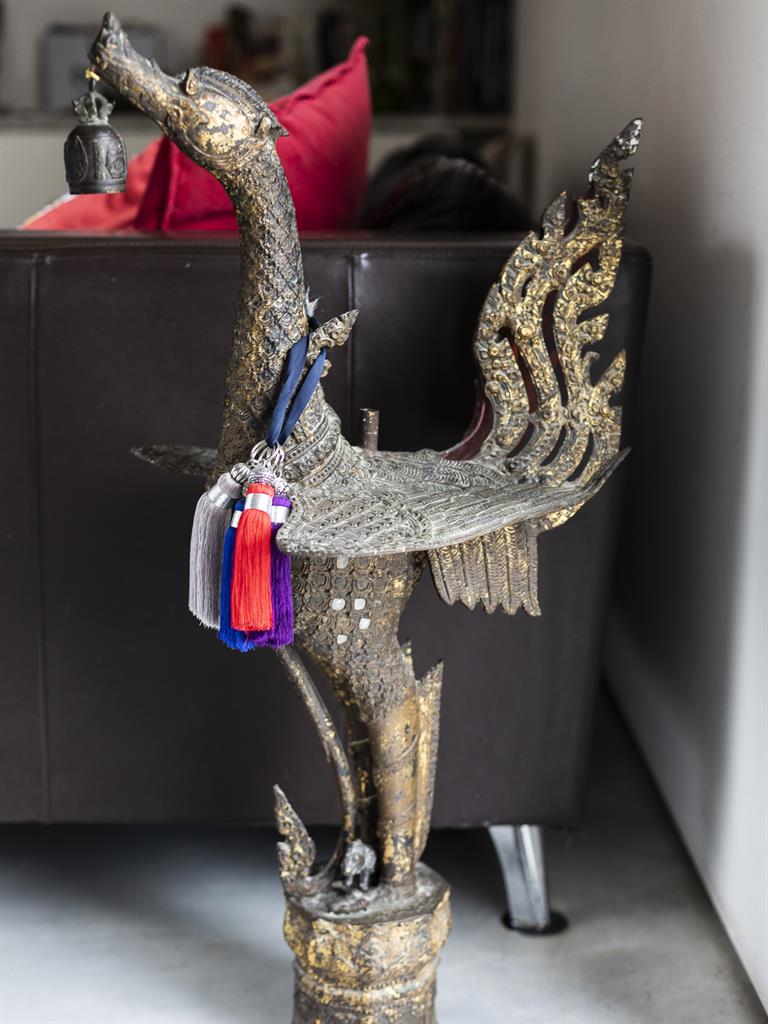 The bronze phoenix is 19th-century and Thai. Andrea and Duncan brought him home from a flea market in Paris in 1990. His role is to protect the house, and he has been with them ever since, watching over every home they have lived in.

■ Duncan and Andrea Payne of o2idesign.com will be at the National Homebuilding And Renovating Show, March 28-31, NEC Birmingham, homebuildingshow.co.uk