STEPPING into someone’s home is always a glimpse into another life, but an exclusive invitation to visit the Brothers Quay’s south-east London flat is somewhat akin to being transported to a different world and time altogether.

Just a few metres from Cole Street in Borough, where hungry tourists hunt artisan sausages at the famous market, the home of identical twins Stephen and Timothy Quay is like walking through a porthole into a make-believe land.

Fans of their work, such as Hollywood director Christopher Nolan, will be familiar with the Brothers Quay’s peculiar and acclaimed animations [Street Of Crocodiles and Institute Benjamenta being the best known], which are chock-full of dusty fairytales and fragile nightmares. This apartment was an opportunity for them to create a lifesize version of what they create on screen with puppets and stop-motion animation.

It was in 1999, when they found the property, which was conveniently located a stone’s throw from the small, magical London studio, filled with crumbling dolls’ limbs and antique camera equipment, that they had worked out of for three decades.

Their blank canvas was a shell space in a converted Victorian box factory, built in 1820, and complete with dual-aspect space on the lower level and living area on the mezzanine level.

On first viewing, the flat wasn’t much to look at, reckons Stephen. ‘It had steel girders and raw, unadorned concrete walls and was therefore very unpromising. But the saving grace was the plethora of original wooden beams which could not hide the potential character of the place. 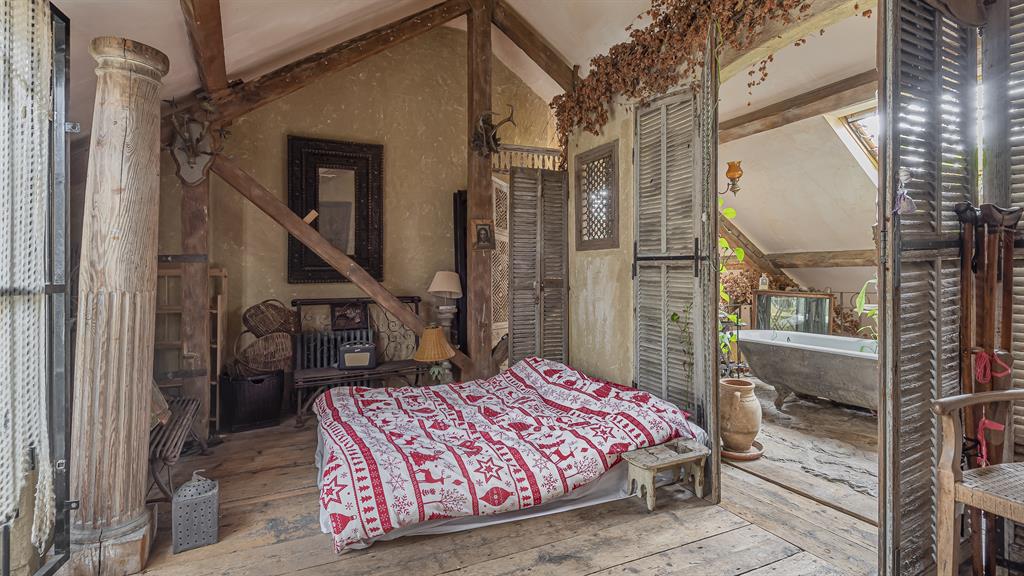 ‘The steel girders were covered with a fine sandstone texture, as were all the walls, and ultimately it begged for furniture which then became a kind of cinematic and theatrical incarnation of space.’

Timothy adds that the concept would be to escape the world as soon as you walked in.

‘One could leave the street and enter into a space which became a kind of modest sanctuary,’ he says. ‘Of course, this is not special or unusual for anyone who also seeks the same condition with the role of interior design. However, in our particular case, it just came to this.’

When the door closes, busy, modern London is left behind. Aesthetics are led by emotions and everything is imagined and created for a theatrical effect and an emotion. Browned, dried-out hops creep from room to room, secured into every nook and cranny. One moment you are in an Austrian tavern, perhaps in a Robert Seethaler novel, the next in a Victorian ghost story, the furniture and fittings doodled and scribbled into a four-walled sketchbook of ideas.

‘The inspiration comes from many impulses, combined both theatrically and cinematically as a décor that feeds the imagination of both,’ says Stephen. ‘Hops were suspended everywhere to give the feeling of being in an Austrian heuriger, which is a kind of rustic inn-like place where the new wines were being tasted. In short, you entered a very theatrical space that could be solitary or boisterous. Neither was excluded.’

Everything here has a story. The unusually wide pine floorboards were reclaimed from an architectural salvage yard in Kent and had originally come from one of the 19th-century warehouses in Butler’s Wharf, so they were, in fact, returned to SE1.

The pattern of the floorboards was derived from the baroque Drottningholm Palace Theatre stage near Stockholm, which still functions today as an Opera House.

The walls were made to look more like the exterior façade of a street. They have a baroque engraving of a hunter shooting a deer at one end of the room and the bullet arriving at the other where two leaping deer, with real antlers, protrude from the wall.

The bullet had to pass through a pine cone hung on invisible thread in an arched altar recessed into the wall, halfway along the surface.
‘We don’t hold extravagant opinions on interiors. However, it has to be said that in the making of puppet films and décor for theatre, opera or the ballet, one is very conscious of how space is to be perceived and how the eyes and ears are led imaginatively into that space.

‘That is what a décor evokes for the imagination,’ explains Timothy.

In both the kitchen and the bathroom, there is original Yorkshire sandstone on the floor. A Victorian spiral staircase takes you to the mezzanine – a practical addition considering the space.

‘Unlike a clumsy set of wooden stairs, the spiral staircase is filigree and therefore so much more porous. None of the interior space is blocked by its presence and it actually takes up less space,’ says Timothy. 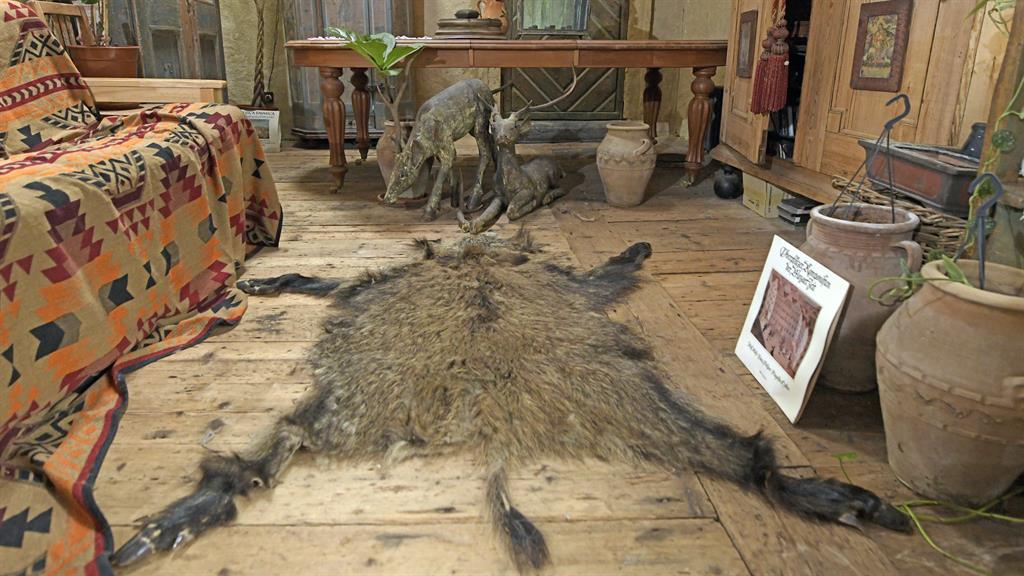 Most of the furniture is 19th-century Swedish, Hungarian, Danish and French. The vast table in the centre of the room is a tailor’s table from Paris and was used for cutting patterns on. There is also a 19th-century Austrian farmhouse door which is used as a false door to the next flat.

‘Of course it’s an impostor but it gives a meaningful impression of what closed doors leave to the imagination,’ adds Stephen.

In the far corner, there are also two huge spectacular Afghan doors with sumptuous carving, hinged at a ninety-degree angle to conceal a freezer. There is also a baroque vitrine with a half-sized Madonna inside it and the most beautiful filigree metal tiara that was found in Lisbon. A 19th-century wooden Italian saint was purchased for a commercial.

Timothy says: ‘We pursue objects with a genuine ferocity, including certain ecclesiastical metal furniture which is highly non-functional but which is beautiful to behold.’

Timothy adds: ‘We don’t think in terms of what is or might be trendy but we are tempered by the examples of the rural Amish people from our state of Pennsylvania [where the brothers are from originally] as well as the flights of the baroque by the Asam Brothers in Munich.

‘In between those two extremes is the potential of interior design, which is architecture turned inside out. The Bauhaus made a particular case of that, too.’

After 30 years, the Brothers Quay are moving out of their studio and are also now looking to sell the flat. The next stop, they say, would be a space for both the flat and the studio.

‘It looks like we will end up in a barn in Basingstoke or Kent,’ says Timothy. ‘[This flat] would clearly have to suit someone or a couple who might just have an inkling for preservation and who might just muse and say that this was a space that didn’t arrive accidentally.

‘And they might just know who the authors were.’