THEY say an Englishman’s home is his castle, but that certainly rings true for property developer Trevor Wynne-Jones more than most. Indeed, it seems a disservice to call his wholly original 7,000sq ft seven-bedroom, six-bathroom residence a house, though Trevor — who has built the property himself over 30 years, without a designer or an architect — has certainly made it a unique place to live.

With its intricately landscaped gardens, including pools full of koi carp, moats, canals and waterfalls, it’s a hybrid of a castle, a Venetian palace, and a ‘ruined’ abbey.

There are more copies of famous artworks and bits of architecture — discovered and adored by Trevor on his travels — than you’d find in Las Vegas. It seems appropriate that the path around part of this lush garden is called the Yellow Brick Road and contains 72 manhole covers that hide all the high-tech utilities and services.

Indoors, there’s a cast-iron spiral staircase, vaulted brick ceilings in the cavernous underground Abbey Rooms (the ‘ruined’ gothic abbey, a copy of Tintern Abbey in Wales, is sited just outside in the garden), a lavish, bespoke wooden staircase in Polish ash (Trevor bought the whole tree and built the staircase in his huge underground workshops in the property), and hand-carved ‘his and hers’ thrones, made by his full-time team of craftsmen, which sit alongside a medieval-sized fireplace. There are also suits of armour guarding corners of the living room and even echoes of the Sistine Chapel, with lavish frescos on walls and ceilings, including one with glittering cherubs on the ceiling of a guest loo.

This is Trevor’s very own Brigadoon, created on the one-acre site of a former run-down bungalow in rural Wraysbury, near Staines, that he bought for £13,500 in 1966.

After decades of creating his own renaissance palace, which he says is still a work in progress (the next plan is to replace the outdoor swimming pool with a lavish music room), it’s fair to say the neighbours have not always been impressed. 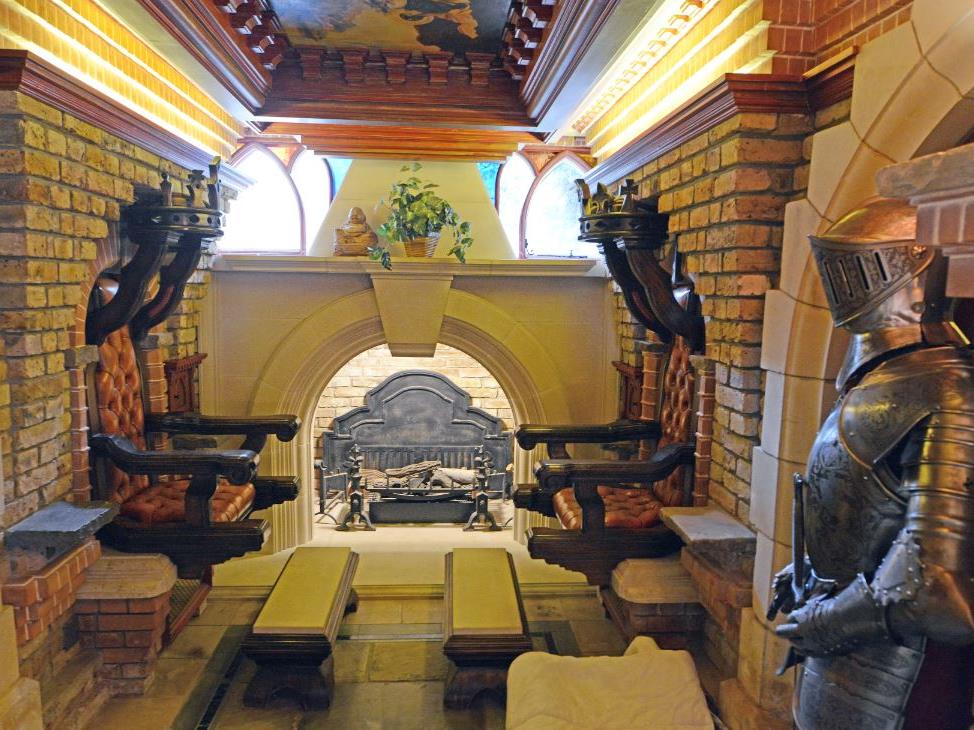 ‘I’m a romantic and I love beautiful things,’ Trevor explains as he greets me in his office, where vast reproductions of paintings depicting Napoleon’s battles have been re-peopled with the faces of people he’s worked with, or who have worked for him. ‘This is my chance to be an artist. It’s what I wanted to do when I was young, but my father told me there was no money in it.’

Certainly, the house and gardens bear little resemblance today to the property he bought (and promptly demolished) more than half a century ago, nor its bigger replacment that he began remodelling in the 1980s. Or indeed to the tulip-growing fields that originally earned it the name of Dutch Gardens — a moniker Trevor has kept.

Indeed, it bears little resemblance to anything I’ve ever encountered in Britain. If Willy Wonka had a country home, it might look like this. Or perhaps eccentric Victorian architect Sir John Soane could have created something similar as his quirky country retreat.

‘Do you like it?’ a waistcoated Trevor asks me proudly, when showing me the master bedroom, where there’s a hand-painted recreation of John William Waterhouse’s Hylas And The Nymphs (a Greek legend) on one wall, while ornate paintings adorn the ceilings.

The room itself is a picture — with a canopied bed, enormous marble fireplace and solid, bespoke curved furniture, matching the décor, in shades of green and gold. The en-suite bathroom is a vision in marble with a giant bronze Buddha holding court from a niche near the ceiling.

‘People say to me, “How can you mix all these styles?”’ Trevor admits. ‘I know it’s a bit of a fairy tale when you walk around it. But somehow it just works.’

He has kept pretty much everything local, too: the house and environs have used more than a million yellow London stock bricks — and his team of craftsmen have created his replicas with exquisite skill and impeccable detail.

Everywhere you look, there are surprises — unexpected skylights, secret windows (the property is bathed in light), intricately carved arched doorways and hidden treasures. 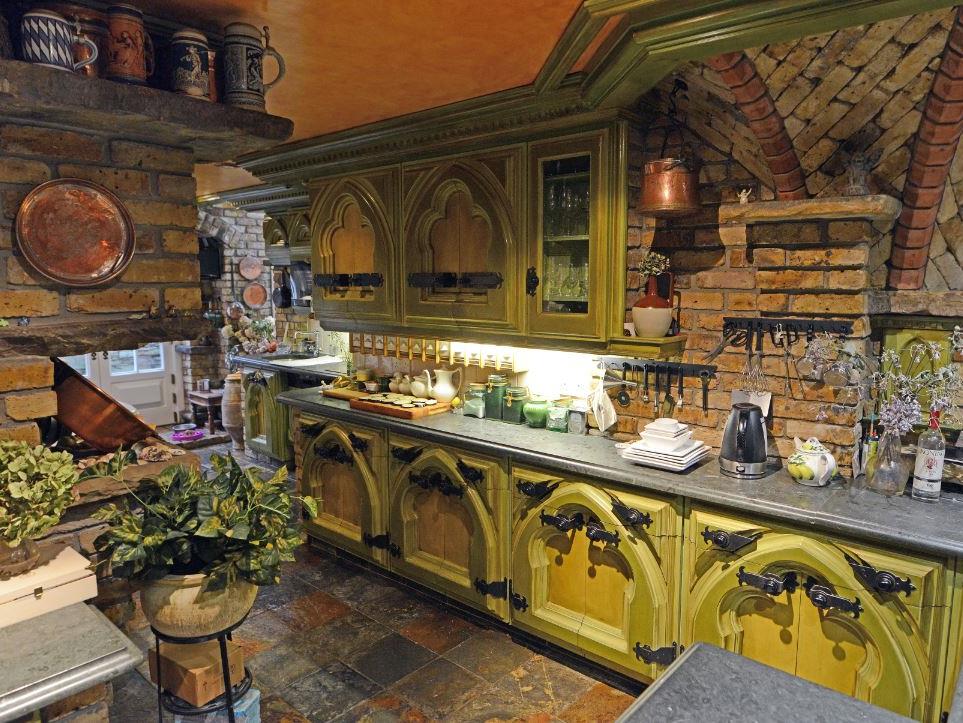 Even the linen cupboard is tucked away behind an enormous gilt-framed mirror on the first floor. Trevor has utilised every inch of this marvellous fantasy building — he even threw Punch And Judy shows in the ‘ruined’ abbey and held jazz concerts in the vaulted Abbey Rooms.

But this is also a modern house, with all the technological gubbins hidden in secret cupboards and beneath panels.
There is little doubt that Trevor loves this house, which is indelibly part of him. So why is he now, as he enters his ninth decade, planning to sell? ‘Ah,’ he says. ‘I have a new lady, now, who I call the Contessa [I meet her and she is indeed delightful], and we thought we might like to live in Vienna or Venice. I’m getting older and this is a large place to manage. But if I move, it will be to something simpler, though with history.

‘I don’t think now, at my age, I could ever create anything like this again.’

■ Dutch Gardens is on the market for £4million, waterview.co.uk