THIS could be London’s best view — or rather, views. Walk onto more than 4,000sq ft terrace of the penthouse at One Tower Bridge, turn left and you’re met with The Shard towering in front of you like some cartoon Alpine peak. Rotate 90 degrees and the River Thames runs a few hundred metres below; left again, and you have Tower Bridge, so close you feel like you can almost touch it.

Throw in the Norman Foster-designed City Hall just below, The Walkie-Talkie (20 Fenchurch Street), and The Gherkin (30 St Mary Axe) almost directly over the river, and the owner of this £10million penthouse has pulled off the party trick of showing guests almost every London landmark before they’ve had a chance to take off their Harrods of London chinchilla fur capes.

One Tower Bridge, one of the capital’s most exclusive new builds courtesy of Berkeley Homes, is the kind of place where you could work and play in London’s most upmarket establishments and not even bother to get an Oyster card.

The spot is pretty much where magician David Blaine once hung for 44 days in a glass box. His box is no longer here, but a giant glass penthouse box of altogether different dimensions takes its place. Entered via a private lobby, this property is mind-bogglingly big.

The living space is on one floor and the terrace-cum-garden is on the upper level. While the inside is impressive, the outside space is like virtually nothing else in the capital.

Celebrated German-born, London-based architect/interior designer Thomas Griem is no stranger to multi-million pound mega-properties around the world, but when he was brought in to take on the inside and out of the showpiece home even he was a little taken aback.‘The struggle was the expanse of the 4,000sq ft terrace on the top, and then you also have a wraparound balcony on the lower floor of 2,000sq ft.’

He laughs: ‘I mean, how many little chairs and tables can you have?’ 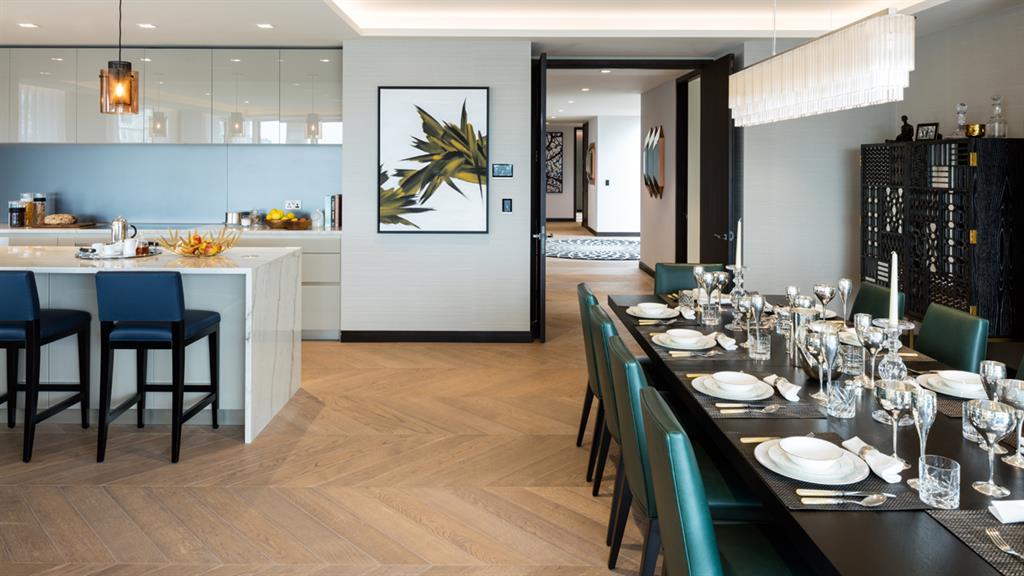 The answer, says Thomas, was to cleverly zone the terrace into a relaxing area and a party area. The former features a jacuzzi, with a soothing sculpture garden that wouldn’t look out of place in a country pile, and a bath for birds. The sculptures were handpicked by Thomas from a collection by Carol Peace, including the beautiful Red Scarf, that greets you as you enter. On the other side of the terrace is your entertaining space, with a kitchen for barbecues and an outdoor dining area for 12 people.

‘I think this could be one of London’s best views,’ says Thomas. ‘It’s because of the landmarks. The first thing you see is the view, which is stunning, it’s a really “wow” effect. You are not so high as to feel above it, but rather you are within the view and feel immersed in it. You see the Thames below you; on a rainy day you see stories unfold: freight, river taxis, tourists, people coming and going from work. Just sitting up here and watching it is really exciting.’

Downstairs, the property has three large bedrooms, an open plan living and dining space, and a grand entrance hall complete with spiral staircase.

Thomas’s company, TG Studio, was hired by the developer with the remit to make a very special penthouse. ‘[These kinds of properties] are very difficult to sell. They are so vast people don’t know to furnish them, how to live in them, how to make them special,’ he says.

‘Plus at £10million, there are not loads of people running around with that money. The main thing with tackling a project like this is you need to help people understand, if it’s a sports hall, or a living room, that’s when we bring life to an empty shell.’

Starting with the layout, Thomas immersed himself in the lifestyle of potential buyers. At this end of the market, 80 per cent of them are likely to be from abroad, he says. Those from China, Russia, and Hong Kong see London as a good investment. This means the style needed to be universal to maximise interest but also with a nod to the location.

‘We have created an international style with a strong London touch. People want to buy a bit of London and we tried to express that. There are some tweeds in there and some buttoned furniture. The sofa has a touch of English to it.’

Most of the furniture has a mid-20th century feel. The Dean armchairs in the living room come from Alter London. There are Ventura lounge chairs in the entrance hall with an Acerbis Creso table, which has an opulent gold leaf base. The artworks are purposefully eclectic but stand back from the main space without intruding. There is a piece by emerging Romanian artist Dumitrache Ciprian and another by Susan Kinsella, both sourced from Saatchi Art. When the apartment was sold, the new buyer bought it with everything in it included. 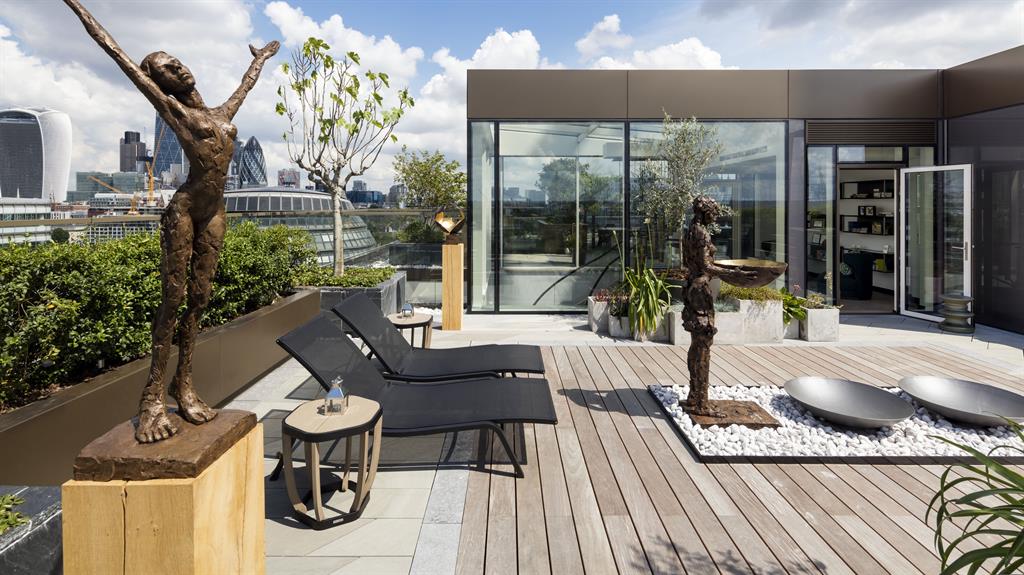 ■ Nearly 6,700sq ft of exterior balcony and terrace space that takes in almost every London landmark.

■ External sculpture garden with works handpicked by designer Thomas Griem from a collection by Carol Peace.

■ Interior and exterior designed by TG Studio under the guidance of Thomas.

■ Filled with artworks by emerging artists, courtesy of Saatchi Art.

■ Outdoor kitchen with dining area for 12.