‘I wanted to create my own country club. I wanted it to look like a nice Georgian manor house with Portland stone, balconies at the front and back and a lot of glass and light,’ he says. 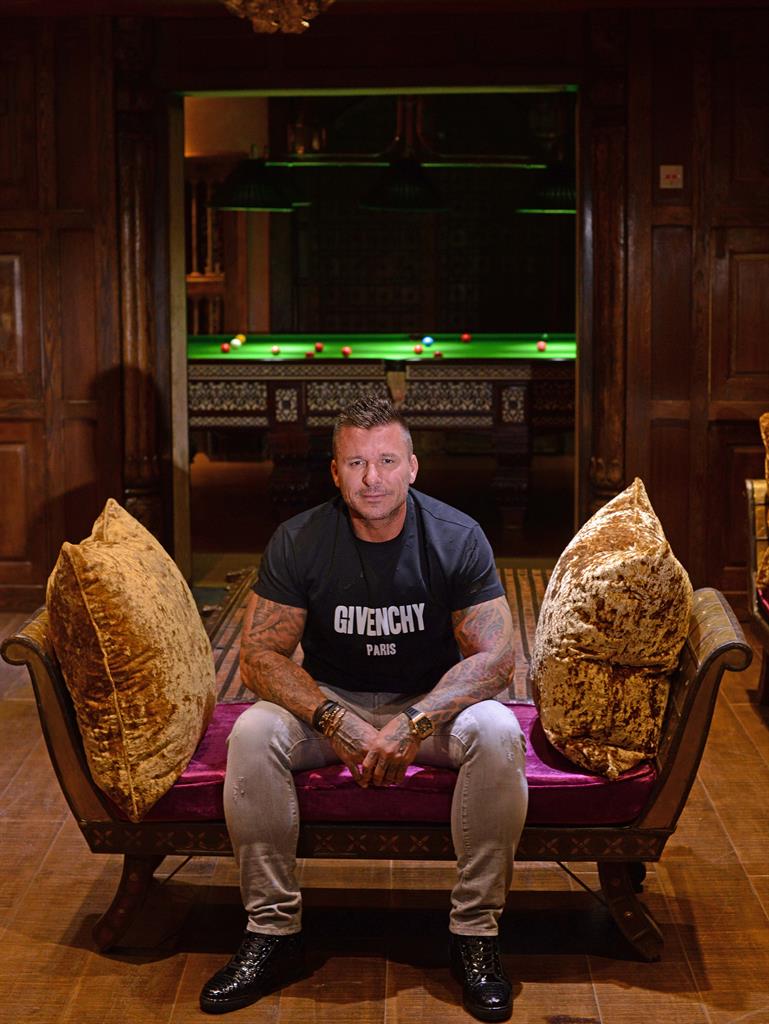 The entertainment elements of Glenn’s house are located in the basement — a bar with billiard and snooker tables, sauna, changing rooms, fully equipped gym and indoor swimming pool.

Glenn’s vision has become a reality but it wasn’t a straightforward journey getting here. He bought the original property that stood on the grounds back in 2005, an eight-bedroom, 1960s-built, mock Tudor house, but found it didn’t live up to expectations.

‘It was the best house in the local area,’ he says ‘But after six months I realised it looked better from the outside than it actually was on the inside. It was very wide but narrow.’

So Glenn, who earned his fortune in the construction and steel industries, set about demolishing the place one Saturday morning. ‘I got in a bulldozer and drove through the house,’ he says. ‘It wasn’t an emotional feeling because I couldn’t wait to put something better there. Then my builders came in on Monday and it was gone by Wednesday.’ Though he had extracted his possessions first, he hadn’t thought everything through. ‘It was very stupid of me but I didn’t understand the rules about planning permission. We had permission for new extensions so I didn’t think it would matter if we put up extensions or did a new-build.’

After the council pointed out his mistake, permission for Glenn’s new house was approved. But even as the build was nearing completion things didn’t go smoothly. ‘Someone came along and stole all the lead from the roof,’ says Glenn. ‘That created a lot of damage — the top of the house had to be replaced. It was a big setback.’ The house was completed and decorated four years ago, but renovations are once again underway. Glenn’s wife Bliss, who he married in 2015, has set about remodelling the top floor.

The original three-bedroom layout is now in the process of becoming a 3,000sq ft open-plan suite with bedroom, bathroom, dressing room and lounge areas. She is also overhauling some of Glenn’s original décor choices. ‘There was a lot of leather panelling and studding on the walls. The flooring in the bedroom was leather. The front room was black and harsh. My wife’s making it a bit softer. I went very Essex-y but that’s gone. Less is more now — other than the dining room.’

The dining room, which is furnished with striking high-backed chairs, is one of Glenn’s favourite rooms — the other being the gym. He does a 90-minute workout each morning with a trainer, and credits exercise with helping him recover from ‘burnout’ he suffered from a few years ago — brought on by building the house and expanding his business. ‘The gym helps me get rid of stress,’ he says.

Glenn lives with wife Bliss, their young son, and his children from his previous relationship — so he’s keen on his dining room, because he and his family use it each evening to discuss their day. ‘I’m a born-again Christian and we sit in there every night and talk about how we could have been better that day — what we could have done that’s been wrong and right. So it’s important for that — as well as eating.’

While his dream house might be a reality, Glenn’s plans don’t stop there. As well as his mission to change the face of non-league football with his recent investment in Billericay Town, he isn’t finished with property.

‘I’ve bought 26 acres of land next door,’ he says. ‘I haven’t fulfilled what I built this house for — which is a place for my kids to enjoy their lives, have happy memories and get married in. I want to build a house next door for each of them. The most important thing about this place is it isn’t a show house — it’s a family home.’

■ For more information about Billericay Town FC and membership go to billericaytownfc.co.uk