SACHA LORD should be way out of his comfort zone right now. As the founder of seminal Manchester club night The Warehouse Project and Parklife, the UK’s largest metropolitan festival, the 47-year-old’s natural habitat is thudding Detroit techno and rubbing shoulders with the likes of Snoop Dogg, Liam Gallagher and Skepta.

But today all is quiet apart from the murmurations of starlings and jackdaws — and the odd yap from his Dachshund named Pickle. Out here in the Cheshire countryside, near Altrincham, is Sacha’s home, a converted barn cocooned in the sound of silence and yellowing leaves of 17th-century oak trees.

Sacha (pictured) snapped up the half-finished property to turn it into the perfect forever home away from the hubbub of inner city Manchester. 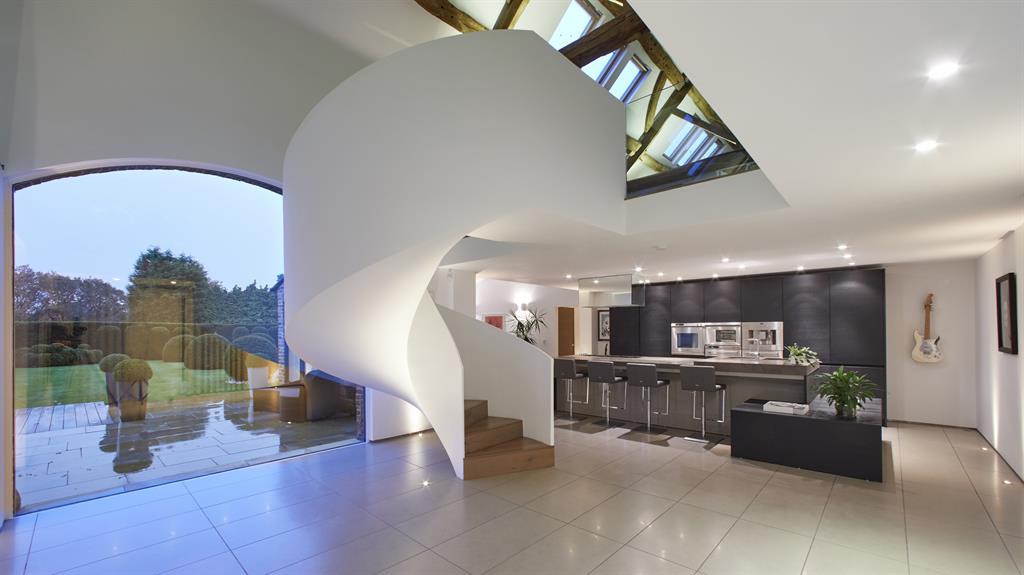 ‘I’ve never been a city dweller because I work in the centre and it’s nice to have the anonymity,’ he says in a far calmer and softly spoken tone than you would expect for someone who spent their adult life running raucous club nights. ‘Look out of the windows and you have fields and fields of horses. You have the River Bollin. It’s nice when leaving the venue and nine hours of techno and suddenly you have this tranquility.’

Sacha grew up in Altrincham and left Manchester Grammar School with two Us and an E at A-level.

Two decades later, he is night-time economy adviser, working directly with Andy Burnham, Mayor of Greater Manchester, to ensure people on a night out can have a safe and enjoyable time. This includes plans to improve safety and night-time transport links.

The house — with a 6ft-high Buddha in the garden that his mum bought him from the internet — is Sacha’s refuge, somewhere he can come home to at 9am after a night in Mayfield Depot, the abandoned train station within spitting distance of Piccadilly, the sounds of Carl Craig still ringing in his ears.

‘Having parties is like a busman’s holiday. I like to just relax and disconnect from the world. I do yoga in the house and it’s just zen. When I moved in I thought I would hold loads of parties so spent £14,000 on a hot tub. I would advise no one to buy one. You use it twice and that’s it.

‘It looks nice but save the money and buy an ornament.’

Sacha’s previous property was a large cottage but he decided to upscale, and spent two years searching for the perfect, forever home.

When he found this converted, Grade II-listed, 450-year-old barn, he knew it was the one for him.

‘The first thing was to keep cool, to keep calm and say, “It’s alright.” But I got in the car and I was fist bumping,’ he recalls.

The property — which taxi drivers have told him was once a cattery — had been given a contemporary feel. The oversized spiral staircase was already completed, but the walls were painted in different colours and the electrics, plumbing and decorating were barely 60 per cent finished.

Sacha calls it an ‘upside down house’ because most of the bedrooms are downstairs but the living area, which is packed with artworks and memorabilia, and master bedroom are on a mezzanine that floats above.

Sacha likes to be busy but admits moving in was stressful. With the 2013 Warehouse Project season beginning just a few days later he decided to move into the property as soon as possible. 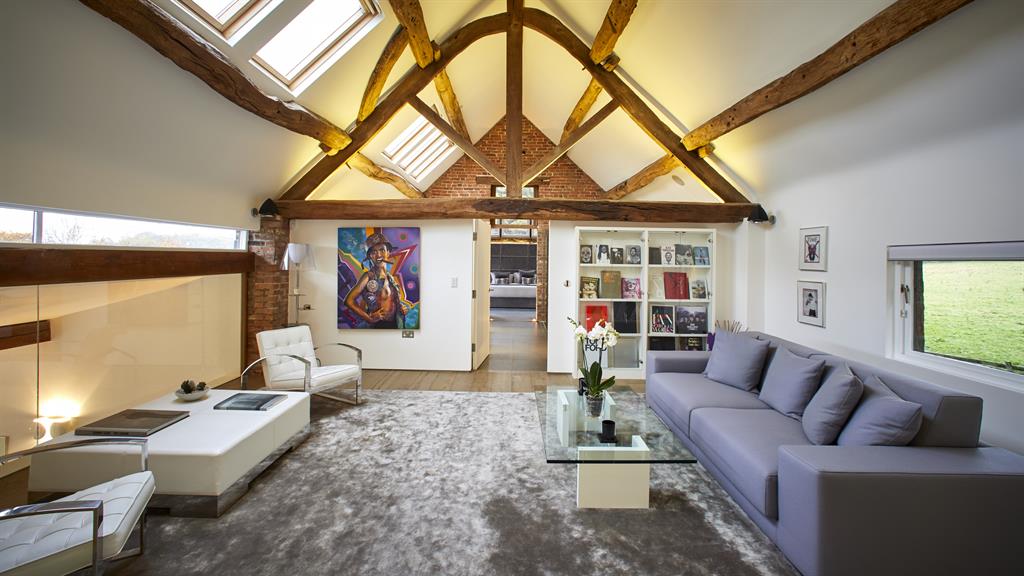 ‘It wasn’t good timing,’ he laughs. ‘Not only was I buying a house and moving out, I was also starting The Warehouse Project season. It’s always late nights so I thought I’m used to it. I’d be finishing work at 5am and the builders were turning up at 6am, then creeping around while I was trying to get some shut eye.’

The property channels a Boston or New York art gallery feel. The staircase stands like a giant sculpture in a gaping space. The kitchen is immaculate — almost too immaculate — crafted from granite from Venice. ‘Between 2013 and September 2017 I could probably say I hadn’t used any of the appliances at all,’ says Sacha, who is a big fan of Manchester’s restaurant scene.

‘I used to use a B&Q microwave at the end of the kitchen. There is a Waitrose nearby.’ 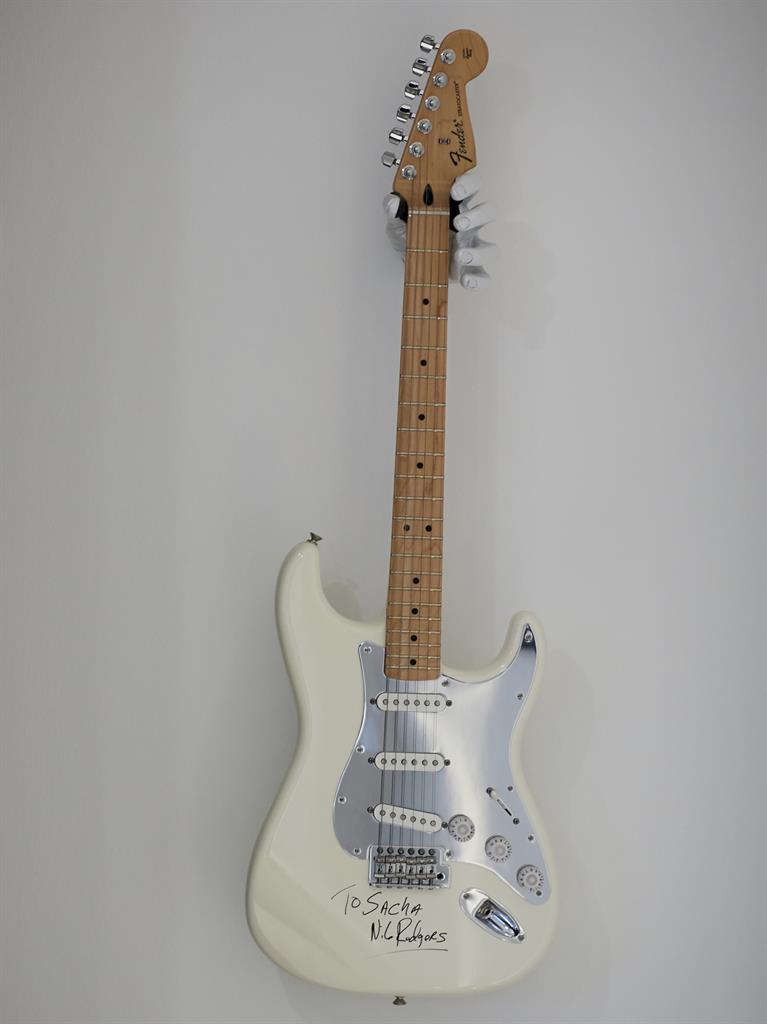 The kitchen, like much of the house, is decorated almost solely by memorabilia — in this case a guitar signed by funk legend Nile Rogers.

In the private living room of the master bedroom is a cabinet filled with books, including treasured copies signed by David Bowie, Mick Jagger and Blondie.

On this level are two huge, handmade silk rugs from India which took 12 weeks to make by hand. ‘They weren’t cheap,’ says Sacha. ‘They were also grey, but when the dog arrived 12 months ago he started p*****g on these rugs.

‘I had a debate with the household insurance company and 12 weeks later two replacements arrived. Pickle walks straight in and p****s all over them. This time I scooped him up really quickly and saved them.’

The clean lines of the house are also punctuated with artworks by the likes of Bambi, Tracey Emin and Damien Hirst.

There is also a portrait of former Italian Prime Minister Silvio Berlusconi called Bunga Bunga, by Jonathan Yeo, which is made using pornographic images.

‘The cleaner is mortified,’ says Sacha. ‘It has never been the same between us since.’

The home’s style, Sacha says, is contemporary. ‘I like clean walls. I don’t like putting art on the wall if it doesn’t feel right. I have artworks on the office floor because I don’t want them on walls.’

The office houses a treasure trove of memories, with a billboard from the Manchester Evening News celebrating the success of Parklife and bunches of VIP lanyards from events. ‘I love collecting memorabilia from my events over the years,’ he adds. ‘Each one tells a story, good or bad. When I shut the doors, I just like to lose myself in my memories. I wonder what they will do with them when I’m dead. A brick from The Hacienda will mean nothing to anyone really.’