LOOKING at it today, you’d never guess as to the goings on inside this refined cottage nestled in the west country. In the late 1700s, the house, now aptly named The Brandy Thief, operated as a look-out post to alert the notorious local smuggler Hannibal Richards to potential danger.

Since Hannibal’s day, though, it’s had many incarnations, including a museum and, latterly, a tearoom. These days, it’s a three-bed holiday home to Tina Bunbury, her husband Tim and their children. Sitting on the South West Coast Path, surrounded by gorse-covered moorland and with magnificent views over the turbulent North Devon seas, it’s easy to see the appeal.

‘The Brandy Thief was just the ideal location, with arguably the best views in Lee Bay — full of history and charm and with lots of potential to create a stunning family home,’ says Tina. 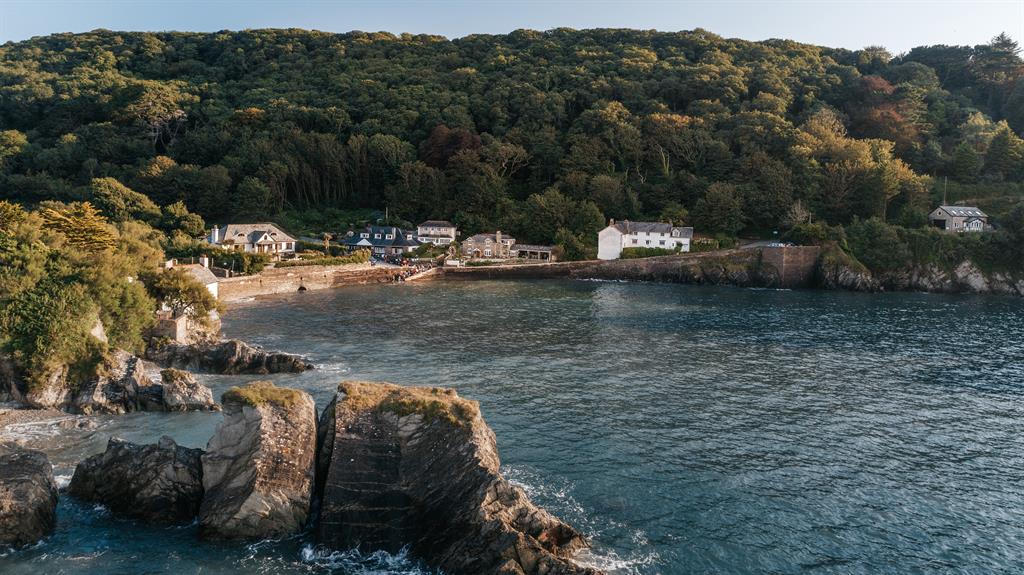 ‘I knew it was a once-in-a-lifetime kind of place and persuaded Tim we should go for it on the basis that it needed no work and was ready to move in to.

‘Of course, as you would expect, we spent six months stripping it back, reconfiguring the space and undertaking major works.’

Over the years, the property had seen a number of quick renovations which meant that, while it was, indeed, habitable, some of its soul had been removed along the way. 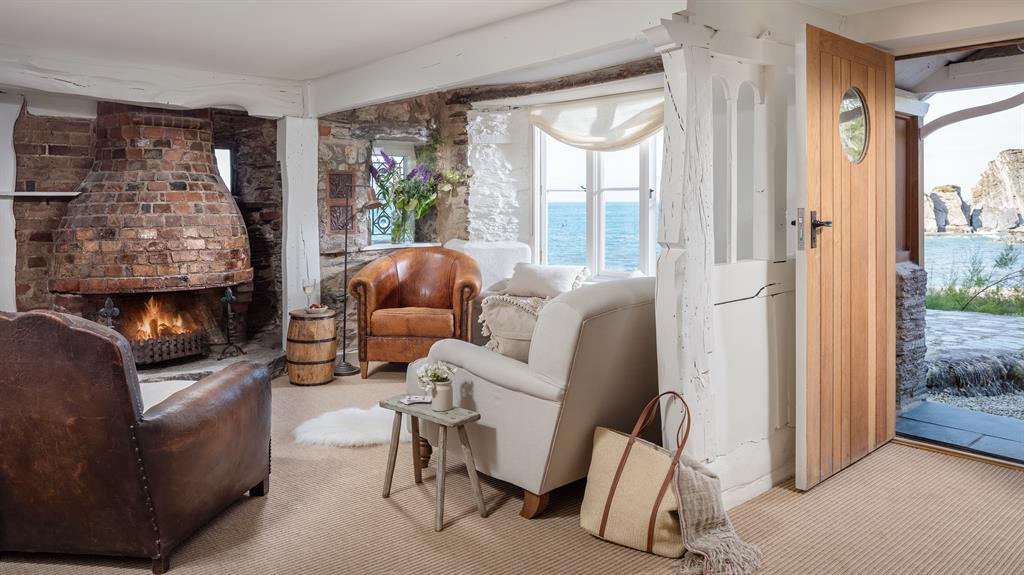 There were two recently-installed modern bathrooms and a cheap laminate floor in parts of the downstairs. But what couldn’t be taken away was the view from every room, with the crashing waves of Lee Bay and the surrounding area, also known as Fuchsia Valley with much of the village hedgerows ablaze with the scarlet flowers during the flowering season.

‘I sent [a photo] to a couple of my friends saying we had ditched our holiday to Devon and had jetted off to Greece instead — it was such a glorious day, they believed me,’ says Tina.

‘The day we picked up the keys, I simply sat at the window with a cup of tea, watching the sea. The covered range outside, and all the additional space this provides, makes the cottage feel really spacious and it is great for entertaining.’

Seeking some respite from the hectic everyday, Tina and Tim wanted to create a seaside sanctuary for themselves, with strong roots to its history, intertwined with a thoroughly modern feel.

To that end, they sacrificed a fourth bedroom, which was very small so the couple decided to knock it through to create a larger, more luxurious bathroom with a freestanding vintage bath and separate walk-in shower.

‘It’s quite a surprise in such an old cottage where you would expect the most pokey bathroom imaginable to exist instead,’ says Tina.

The modern central heating was updated to new cast-iron radiators with the addition of underfloor heating in the kitchen and bathrooms. Original floorboards were uncovered and natural stone laid in place of the modern laminate floor. A local artisan Venetian plasterer created a bespoke and seamless finish in the main bathroom to showcase the amazing vintage bath. Once the structural work was completed, Tina worked with a designer to develop a relaxed and elegant scheme.

‘While we wanted a subtle reference to its heritage by the sea, we wanted to avoid the nautical look and anything too strong. The colours and textures were all meant to be subtle, yet comfortable and warming — just like the brandy the local smugglers were reported to deal in nearby.’

The biggest challenge, however, wasn’t what they took out or knocked through — it was getting furniture and fittings into the cottage.

‘None of the newly-acquired, vintage furniture could fit up the stairs,’ says Tina. ‘So we had to take out the bedroom window and erect scaffolding in order to get it all physically in the cottage. Getting the humungous bath upstairs was touch and go.’

There are now conversation-starting vintage pieces everywhere. A set of beautiful, old-school, wooden lockers were sourced from a local antique shop and a gnarly smugglers’ chest sits in the living room.

A ship’s pulley is mounted on a stand as a simple yet striking link to the sea outside. There is also a collection of original postcards of The Brandy Thief from when the cottage was a museum, antiques shop and tearoom, along with some original souvenir leaflets. 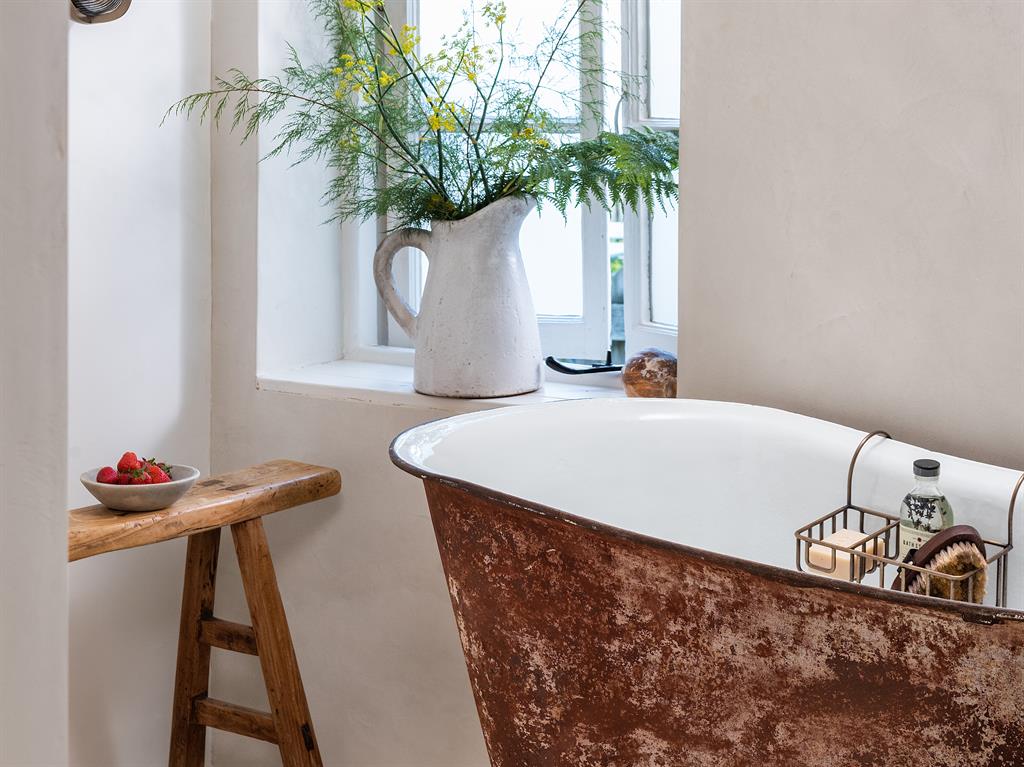 The couple have tried to retain as much original stonework on the interior as possible. This is complemented by warm, white tones throughout, which contrast beautifully with the blue of the sea when you look outside. Tina says: ‘We were aiming for a pale yet interesting colour palette with warm, metal colours and antique leathers, offset by natural cool linens and warm sheepskins — all in natural hues.

‘Everything was about framing and accentuating the amazing views. We coupled this with more unusual textures, such as the polished plaster in the bathroom and also the kitchen work surfaces, which worked well with the more rustic nature of the original floorboards and stone floors.’

The coastal environment caused its own problems, too.

‘Being so close to the sea meant that there was a constant battle with humidity and damp when we were painting.’

Pretty much every stage of the project and every room sure had its range of challenges. But with all these hurdles successfully cleared, the overall result is exactly as they planned — a cosy retreat that celebrates its past.

‘It has been stressful,’ admits Tina, ‘but it is definitely a labour of love.’

■ The Brandy Thief is available to be rented out via Unique Homestays, uniquehomestays.com