WITH their lofty vaulted ceilings, glorious stained glass windows and exquisite stone exteriors, former chapels have a unique appeal. But transforming these heavenly buildings into a domestic haven can be a devilishly daunting task.

When interior designer Peggy Prendeville bought The Chapel in Gabriel’s Manor, Camberwell, south London, in 1999, she had a better skill set than most.

In a career spanning three decades, she has created interior designs for everything from grand hotels and London mews houses to a library in an 18th-century ballroom for Sotheby’s. And back in 1998 she was added to the International Who’s Who of Professionals.

She loves the ‘magic of a bare shell that provides a blank canvas with which to work’ but even she was challenged by this 3,325sq ft former house of God.

‘It had been deconsecrated and partly converted the year before I bought it, but it was rather a jumble,’ she says. ‘Putting it back together and working out how to create a cosy home in this vast space took all my energy.

‘At one point the buildings, including the chapel, which had originally been built as a ladies’ training college around 1908, were used by Goldsmith’s College. Damien Hirst studied here. But there had been some damage to the interiors. It took me more than two years and was a bit like working with a giant jigsaw puzzle.’ 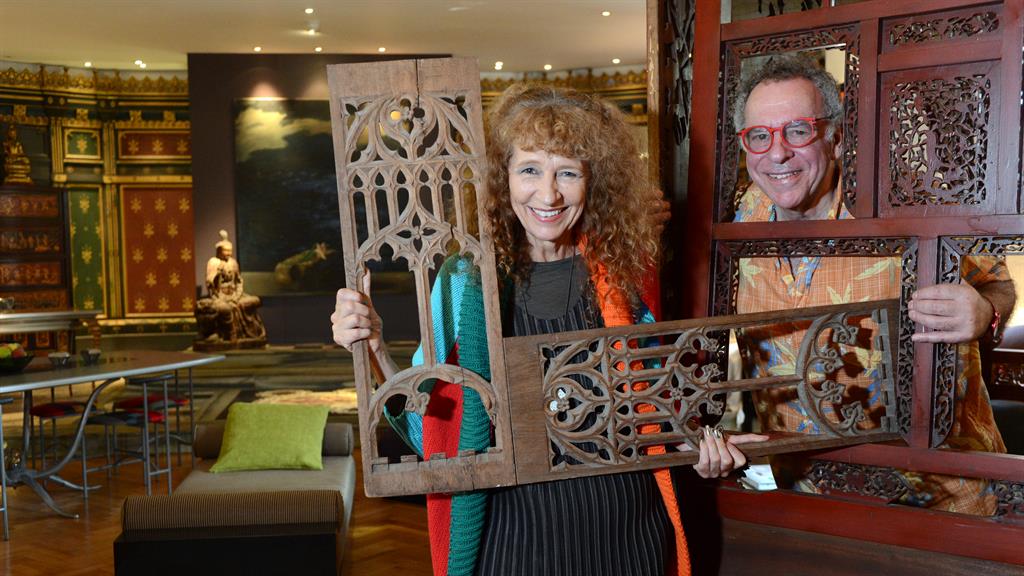 Fast forward 20 years and her dedication has resulted in an astonishing blend of historical restoration and contemporary living. Every wall panel in this property opens to reveal storage and one of the five bedrooms even has a ‘secret’ bathroom.

The grand entrance at the side of the Grade II-listed stone chapel opens to a circular staircase; there are polished plaster walls, zany rainbow-coloured carpets and a dramatic drop pendant light.

Inside the home itself, the walls are lined with modern maple paneling, while a historic wooden panel near the front door boasts the names, in gilt, of all the former principals of the Ladies’ College.

Peggy has married these poignant pieces of history with her own utterly modern design. The corridor winding through to the heart of the chapel passes on one side a double bedroom (with the secret bathroom) and on the other a glass-walled office she uses as her studio.

The heart of the home is the former chapel itself, with dark stained, oak paneling, pitched pine parquet floors, original reredos panelling in burgundy and green and six ancient wooden seats (part of the original chapel) which sit sternly poised at the back of the room, as if ready to seat the kings and queens of Narnia. 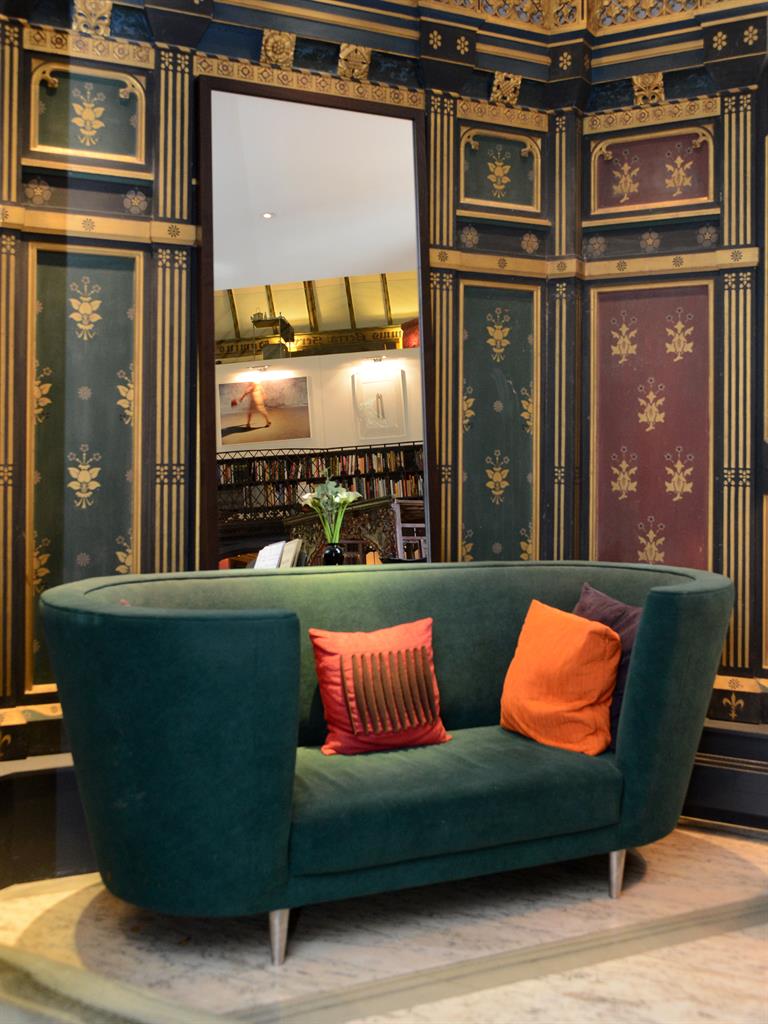 There’s an early 20th century Chinese wedding bed, carved with birds in reds and vibrant golds, that she bought during her time working in Singapore; an ‘alligator desk’; and an octopus dining table, with its twisted aluminium legs by designer Mark Brazier-Jones. She’s filled this huge space with her own plush and grand sofa designs.

Above the original stained glass windows, which are hinged at the bottom to open and let in more light, is a frieze in Latin, which runs around the base of the vaulted ceiling. It reads: ‘Remember your Creator in the days of your youth… he that believeth in me, though he were dead, yet shall he live.’

At each end of this cavernous room is a mezzanine. The first, above the former altar, is accessed by hidden stairs and leads to a generous and airy second living room with a glass balustrade.

At the other end there’s a second, two-storey mezzanine, with more hidden storage and quirkily-designed bedrooms with glass panels and doors to allow maximum light. 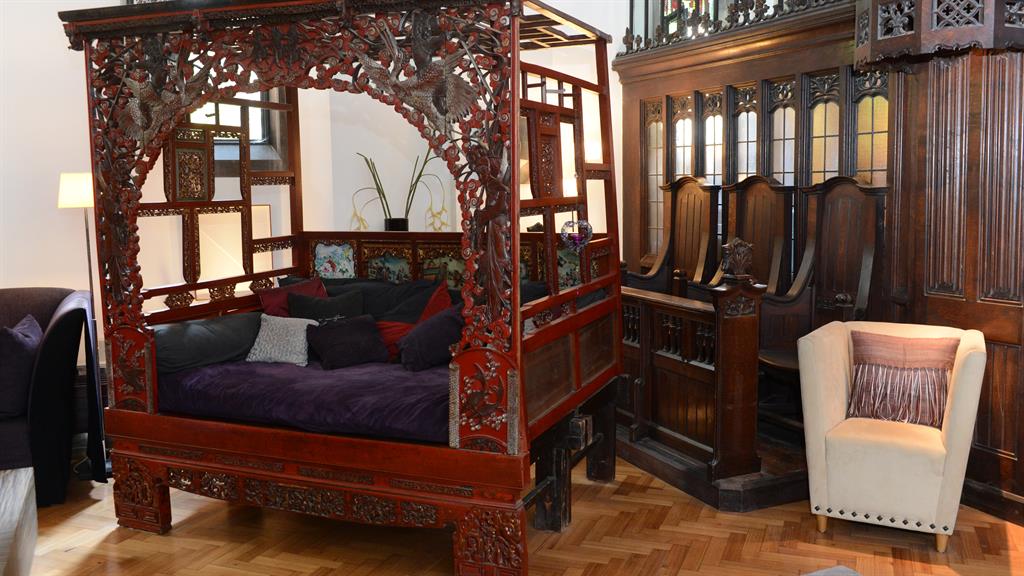 On the top floor here is the stunning master bedroom, complete with a free-standing bath, wrapped by Peggy in faux snakeskin — a garden of Eden reference, perhaps?

From the side of the living room, there’s access to a gated garden, though the property is also just across the road from the leafy Myatt’s Fields Park.

The property is so individual and so eclectic, it’s curious that Peggy is parting with it.

‘I would really like another challenge,’ she explains. ‘I know I’ll never match this property for its ‘wow’ factor or grandeur.

‘It’s very special waking up here and watching the sun stream in through the stained glass windows.

‘But I’ve lived here for 20 years. I’d actually like to move to something really modern.’ 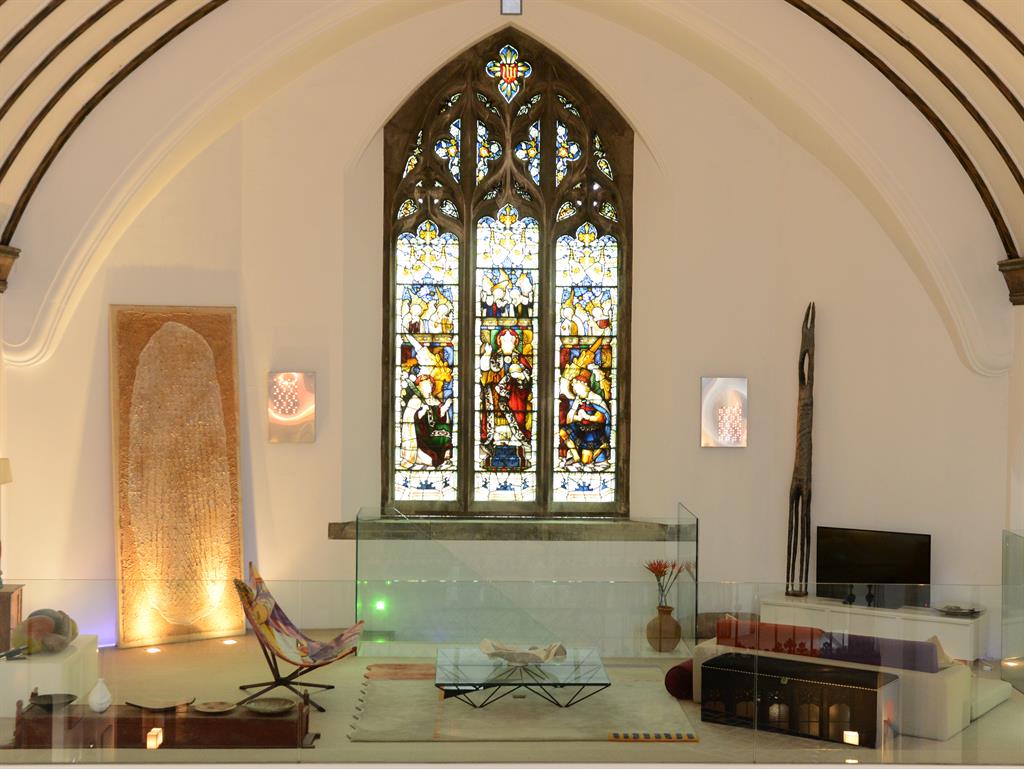 What you get for your money 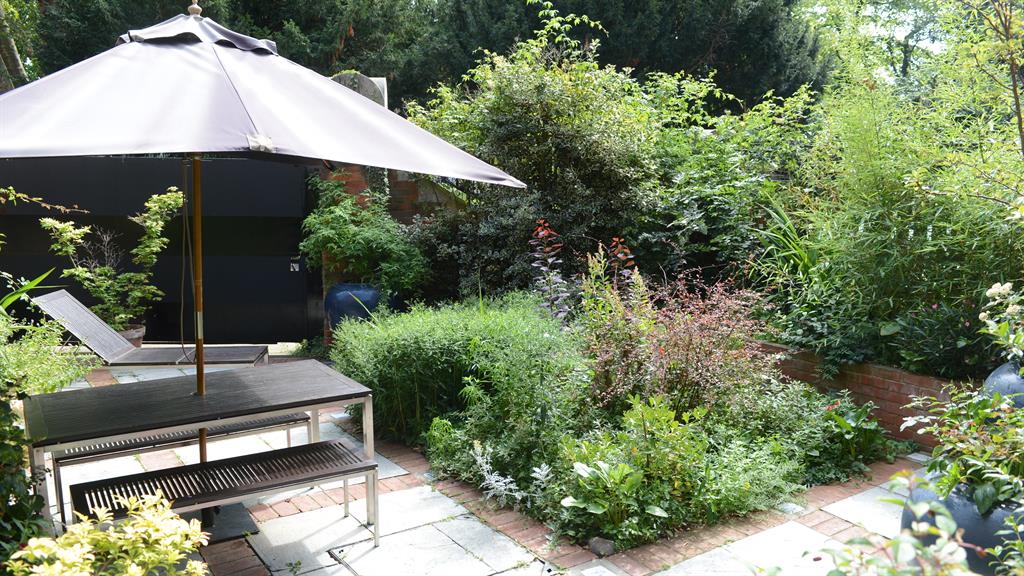 ■ A piece of modern history — when it was used by Goldsmiths College, Damien Hirst studied here