WHEN Lizzie Francis bought this glorious London home from Hollywood set designer Carolyn Scott in 2007, it was a treasure trove of intrigue.

There are still signs of its former resident — three large statues of the Egyptian jackal-headed god Anubis from the set of Elizabeth Taylor’s Antony And Cleopatra are still in situ in the garden; inside there are exquisite wall lights which — having once graced Queen Victoria’s Royal train — Lizzie bought when she purchased the house.

Before Carolyn, the house was owned by Bond girl Honor Blackman, and the designer inherited a family of cats who lived in the basement, giving new meaning to the name Pussy Galore. But when Lizzie took it on, it hadn’t been modernised for decades and was a maze of small rooms, with dozens of doors. Three of these are now mounted on the back wall of the garden ‘rather like William Blake’s Doors Of Perception’, Lizzie says.

‘The house felt like it was a Victorian gentleman’s residence with the “downstairs” for the staff,’ says Lizzie, who had a career in music management before becoming a yoga teacher and a florist.

‘But it had beautiful large windows, was flooded with light, and reminded me of the house I grew up in, in Surrey, which was once the childhood home of architect Edward Lutyens.

‘I felt it was a very creative house and I wanted to restore it to keep its integrity, but give it more flow. It certainly has its own narrative. I’ve found it inspiring.’

Today the 3,391sq ft, five-bedroom property, which is spread over three levels, is testament to her vision.

It took the then single mother two gruelling years to refurbish and there was a major hiccup at the end… more of which later.

With its two separate entrances, quirky niches, exposed brickwork and a wonderful lobby full of plants, not to mention various balconies and patios overlooking the leafy garden, the house doesn’t feel as if it belongs in central London at all. It has more the air of a rural retreat.

A carport is currently home to Lizzie’s florist outlet. On the lower-ground floor, a 30ft x 23ft multi-purpose living area with polished concrete floors, lofty ceilings and a wall of Crittal windows leads directly to the walled garden.

There are some charming surprises: an original amber and muted pink-stained glass window, tucked in one corner; together with a large secluded bedroom and a wet room.

The main entrance to the house is at the front, although Lizzie uses the side entrance. On the raised ground floor the floors are all wide-slabbed, dark-stained oak, there’s an original cast-iron fireplace and a fabulous bespoke Modulnova kitchen with graphite surfaces, a wine fridge and an island perfectly positioned near the large window that overlooks the garden.

The living area is now open-plan but the kitchen leads into a conservatory/dining room with a gabled roof, lined with exquisite Japanese-style wallpaper. There’s also a walk-in larder on this floor, decorated in the lively colours of Mexico — tangy green/turquoise and fuchsia pink — a contrast to the otherwise calm, stone hues. It’s Lizzie’s favourite room.

Up the sweeping staircase, with its original mahogany stair rail, are the bedrooms. Here there are white-painted floorboards, large windows offering views over gardens and the street and the master bedroom with the en suite, now home to Queen Victoria’s carriage lights.

The family bathroom has Moroccan Tadelakt plaster walls, adding an air of the exotic.

Lizzie, a mother of two, is selling because she’s about to get married and move to the country to set up a new business. But the house, it turns out, even played a role in her own romance and forthcoming nuptials.

‘In 2017, when the refurbishment was all finished, I dashed out and left a pot of chicken stock on the stove,’ she says. ‘The house didn’t catch fire, but I came home to the doors wide open and the house full of smoke, which still did a lot of damage. At the same time I’d been encouraged by a girlfriend to try online dating and a few days later I liked the look of a man I’d seen online. 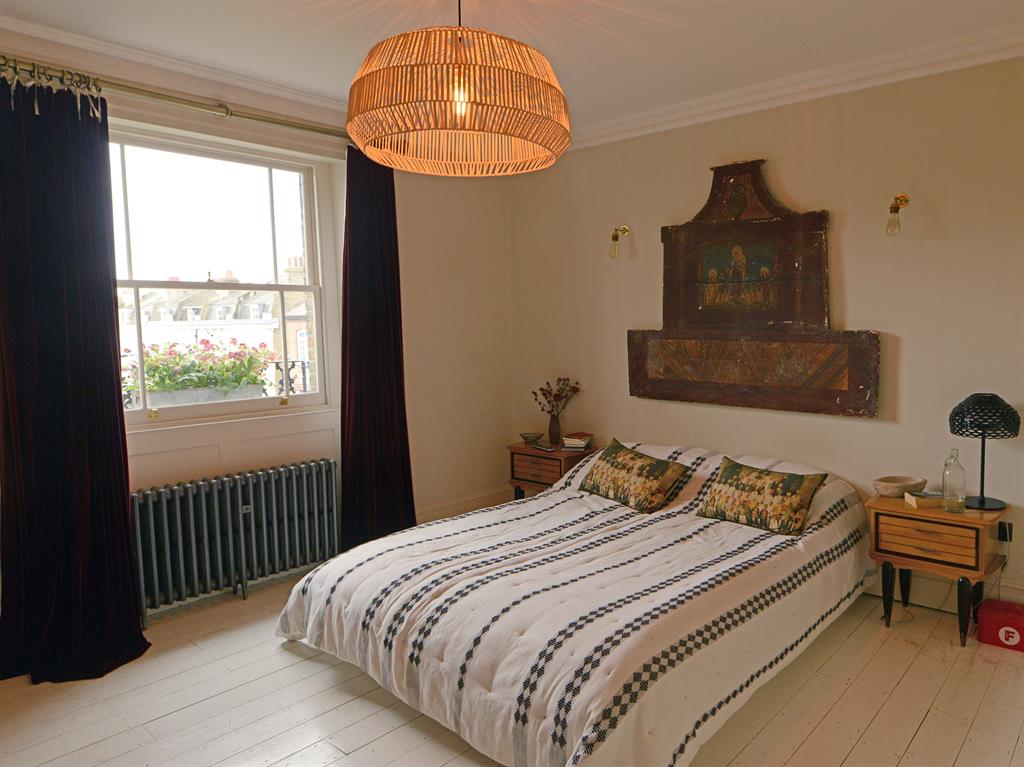 ‘It turned out that he was a firefighter, and he’d attended my house during the chicken stock incident! We decided that was definitely enough of an omen to have a real date. And now we’re getting married.

‘Living here has given me huge joy and satisfaction. And I am proud of what I have done to the house. I feel as though I’ve liberated it. It feels magic again.’

■ Lizzie’s Goldhawk Road property is on the market for £3.65million, finlaybrewer.co.uk