YOU’RE unlikely to have met actor Jonathan Kydd but you’ve almost certainly had him in your living room. The son of British theatre and film star Sam Kydd, he’s done more than 12,000 voice-overs for advertisements and a raft of TV shows and documentaries, and voiced all the characters for the kids’ cartoon series Bangers And Mash. Quite a feat.

Today, I’m in his living room, in the 2,777sq ft Hammersmith house he shares with his partner, the actor Henrietta Bess, and their ten-year-old daughter Georgia. It’s now for sale and he’s showing me around the home that he has reshaped and restored over the past 20 years, with exuberant enthusiasm.

‘It was all rather conservative when I bought it in 1995,’ he says. ‘Many of the rooms were dark. There were weird, Spanish-style arches everywhere. I guess you’d also say the house was a bit tired.’

The first changes he made, as a single man and successful actor (he first appeared on-screen aged six, in the 1962 British comedy The Iron Maiden, alongside his famous father), sound distinctly less appealing than the bright, white-painted, crisp and clean architectural palette I see before me today.

‘I like green and I sort of sponge-mopped many of the walls in green,’ Jonathan recalls. ‘I also had a lot of avocado plants, though none of them ever bore fruit. I guess the living room looked a bit like a jungle. I really liked it.’

However, when Henrietta moved in a decade ago, she didn’t like it (I’m with her on this one). ‘She insisted I get rid of the ‘jungle’ and the avocado plants,’ he says, a tad wistfully. ‘Actually, I do prefer it like this.’

The house, built in 1880, is now an appealing and warm family home. Jonathan has removed a wall in the ground-floor hall to create a spacious, open and airy living room, with a generous bay window, a gorgeous marble-surround fireplace, and original and restored floorboards. There are wall-to-wall shelves containing books and a sizeable record collection. Jonathan admits to ‘saving’ most things and still has the first book he was given, aged three — Noddy, since you ask. And yes, he has done a voice for him, too, for Channel 5 kids’ segment Milkshake!

He extended the ground floor of the house towards the back, to create a spacious dining and living area, with bi-fold doors leading straight into the lush and leafy garden. Then he added a side-return with a pitched glass roof over what is now the kitchen. The drawers and cabinets here are a rich, almost-black blue hue, offsetting the warmth of the wooden worktops. 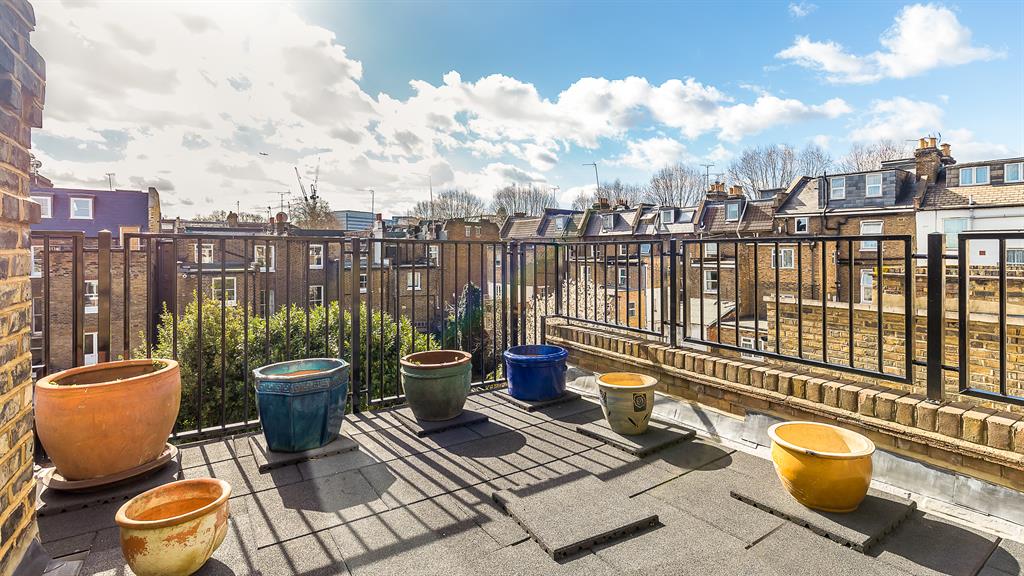 The walls throughout the house are now gleaming white and act as a gallery to Jonathan’s collection of paintings and photographs — pictures of him with his dad (Jonathan is currently re-working Sam’s unpublished autobiography), family shots of Georgia, and Henrietta, and, on another wall, innumerable posters of all the shows in which he has starred.

Upstairs on the half landing there’s an appealing study, with a small, original fireplace and French doors leading to an outdoor terrace, while further upstairs are four large bedrooms, including a loft which Jonathan had refurbished as an office, though it’s now too small for his work — which is one of the reasons Jonathan is reluctantly selling.

The en-suite bathroom in the master bedroom is huge — the giant tub is big enough to house a family of koi carp. There are built-in wardrobes and storage everywhere, but Jonathan and his family need more space.

For Jonathan’s work — and his work equipment — continues to expand. He now makes videos while continuing to do voice-overs for corporate videos and games. Once the voice for L’Oréal adverts, he is now a regular voice for Film4 and many wildlife documentaries.

Which brings to mind a question: if this large and lovely home were able to speak, what voice would it have? ‘Well my favourite character is Mrs Snitchnose, the witch from Bangers And Mash — she’s like a commanding 1940s actress, maybe Edith Evans,’ he says.

‘But the house? Well, it’s been a few people, hasn’t it, over the time since it’s been built? People say it’s rather bohemian but I still imagine an Edwardian gentleman with highly polished shoes walking up the stairs. And I’m really not sure what he’d sound like.’

■ Jonathan’s house is on the market for £2.575million, finlaybrewer.co.uk