WHEN Ernő Goldfinger built Balfron Tower in east London in 1967, he encapsulated the post-war theme of creating residential ‘streets in the sky’. But, unlike many other high-rise blocks of the era which have long-since crumbled, Goldfinger’s vision has stood the test of time.

Today, the 25-storey block is undergoing a two-year redevelopment by Londonewcastle and award-winning architects Studio Egret West (SEW) and Ab Rogers Design (ARD), to adapt the 146 apartments for a more modern way of living.

The scheme is due to be completed in summer next year.

Made of cast and poured concrete, Balfron Tower still dominates the urban landscape of the Brownfield Estate in Poplar, and is now a Grade II*-listed brutalist landmark. ‘The greatest challenge was to make the apartments relevant to today’s living without losing the integrity of Goldfinger’s designs,’ says Ab Rogers, of ARD.

‘But changes in building regulations gave us more freedom than he had in how we could liberate space and add style.’

The lofty nine-storey service tower, once filled with utilities and boiler rooms, has been re-invented so that each floor has a recreational function: including cooking, yoga, table-tennis, music, a library, a gym and a cinema. 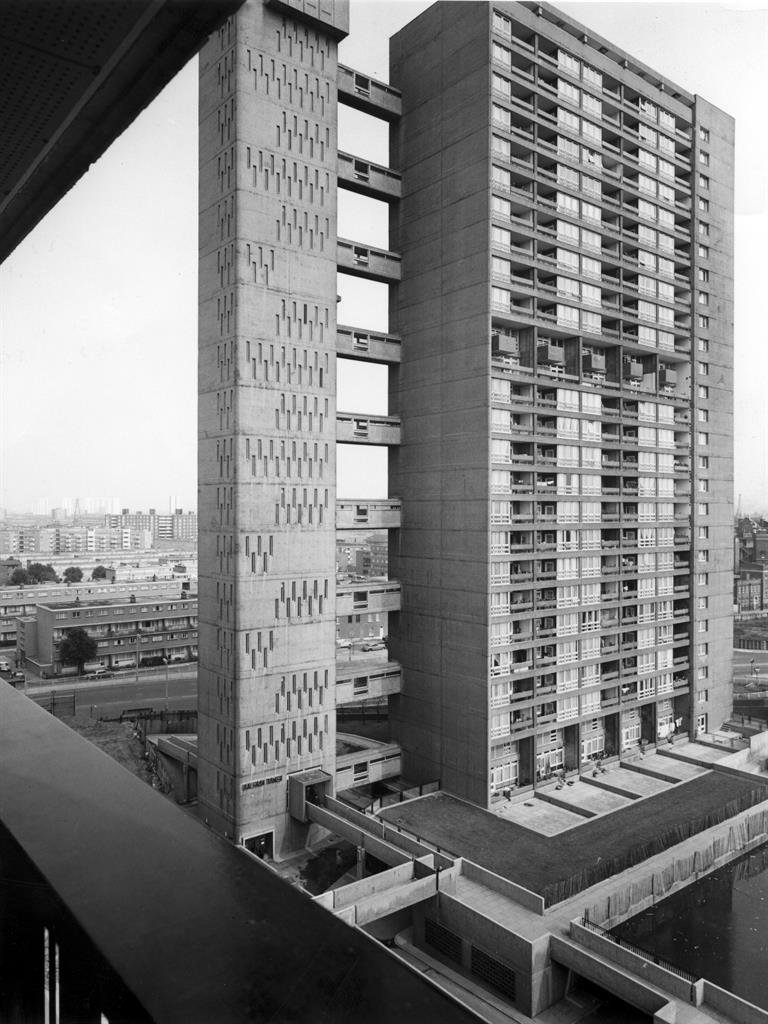 A new rooftop garden will provide hydroponic growing towers where residents can produce edible plants, and there is holistically designed circular seating. At ground level the landscaping will provide gardens with a public square at its heart.

In keeping with the modern desire for a greener existence, the subterranean car park has been redesigned to create plenty of room for bikes, rather than just cars.

There are 12 landings and each is clad in its own historically hued tile. The tiles are recreated to mimic the originals and are made by the same company, Johnson Tiles. Goldfinger graded the colours of each landing to become darker the nearer you got to the sun. On the ground floor the tiles are white; by the time you reach the top floor they are midnight blue. There are a raft of different, vibrant colours in between. 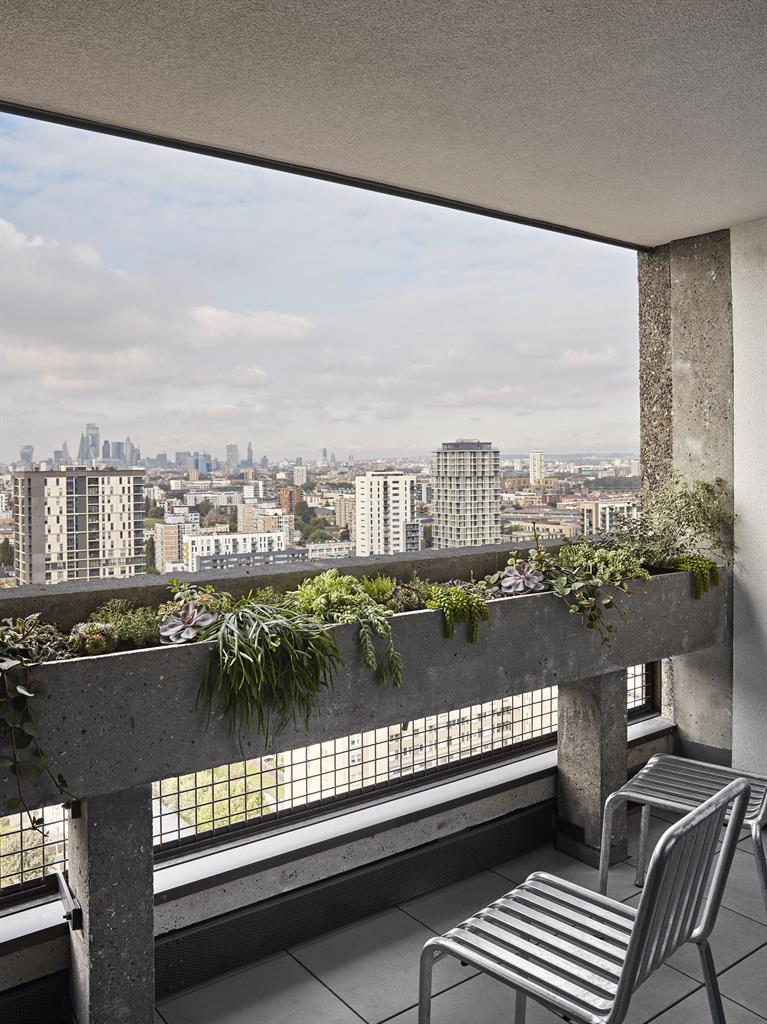 Inside, the one, two, three and four-bedroom apartments are accessed by a set of concrete corridors or galleries — with triple-glazed windows, rather like the arrow slits in a castle. They run from the lifts in the tower and have been re-clad in polished concrete, stainless steel and birch plywood.

Goldfinger and his wife, Ursula, famously lived in the tower themselves for three months, in apartment 130 — which will be one of six ‘heritage’ flats where the internal layout remains unaltered. But the remaining 140 have been redesigned to have open-plan living areas. Floor-to-ceiling Crittall windows mean each apartment is light and airy and offers expansive views across London. The large, enclosed balconies, with listed concrete planters — part of Goldfinger’s original design — function as an additional summer room.

The ARD approach is sharp and crisp, with shelving and cabinetry in the kitchen, Corian worktops, Marmoleum flooring and, in some apartments, a high-level breakfast bar-style island. Oversized bathroom tiles are twinned with bold ceiling stoneware. In the living room, fitted metal lamps and bespoke side tables have been made by the Goldfinger Factory — established in 2013 to make bespoke furniture based upon the architect’s principles.

Interior architecture is by SEW and ARD and interior design by 2LG Studio. In the two-bedroom show flat I visited, you walk downstairs from the front door, past walls lined with gleaming silver wallpaper. The living room furniture is spartan, yet stylish.

The kitchen has a terrazzo splashback and the bedrooms are decked out in pastel velvet. It all feels gloriously Clockwork Orange, though with modern touches like heated towel rails and underfloor heating.

So what would Ernő Goldfinger think of the makeover? 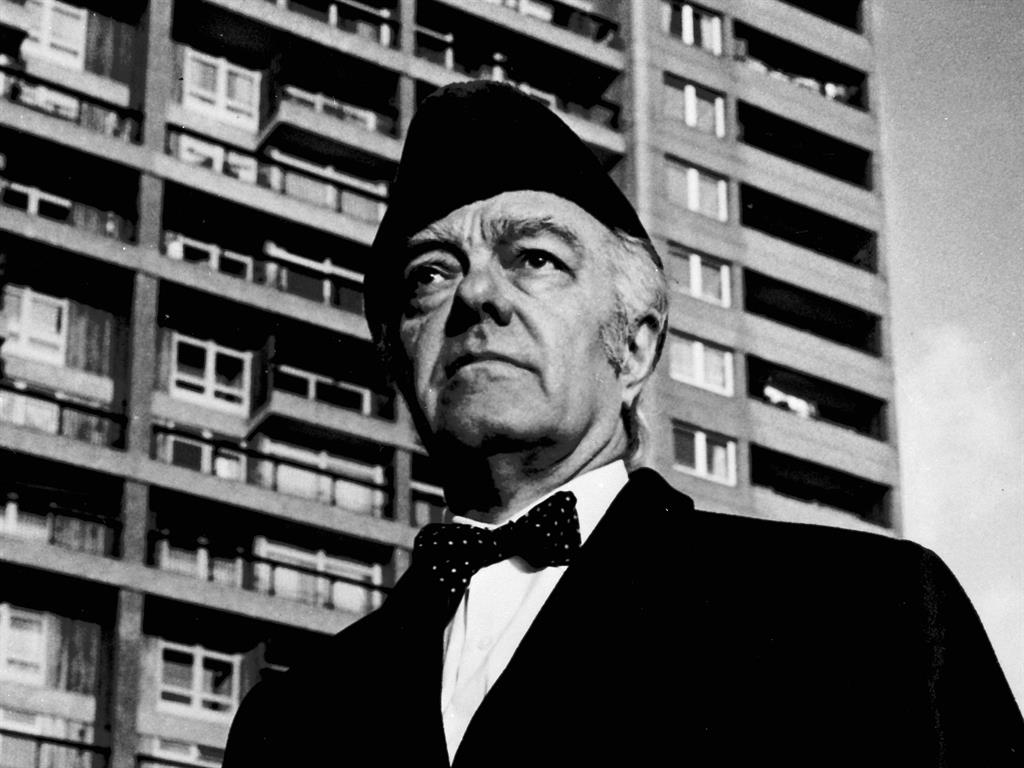 The architect, whose other famous creations include the brutalist Trellick Tower in west London, was notoriously humourless. Indeed, he took legal action when James Bond author Ian Fleming borrowed his name and gave it to his most famous arch-villain. Goldfinger’s plans to build his own home in Willow Road, Hampstead, had originally drawn the author’s ire, as it meant knocking down some cottages.

But Ab believes he might well give his tacit approval to the project. ‘The building still has Goldfinger’s brutalist power, but inside there is a new warmth and a nod to contemporary style,’ he says. ‘I would be happy to show Ernő Goldfinger around, if he was still about.

I am sure he’d have something to say about someone tinkering with this iconic building. But I think he would understand — and maybe even appreciate — what we have done.’

■ Prices for a one-bedroom apartment are from £365,000, balfrontower.com