THE Duke of Sussex has described landmines as the ‘unhealed scar of war’ after emulating his mother Diana by walking through a partially cleared minefield.

Wearing body armour and a protective visor, Harry watched as staff from the landmine clearance charity Halo Trust painstakingly worked to rid a remote area of Angola of military munitions.

The Princess of Wales was famously pictured in a partially cleared minefield in the Angolan town of Huambo in 1997, to highlight the plight of those maimed by the weapons and to urge a worldwide ban.

Harry’s mother never saw her work to help outlaw landmines come to fruition as she died the year of her Africa visit a few months before the international treaty to outlaw the weapons was signed.

In a speech to mark his visit, Harry said: ‘Landmines are an unhealed scar of war. By clearing the landmines, we can help this community find peace, and with peace comes opportunity.’

Speaking about Huambo, Harry said: ‘Once heavily mined, the second city of Angola is now safe.

‘With the right international support, this land around us here can also be like Huambo — a landmine-free, diverse, dynamic and thriving community connected to and benefiting from all that it has to offer.’

An Angolan minister attending the event said the ‘humanistic heritage’ of the princess’s anti-landmine campaign was the catalyst for his country’s final push to remove all the munitions by 2025.

Near the south-eastern town of Dirico the duke walked into an area in the Luengue-Luiana National Park that was once an artillery base for anti-government forces who had mined the position in 2000 before retreating.

The dusty scrubland was marked with red warning signs showing the skull and crossbones, with the Portuguese words ‘Perigo Minas!’ and the English translation below — danger mines.

Jose Antonio, a regional manager for the landmine clearance charity the Halo Trust, took Harry onto the site where his staff have been working since August to make safe, and hope to complete their painstaking clearance by the end of October.

Angola’s landmines are a legacy of a 27-year civil war which ended in 2002 leaving behind an unknown quantity of munitions that have injured and maimed tens of thousands of people. 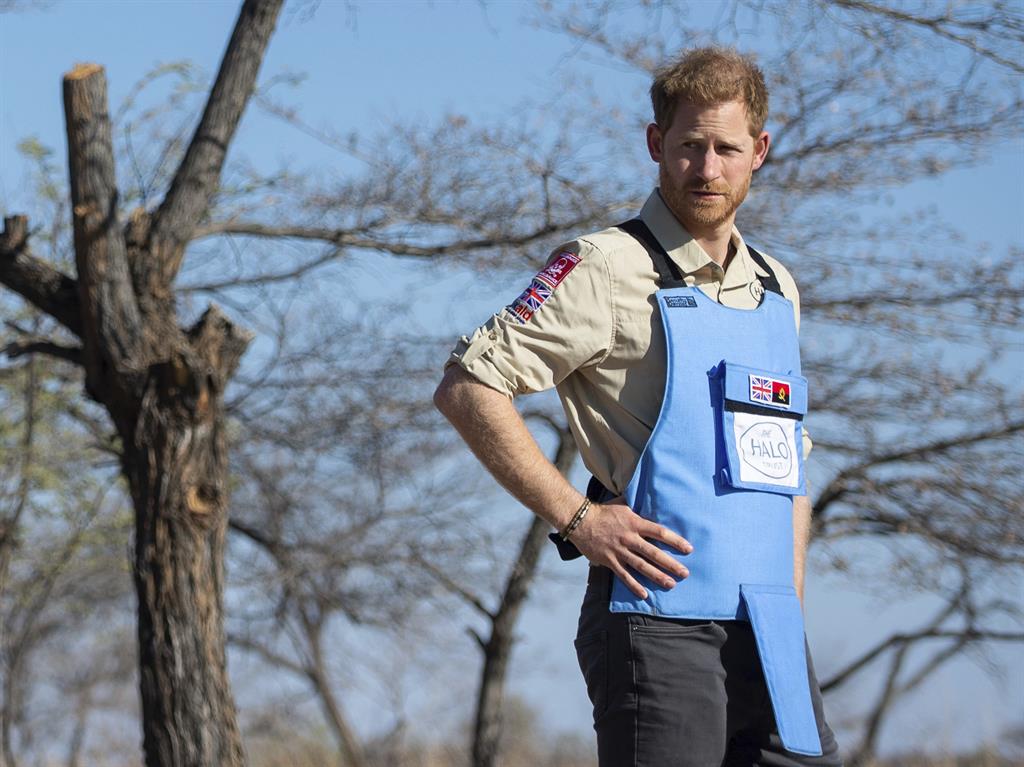 Mr Antonio, said about Harry: ‘He was very interested in the work that my team are doing clearing the mines. He was very impressed; he knows it’s hard and very slow and dangerous, and that you need to be very patient.’

In June the duke gave his backing to a £47million landmine clearing initiative to help destroy thousands of munitions in a huge conservation region of Angola.

The Angolan government is investing the funds in the Halo Trust, which will work over five years to rid 153 minefields of munitions in the south-eastern province of Cuando Cubango inside the Mavinga and Luengue-Luiana National Parks.

The duke walked through an area of the site looking at the marked off areas which potentially could contain landmines.

An anti-personnel mine had been discovered earlier and Harry set it off with a controlled explosion which echoed around the area and sent up a large cloud of dust.

Lucio Goncalves Amaral, deputy minister for social integration, paid tribute to Harry’s mother and said his countrymen and women were forever in her debt.

In a speech the politician told Harry: ”We will never forget her priceless contribution to the campaign to ban the anti-personnel landmines. The Angolan people will be eternally grateful for her performance in the demining process of our territory.’

Speaking about the visit Prince Harry said: ‘It’s been quite emotional retracing my mother’s steps along this street 22 years on and to see the transformation that has taken place, from an unsafe and desolate place into a vibrant community of local businesses and colleges.’