IF ANY Manchester City supporter was not already excited by the impact Ferran Torres has made this season, his midweek exploits will surely have put that right.

Scorer of the first hat-trick against Germany since Michael Owen in 2001, the versatile forward hogged the headlines after Spain’s incredible 6-0 Nations League win in only his seventh game for his country.

The 20-year-old has still to complete 90 minutes in the Premier League since joining City from Valencia for just £21million in the summer but there have been more than enough glimpses of his raw pace and intelligent play — plus goals in the Carabao Cup and Champions League — to suggest that fee could turn out to be an incredible bargain. 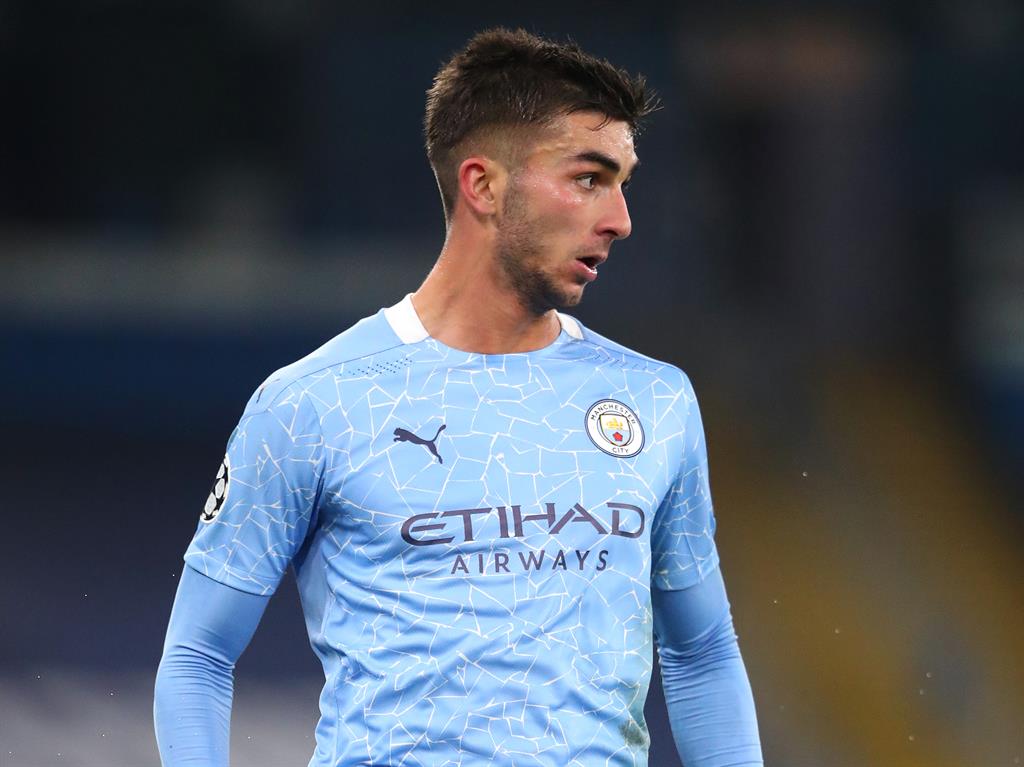 Amid the more high-profile return of Gareth Bale, Tottenham can offer their own candidate for signing of the summer in the shape of Torres’ international team-mate Sergio Reguilon (pictured top). Having set up his country’s late equaliser against Switzerland at the weekend, the 23-year-old full-back missed out on the goalfest against the Germans.

Given the impressive way Reguilon has made the Spurs left-back position his own, with his brilliant ball-carrying skills and his ability to read the game, you can be sure manager Jose Mourinho was not too disappointed to see La Roja boss Luis Enrique give the former Real Madrid man a rest on Tuesday, picking Jose Gaya instead.

Spurs could ill-afford to have lost another full-back, with Matt Doherty ruled out after testing positive for coronavirus. And with Torres most likely to be coming down his flank, Reguilon’s first-hand knowledge could prove crucial tomorrow.

With fellow Premier League big-hitters Liverpool and Leicester going head-to-head the following evening, this feels like a huge game even at this early stage of the season and victory for Spurs would take them top of the table, at least for one night. Much could rest on the face-off between the two outstanding Spanish summer signings.

The sight of Ben Chilwell clearly in pain with a back problem in his first England game for more than a year will not have pleased boss Frank Lampard given the left-back’s fine start to life at Chelsea. Newcastle have an impressive home record against the Blues with five wins in the last seven meetings but you would expect the visitors to dominate the ball and the chances tomorrow.

The lower leagues have long railed against live Saturday 3pm TV games and will want to ensure their return is only for as long as fans are locked out. For the second time, Villa went into the international break off the back of a sublime performance, that 3-0 win at Arsenal, but have suffered back-to-back home losses conceding seven goals in the process. The Seagulls have got just seven all season but have drawn three of their last four games.

■ 12 — Goalless draws for Brighton since winning promotion in 2017

Not for the first time in his United reign Ole Gunnar Solskjaer got a good result just when he needed it but they are still a lowly 14th despite that 3-1 win at Everton. Marcus Rashford’s shoulder problem could mean a first Premier League start for Edinson Cavani. West Brom are seeking their first win since being promoted and should have Matheus Pereira, Branislav Ivanovic and Callum Robinson available again after positive Covid tests.

A victory for right over wrong during a pandemic. Wrong — charge fans for £14.95 to watch games in a tough time for everyone. Right — make sure at least some are on terrestrial TV and maybe even give the Premier League a new audience. This is a big chance for Everton to recapture their early form after three straight defeats but Scott Parker’s side are no longer the pushovers they seemed when the season began. 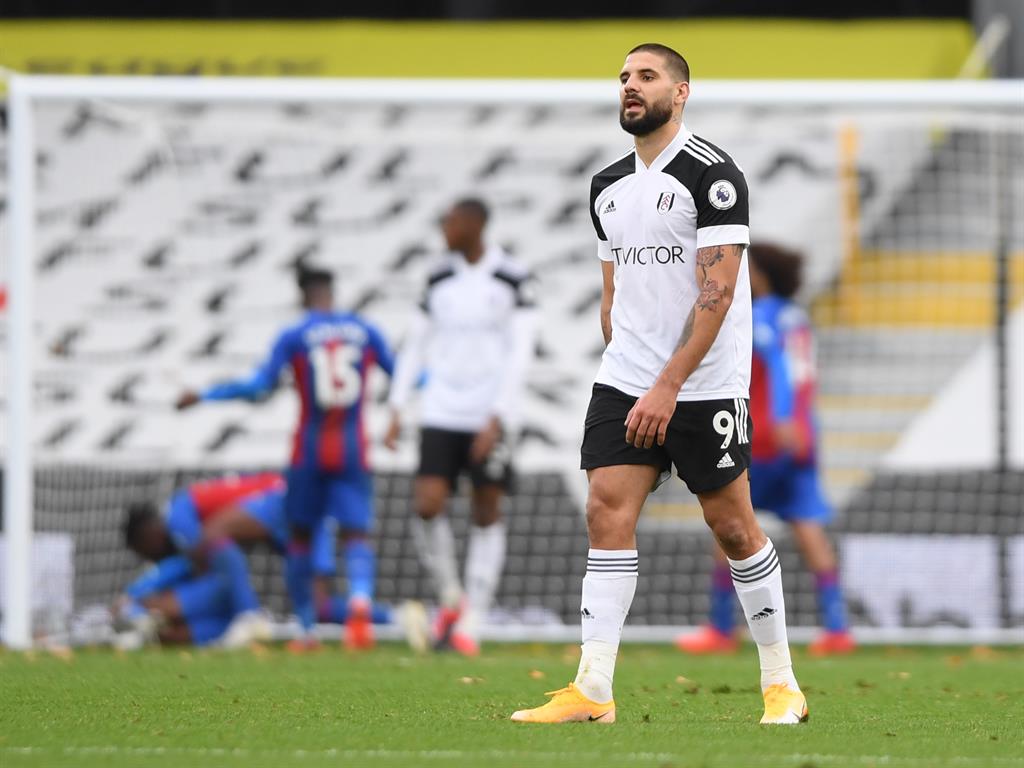 ONE TO WATCH — ALEKSANDAR MITROVIC/FULHAM: When Fulham were promoted via the play-offs, it seemed as though the Serbia striker (above) was their best hope of survival.

The Championship’s top scorer last season with 26, Mitrovic has matured from the combustible figure yellow-carded 22 seconds into his Newcastle debut.

And yet when Fulham were given a 98th-minute penalty at West Ham in their last league game, a previous miss had led Mitrovic to pass penalty-taking duties to Ademola Lookman, whose disastrous Panenka attempt cost them a point.

Mitrovic did step up to the plate for Serbia in their Euro 2020 play-off only for his miss to end Scotland’s 22-year exile from major international tournaments.

It is all part of a drop in form in which Mitrovic has failed to net in seven games since a brace in the 4-3 defeat at Leeds and has seen him score just three times in his last 77 Premier League attempts. Fulham need him to rediscover his touch.

After a rotten run of fixtures this could be a chance for Sheffield United to add to their solitary point so far, but this is a more dangerous challenge for Chris Wilder’s side than it would have been in the not-too-distant past. David Moyes’ West Ham have racked up an impressive 15 goals from their last seven away games in the Premier League and also appear set to welcome back Michail Antonio after injury.

■ 12 — Games without a Premier League win for Sheffield United

Having earned plenty of plaudits, Marcelo Bielsa’s Leeds have had a reality check with back-to-back 4-1 defeats to Leicester and Crystal Palace. The Gunners have lost four of their last six league games, including a 3-0 home defeat to Aston Villa last time out, to leave boss Mikel Arteta admitting they are ‘a long way’ short of where they need to be.

Liverpool boss Jurgen Klopp must have spent the last fortnight wondering if anyone will remain fit and healthy to try to overhaul Brendan Rodgers’ leaders. The Reds won last season after Sadio Mane made the most of Marc Albrighton’s challenge deep into injury-time and referee Chris Kavanagh, who gave that spot-kick — to Leicester’s consternation — gets the gig again.

■ 7 — Penalties Leicester have scored this term, the next most is three

Radio presenter Jordan North may have used Turf Moor as his ‘safe space’ on I’m a Celebrity but Sean Dyche has given the impression of a man eating insects this term and his side have lost all three home games by an aggregate of 0-7 so far. Skipper Ben Mee insists things will improve but Palace are a much more dangerous side this season with Eberechi Eze’s attacking flair meaning if you stop Wilfried Zaha you might not stop Palace.

Wolves fans have been given a glimpse of life should Adama Traore not sign a new deal, with his last five appearances all off the bench. They may continue to prosper but it certainly does not make Wolves more interesting to watch. Saints’ James Ward-Prowse has returned to training after a hamstring injury saw him pull out of the England squad.