LIVERPOOL finished 18 points clear of Manchester City last season so it is hard to say there was a single moment which made all the difference between the two teams.

But they meet again almost a year to the day since probably the single most defining minute, City’s appeals for a penalty against Trent Alexander-Arnold which were still under investigation by VAR at one end while Liverpool raced down the other for Fabinho to score a brilliant opening goal.

Jurgen Klopp’s side went on to win 3-1, to go nine points clear at the top, and it will not have gone unnoticed on Merseyside they could go eight points ahead of City with victory at the Etihad Stadium on Sunday.

If they do win, there is a good chance Diogo Jota will play a starring role, having scored six goals in four appearances, including a hat-trick in the midweek 5-0 victory at Atalanta. That 7-2 defeat at Aston Villa little more than a month ago suddenly feels like a bad dream. 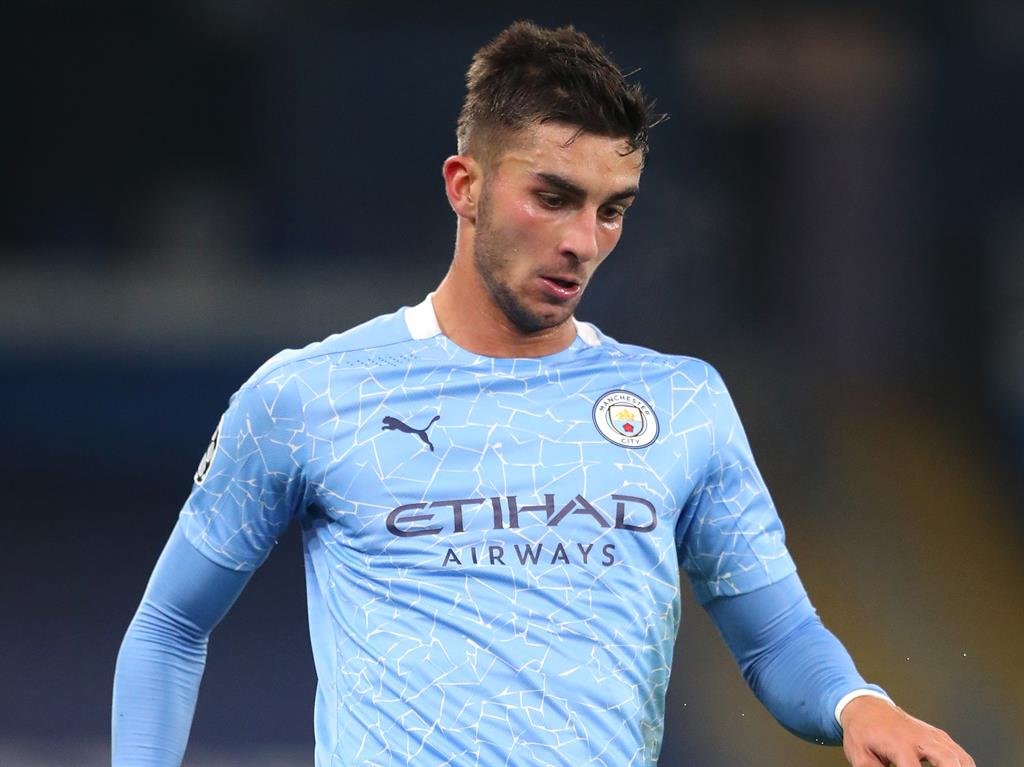 Liverpool will also want to avenge a 4-0 summer loss at City when there was a whiff of a hangover from having just secured their first title for 30 years.

City, of course, are not short of motivation either and the early signs are the defensive partnership of Ruben Dias and Aymeric Laporte is helping to plug the gaps exposed by the latter’s injury and Vincent Kompany’s departure last season, while Kyle Walker’s outstanding form at right-back is adding to the solid base.

Actually, Pep Guardiola’s side only conceded two more goals than Liverpool last season but no team nowadays is going to lose nine games and take the title.

Things have not been quite as impressive at the other end — a side that has scored 106, 95 and 102 goals in the last three seasons are only on nine so far — but injuries to Sergio Aguero and Gabriel Jesus clearly have not helped.

In their absence, 20-year-old Ferran Torres (above) has shown real quality up front, scoring again in their 3-0 win over Olympiakos, but Jesus’ sharp performance after coming on as a substitute is a huge boost for Guardiola.

It was noticeable the City boss brought Kevin De Bruyne, Raheem Sterling and Walker off as soon as possible. Even at this early stage, last year’s experience proves this is a game City cannot afford to lose.

Neal Maupay may return after being dropped for Brighton’s 2-1 defeat at Spurs after a reported dressing-room bust-up which boss Graham Potter said the striker admitted was ‘not his finest hour’. The Frenchman could have a point to prove against a Burnley side whose manager Sean Dyche is another man who does not suffer fools gladly. The Clarets badly need something here after taking a solitary point so far.

Just as Southampton have made it into the top four they have been dealt a devastating blow with Danny Ings’ knee injury ruling him out for four to six weeks. Saints have been far too impressive in recent weeks, though, to be seen as a one-man team. Newcastle had a scare of their own when Allan Saint-Maximin was brought off with a dead leg in the win over Everton but Magpies boss Steve Bruce was confident it is nothing serious.

It has not helped Ole Gunnar Solskjaer that his 100th game as Manchester United boss brought that lifeless 1-0 home defeat to Arsenal. If you based judgement on Sunday and Wednesday’s debacle in Istanbul, it does not look pretty but Ole’s been here a few times and pulled out a result that quietens the critics. Everton’s expectations have dipped after back-to-back defeats but while Richarlison is still banned, Lucas Digne and James Rodriguez may return.

Brendan Rodgers may have given the Premier League a blueprint of how to play against Leeds. In the absence of Kalvin Phillips with a shoulder injury, Marcelo Bielsa’s so-far impressive side could not cope with the speed of Leicester’s counter-attacks in their 4-1 loss. Their defence looked ponderous and, even though they are away, could get another big test against a Palace side who also play their best football on the break.

■ 68 — Per cent of the possession Leeds enjoyed against Leicester

Things hardly get easier for the Blades after narrow defeats to Liverpool and Manchester City but they need to stop being unlucky losers with just one point on the board. A 3-0 win over the Blues at Bramall Lane in July was a rare post-lockdown highlight for Chris Wilder’s team. They will not have to face the injured Christian Pulisic tomorrow but Chelsea made light work of beating the other one-pointers Burnley last weekend. 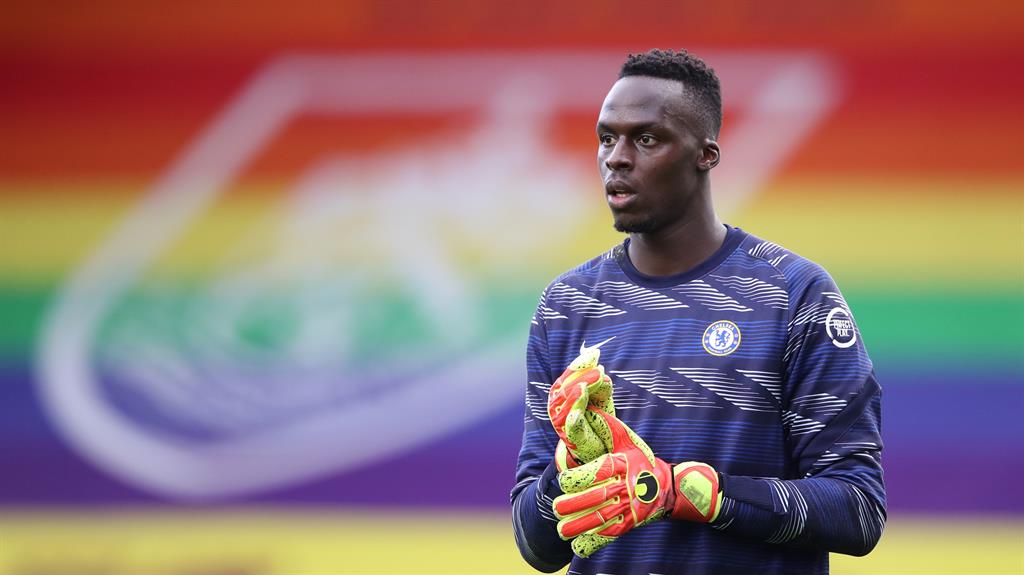 ■ ONE TO WATCH — EDOUARD MENDY / CHELSEA: The 3-0 win over Rennes made it six clean sheets on the spin for Chelsea’s new goalkeeper, a solidity Frank Lampard could only dream about with Kepa Arrizabalaga between the sticks. The Spaniard may be the world’s most expensive keeper but his confidence was clearly shot — a liability whose deficiencies sowed doubt in the entire backline — by the time Lampard bought Mendy (pictured). Since arriving for a relatively modest £22million, the French-born Senegal keeper has impressed his team-mates with words as well as deeds. ‘He has presence and catches the ball when he comes out. He is talking a lot, doing a great job,’ says defender Kurt Zouma. ‘He is super-intelligent, very calm. He has no problems speaking English.’ And no problems keeping clean sheets.

Fulham boss Scott Parker insisted he had seen big improvements even before the 2-0 win over West Brom that lifted them out of the bottom three. It is a sign of West Ham’s improvement that defender Aaron Cresswell’s sense of disappointment at leaving Liverpool empty-handed was justified, after the Hammers took the lead through Pablo Fornals.

The hope victory has given Fulham is in stark contrast to the sense of doom the Baggies feel in their search for a first win. If there is a ray of light it is they have performed better against the bigger clubs so far and Spurs remain capable of blowing hot and cold. But being able to bring Gareth Bale off the bench is a huge luxury.

We were here at times last season but Leicester are hardly fitting the script that 2016 was a one-off with the amount of time they spend in the top four. They go into the game just a point behind Brendan Rodgers’ old club Liverpool but this will prove a very different challenge against a Wolves side going into the weekend in the top six themselves, and having conceded just one goal in the four games since their 4-0 defeat at West Ham.

Back-to-back defeats have taken the shine off Villa’s superb start to the season while Arsenal will hope their victory at Manchester United kickstarts their own campaign. Villa keeper Emiliano Martinez will be anticipating this game more than most having left the Gunners in the summer when manager Mikel Arteta made it clear Bernd Leno was his No.1.