MATT HANCOCK has told police they will be expected to enforce the wearing of face masks in shops despite warnings it will be ‘nigh on impossible’.

The health secretary said officers will be responsible for issuing £100 fines to offenders when the law comes in on July 24, and refused to rule out extending compulsory mask-wearing to all workplaces.

As the official UK coronavirus death toll rose another 138 to 44,968, Mr Hancock said fatalities were up to 75 per cent higher among sales staff, and that only people with disabilities and under-11s would be allowed to shop without covering up.

He told MPs: ‘Should an individual without an exemption refuse to wear a face covering, a shop can refuse them entry and can call the police if people refuse to comply.’ But the Police Federation — which represents front-line officers — said shopkeepers would have to ensure their customers obeyed the rule.

Metropolitan Police Federation chairman Ken Marsh said: ‘It will be nigh on impossible for enforcement because you won’t have a police officer on every shop door because there isn’t enough of us.’

Police chiefs also revealed they were not consulted over the change to the law on Monday. Martin Hewitt, of the National Police Chiefs’ Council, said it expected retailers to manage entry into stores ‘with police involvement as a last resort’.

But Paddy Lillis, of shop workers’ union Usdaw, warned its members were ‘already dealing with more abuse than normal and this could be another flashpoint’.

Mr Hancock also found himself on a collision course with business leaders who warned trade would suffer.

Peter Cowgill, of JD Sports, said: ‘The guidance is that our store colleagues are not really to get involved and it’s a police matter to enforce rather than for them to get involved in any potential public disturbances. It’s the inconsistencies and the indecisiveness that causes the lack of confidence. I think the delay up to the 24th is quite confusing as well.’

Shadow health secretary Jonathan Ashworth accused Mr Hancock of ‘muddled messages’ and demanded to know whether the government is advising people to go back to their workplaces.

‘People want to do the right thing but muddled messaging just hinders that,’ said Mr Ashworth.

Mr Hancock criticised his Labour counterpart’s ‘tone’ and accused him of ‘trying to turn this into a party political football’. Tory MP Sir Desmond Swayne called the new rules a ‘monstrous imposition’ and some Conservatives tore up their party memberships as #NoMask trended on social media.

London mayor Sadiq Khan revealed fewer than two people a day have been fined for not wearing a mask on the Tube since it was criminalised last month. 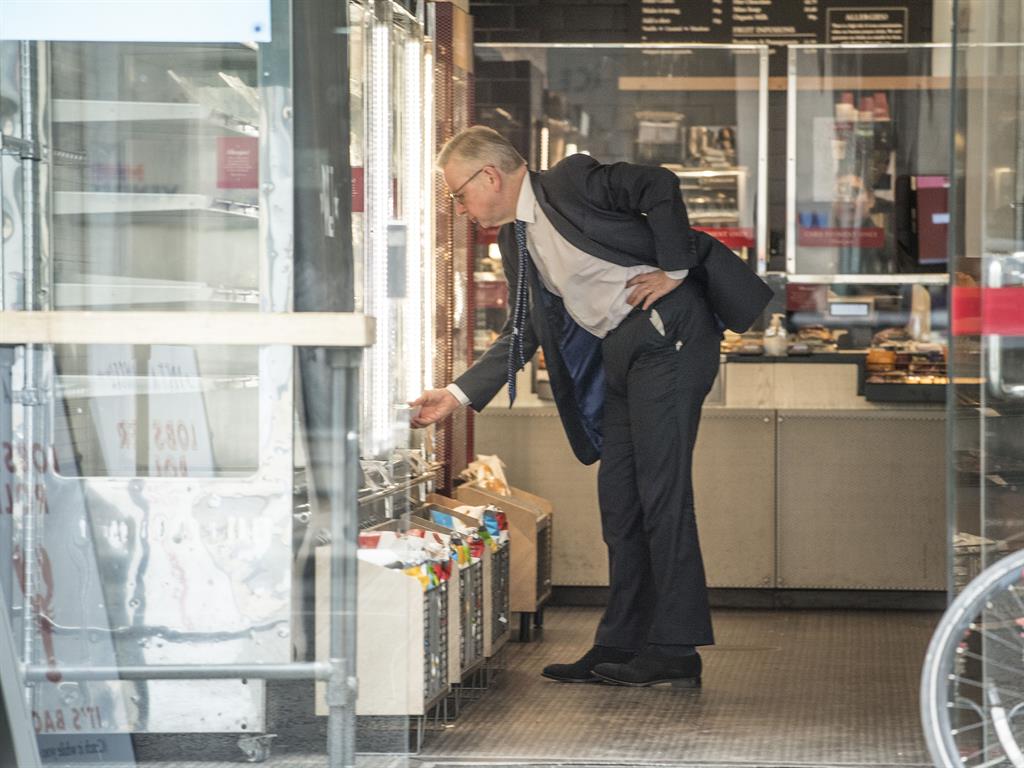 ■ A MASK-FREE Michael Gove (pictured) was pictured buying lunch in a Pret a Manger shop yesterday… after announcing that people would cover their faces to shop because of their ‘good manners’. The Cabinet Office minister said on Sunday he did not think face masks should be mandatory in shops — only 36 hours before the government announced that they would be.