THE coronavirus vaccine from Pfizer — which is due to arrive in the UK before the end of the year — is 95 per cent effective and, crucially, works in older people, according to new data from the firm.

The news comes just two days after health secretary Matt Hancock said the NHS will be ready to roll out vaccines by December 1, though he expects the bulk to happen in the new year.

The pharmaceutical giant and its partner BioNTech announced last week that their vaccine was more than 90 per cent effective in preventing Covid-19, but new figures from 170 participants in their clinical trial showed the jab was actually 95 per cent effective.

It also had a 94 per cent effectiveness in those aged 65 and over.

Of the 170 Covid-19 cases in the new analysis, 162 were observed in the placebo group versus eight in the vaccine group.

Of those taking part in the trial, 42 per cent were from diverse ethnic backgrounds and 41 per cent were aged between 56 and 85 — older age groups are most at risk of serious illness from Covid-19.

In the new analysis, there were ten severe cases of Covid-19, with nine in the placebo group and one in the vaccine group.

Scientists welcomed the results and said it was ‘excellent news’ that the vaccine is 94 per cent effective in older patients.

The vaccine has been tested on 43,500 people in six countries and no safety concerns have been raised, although around 2 per cent of those given the jab suffered a headache and fatigue. 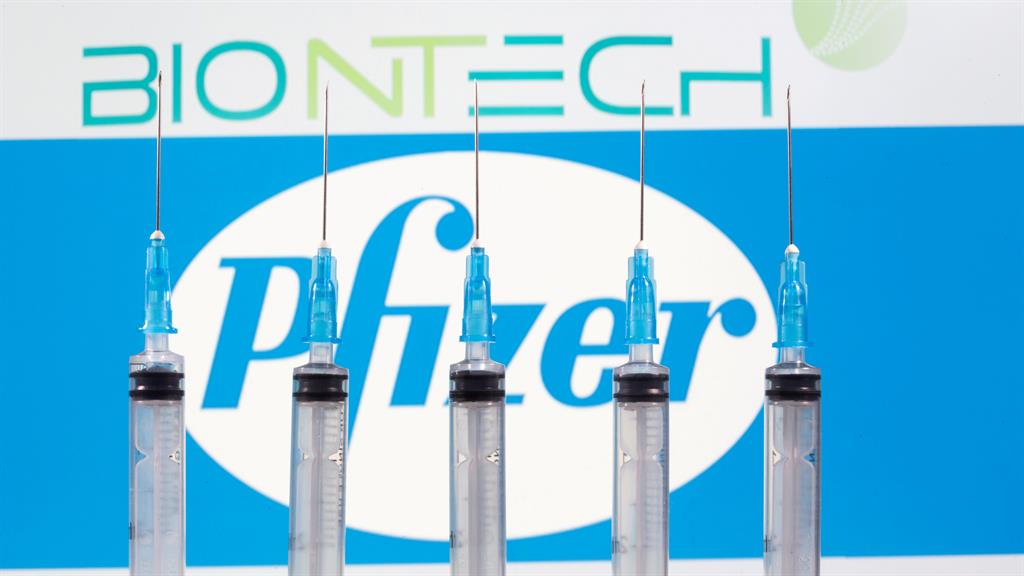 The UK has secured 40million doses in total of the vaccine, with ten million due in the country by the end of the year if the vaccine is approved.

People will need two doses, meaning not enough vaccine has been secured for the entire UK population of approximately 66million.

Another jab, from US firm Moderna, was shown this week in early data to be almost 95 per cent effective.

The UK has ordered five million doses of that jab and also awaits the results of the Oxford University and AstraZeneca vaccine study, which is due to report soon.

Changes to the human medicine regulations announced in October will allow the Medicines and Healthcare products Regulatory Agency (MHRA) to authorise temporary supply of vaccines, if one becomes available before 2021.

This means that if a vaccine is found to meet the safety, quality and effectiveness standards by the MHRA, then vaccinations can begin without needing to wait for the European Medicines Agency.

Mr Hancock has said the NHS will be ready to roll out vaccines by the start of next month and that the MHRA could approve a jab ‘within days’ of a licence application.

A government spokeswoman said: ‘Pfizer’s latest announcement is encouraging news and we are working to understand what it means for the UK.

‘Thanks to the work of our vaccine taskforce we have pre-ordered 40million doses of this vaccine.’

Pfizer chief executive Albert Bourla said yesterday that the firm is preparing to file for emergency use authorisation within days from the US Food and Drug Administration.

Today, Mr Bourla said: ‘The study results mark an important step in this historic eight-month journey to bring forward a vaccine capable of helping to end this devastating pandemic.

‘We continue to move at the speed of science to compile all the data collected thus far and share with regulators around the world.

‘With hundreds of thousands of people around the globe infected every day, we urgently need to get a safe and effective vaccine to the world.’

Ugur Sahin, co-founder of BioNTech, said the data shows a high rate of protection against Covid-19 can be achieved ‘very fast’ after the first dose.

Stephen Evans, professor of pharmacoepidemiology at the London School of Hygiene and Tropical Medicine, said: ‘This announcement in a press release is very good news indeed.

‘It seems there is some evidence that in older adults (but we do not have data in detail and there are probably no data for 80 years and older) there is also very good efficacy with minimal side effects.

‘This is again very good news, not just for this vaccine, but as it also makes it more likely that other vaccines will also be reasonably effective in older adults.

‘There is also good news that severe Covid-19 is reduced as well as mild disease.

‘Again, there is considerable uncertainty because results are based on only 10 cases, but this is nevertheless good evidence that the vaccine protects against severe disease.’

Professor Trudie Lang, from the University of Oxford, said: ‘The detail on achieving 94 per cent protection in the elderly participants in the trial is particularly excellent news.

‘The company are reporting that they now have enough efficacy data to submit for approval from the regulatory authorities, who will undertake a detailed assessment of both the efficacy and safety data.

‘We will need to wait and learn over time how long the protection lasts, and to see whether this vaccine can also prevent transmission.

‘Meanwhile, this vaccine does look likely to have a strong role immediately once it is approved in protecting health workers and the vulnerable from disease.’

The Pfizer vaccine has been shown to produce both an antibody and T-cell response in the body to fight coronavirus.

Pfizer and BioNTech expect to be able to produce up to 50million vaccine doses globally in 2020 and up to 1.3billion in 2021.