POLICE have released video footage of a man they ‘urgently’ want to speak to following a two-hour city centre stabbing spree in which one person died and seven others were injured.

The CCTV image was made public after a knifeman struck randomly at four different locations across one-and-a-half miles of Birmingham early yesterday. A witness told how he saw a young woman stabbed several times in the neck before her assailant ‘calmly’ walked away. Armed police were on the streets of the UK’s second largest city yesterday, although the attacks were not believed to be terror- or gang-related.

The person who died was a 23-year-old man. Another man, aged 19, and a 32-year-old woman suffered critical injuries. Five other people, aged between 23 and 33, were also injured.

Prime minister Boris Johnson tweeted: ‘All my thoughts are with those affected by the terrible incident in Birmingham last night.’ 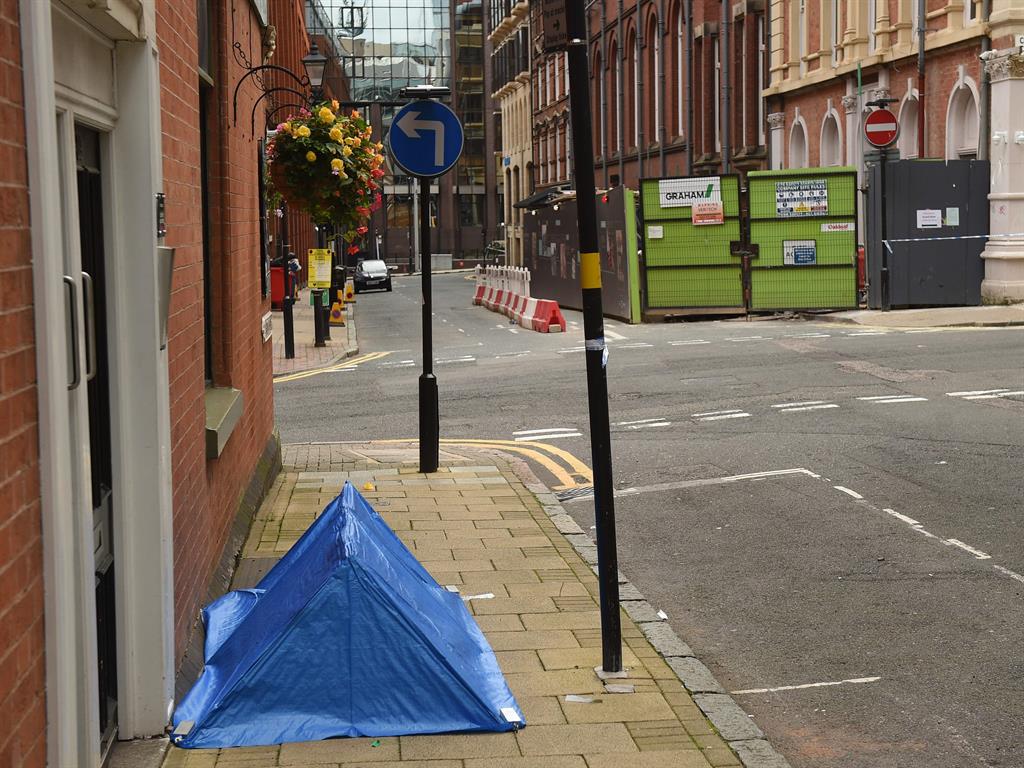 The killer began his murderous spree at 12.30am. It ended at 2.20am. A knife was later recovered from a drain.

Bar manager Savvas Sfrantzis, 64, told how he saw the knifeman stab a woman in the neck several times before calmly walking off. ‘She was only young, maybe in her 20s,’ he said. ‘He didn’t panic, he didn’t look like he was worried — he looked relaxed about what he had done. He looked like he didn’t care for anything. I was surprised because I thought he would run away but he just walked.’

He said the man only broke into a run as members of the public started shouting: ‘Stop him, he’s stabbed somebody.’

Mr Graham added: ‘The events are tragic, shocking and understandably frightening. Please be assured that we are doing absolutely everything we can to find whoever was responsible and try to understand what exactly happened.’

Five casualties — including the man who died — were taken to the Queen Elizabeth Hospital. Two others went to Heartlands Hospital.

An eighth person, who received minor injuries, did not require hospital treatment.

11 stabbed during night of violence across capital

A MAN was stabbed to death and another victim was fighting for his life yesterday after a night of knife crime in London that left nine others injured.

Sean Willams, 34, was stabbed in the neck in the early hours of yesterday after attending an illegal rave in Catford, south London. He is believed to have been attacked after intervening in a fight, the Metropolitan Police said.

Police have appealed for information after he died at the scene at 6.15am. A second victim, 37, went to hospital with a non-life-threatening knife injury to his hand. No arrests have been made.

It comes after five men were hurt during a brawl on Saturday in Bexleyheath, south-east London, leaving one of them in a critical condition.

The fight broke out at 9.30pm on the same road where a 17-year-old girl was stabbed last week. Five men have been arrested on suspicion of causing grievous bodily harm. Meanwhile, two teenagers were taken to hospital after being found with stab wounds on the platforms of West Ham and Abbey Road DLR stations in east London at around 7pm.

And at 8.30pm, paramedics alerted police regarding a 14-year-old boy stabbed in Stockwell, while a man in his 30s was stabbed nearby at 2am yesterday.