THE parents of a two-year-old girl whose cancer has returned are appealing for help to raise £500,000 after she was denied a second NHS operation.

Esme Handley was diagnosed with acute myeloid leukaemia while on a family holiday to Greece with her parents, Will and Rebecca, in June last year.

After five months in hospital and three rounds of chemotherapy, hopes of a recovery were dashed earlier this month as it was confirmed her cancer had returned. As part of her treatment, Esme had a stem cell transplant at the Royal Marsden Hospital in south London last September but NHS rules mean she cannot have another within 12 months.

The family have been told it could cost up to £500,000 to fund a second transplant and have raised more than £132,000 in donations — but are desperate for more.

Mr Handley, 43, said Esme had looked ‘at her fittest, bubbliest and happiest in months’ before the cancer returned.

‘None of this makes any sense but equally for me it’s the demon that’s come to me in sleepless nights since diagnosis and is now a reality,’ he added.

The family had ‘inexpressible gratitude’ for the care she received at the Royal Marsden but her dad said ‘we know that for Esme the best course of action is to try to get a second transplant as soon as possible’.

During her treatment she suffered a bout of acute sepsis and a ‘horrific’ case of anaphylactic shock in response to one medicine. Family and friends have dubbed Esme ‘Lion Heart’, with her father saying she ‘bulled through her treatment with the courage of an SAS trooper and even learnt to take her own bloods and change her own dressing, much to the amazement of seasoned staff’. 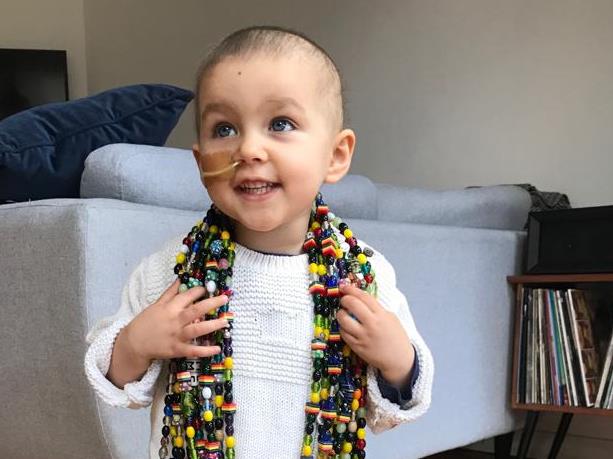 Mrs Handley, 38, suffered four miscarriages before giving birth to Esme, their only child. Both parents have given up their jobs in digital marketing and advertising to care for their daughter.

‘While the £500,000 target is our best understanding, we are still unsure of the exact figure as we’re still in negotiation with a number of different hospitals in the UK and abroad,’ Mr Handley said. ‘However, we need to start now rather than wait until we have all the details — as by then it may be too late.’

Any money left over will go to the Children’s Cancer and Leukaemia Group. For more details or to donate, see www.gofundme.com/help-2-year-old-esme-cure-her-leukaemia