WELCOME to the house of fun — a Victorian end-of-terrace in the heart of Hackney which features a playground-style slide from the kitchen into the sunken living space, thanks to a complete overhaul to accommodate the needs of a growing family.

There wasn’t much to smile about when Seán McAlister, one of the directors at Seán And Stephen architects, first set eyes on the three-storey mid-Victorian house. ‘It was a bit sad and in a terrible state as it hadn’t been touched in about 70 years and was split internally into two flats,’ Seán says. ‘My clients were a family with one kid — now three — and my brief was to create a home that would grow with them and suit who they were. I wanted the house to match how much fun they are and at one point a slide was mentioned, so I had to find a way to integrate it.’

Seán had a lot of hurdles to overcome — not least ensuring that the local building control team was happy with the safety aspects — and considered seven options before deciding on a bespoke timber slide next to a small flight of stairs, linking the kitchen with the basement living area.

‘We had to remove some of the floor to free up space and created a double-height atrium,’ he says. ‘The slide’s made from timber that’s different from the flooring so there’s a colour change and the bricks at the bottom are chamfered so there are no sharp corners: 25-year-olds have been there for a party, with no injuries.’

The cellar was enlarged and the loft converted to transform the property into a spacious, split-level home. The ingenious puzzle-like layout incorporates a sunken living space and utility in the new basement, an extended kitchen/dining room and atrium on the lower-ground floor and an entrance hall and library on the upper-ground level. The master bedroom, which boasts open wardrobes and an en suite, as well as another bedroom and bathroom, are on the first floor, two children’s bedrooms and a family bathroom are on the second, while the study is in the loft.

Walls have been left exposed in the communal areas — which feature a mix of original and reclaimed-style new bricks. Oak and exposed steel have been used extensively. Steel beams in the kitchen were painted to match the steel-framed arched window and French doors — striking architectural features in their own right which help to flood the area with light. ‘We were lucky in that the clients trusted us a lot, so that we were able to introduce the arched windows in the kitchen, atrium and internally, and that they saw the value of taking out a bit of floor and making the basement,’ Seán says.

Work took three years and the family moved in last October. ‘They love it and haven’t stopped showing it off. Adults use the slide just as much as the kids.’

Standard 1960s terraces aren’t known for their practical layouts — which is why the owners of this Nunhead house turned to design practice Jailmake to come up with a way of improving the functionality of their living space.

Their solution was to flip the layout around and add an extension at the back, creating a full-width kitchen/dining room with folding doors leading out to the garden. The space now flows beautifully as, coming in through the front door, your gaze is drawn to the bright, multi-functional living and dining space. A central glazed partition boosts light and zones the kitchen and living areas, while sycamore cabinets seamlessly integrate appliances to keep the effect pared down and simple.

Clutter’s been kept to a minimum thanks to the ply-clad utility room at the front, which has space for bike storage and versatile floor-to-ceiling shelving that can be rearranged to cope with bulky items. Equal attention to detail has gone into the redesign of the garden, where flowers and vegetables are planted in easily accessible waist-high steel containers which will rust down to mellow red and brown tones.

The challenge of building on a triangular plot has been admirably overcome in the design of this extension to a Victorian semi-detached house along the River Quaggy. Rather than trying to echo the original architecture, R2 Studio Architects opted for a two-storey, contemporary timber structure which opens up connections to the very different front, side and back gardens. 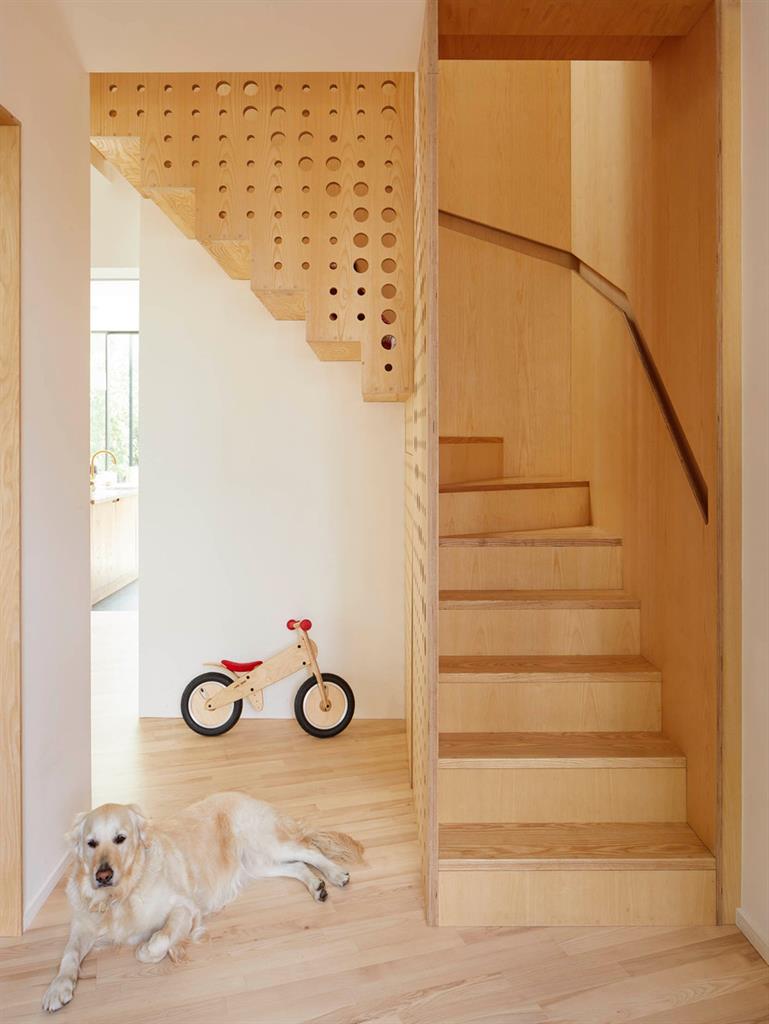 Interior spaces are semi open-plan and each enjoys a different view: the new dining room faces the pond, the family room looks out over the Japanese garden and the living room, in the original part of the house, is adjacent to the Mediterranean-style front garden. The kitchen, floors, window seat in the family room and the stairs are fashioned in solid ash and ash-veneered plywood, while walls and ceilings are mostly painted white, with flashes of accent colour providing contrast to the otherwise restrained palette.

This weekend is a high point in the calendar for anyone who likes to marvel at the capital’s mesmerising range of architecture. From Barnet to Bromley and Richmond to Redbridge, more than 800 amazing buildings are throwing open their doors for Open House London — the world’s largest architectural festival — which has been held annually since 1992.

You’ll be able to tour one-off homes, housing developments, offices, churches, schools, landmark structures and works-in-progress, meet architects and engineers and take part in a programme of walks and talks.

Dozens of sites are participating for the first time this year — among them is the derelict Millenium Mills flour factory, Greenwich’s Victorian Pumping Station and a host of contemporary and historic houses.

Many of the participating buildings and sites don’t normally allow public access. Best of all, entry’s free everywhere, though you may need to book in advance and entry times vary.