A ONE-LEGGED golfer who has represented England is suing for discrimination after a council stopped him from using his buggy on a course.

Paul Houghton claims he was told to medically prove he was disabled before being allowed to drive the cart on to the fairways — despite the evidence of his prosthetic leg.

Even after explaining he is a member of the European Disabled Golf Association, he was told he required a written letter from his doctor. 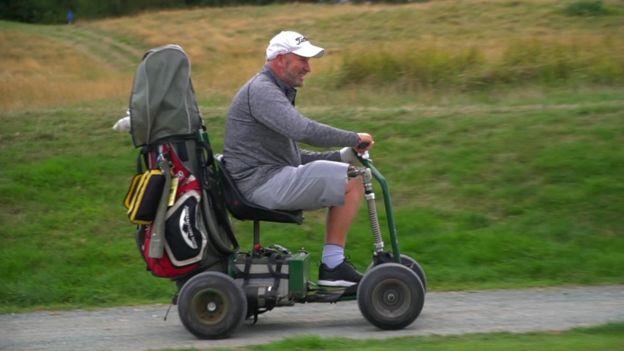 The 60-year-old of East Hanningfield, Essex, said: ‘I am a proficient golfer and have represented my country, so to be told I am not allowed on a course left me feeling pretty terrible.

‘They tried to tell me that it was not personal but of course I am going to take it personally. It sends the message that disabled people aren’t welcome.’

The father-of-two lost his leg 16 years ago after contracting the flesh-eating bug necrotising fasciitis. Because of his disability, he needs a buggy to move around the course when playing 18 rounds.

But he was stopped from using the cart at Hartswood Golf Club in Brentwood in August 2016.

He said: ‘I was so shocked when they told me I needed prior approval from Brentwood borough council. I felt absolutely humiliated that I was not allowed to play the game I love because of a disability.’

Cae Menai-Davis of The Golf Trust charity said: ‘Golf is a sport for everyone and making it difficult for a disabled golfer to use a buggy isn’t just bad policy, it is bad business.

‘There is a huge, untapped group of people with learning and physical disabilities that want to play the game and who will benefit hugely from it.’

Brentwood council denied any discrimination, insisting it is ‘committed to ensuring safe access for everyone to all its facilities’. A spokesman added that a full statement will be made ‘once legal action has concluded’.