BORIS JOHNSON has said he is committed to securing a new deal with Brussels ahead of Britain’s departure from the EU — and that leaving without one would be a ‘failure of statecraft’.

The prime minister, in Dublin for talks with Irish premier Leo Varadkar, said he believed it was possible to secure an agreement ahead of the UK’s scheduled withdrawal on October 31.

But Mr Varadkar said that while Ireland was open to alternative solutions to the Northern Ireland backstop, it had yet to see any ‘legally workable’ proposals from the UK.

Mr Johnson’s insistence that he wants to see a deal comes after Amber Rudd quit his cabinet at the weekend, saying she had seen little evidence ministers were trying to find an agreement.

Standing next to Mr Varadkar, an animated PM said: ‘I want to find a deal. I have looked carefully at no-deal. Yes, we could do it, the UK could certainly get through it, but be in no doubt that outcome would be a failure of statecraft for which we would all be responsible.

‘I would overwhelmingly prefer to find an agreement. I do believe that a deal can be done by October 18, so let’s do it together.’

While he did not underestimate the ‘technical problems’ involved in resolving the issue of the Irish border, he said the UK was ready to bring forward proposals to address the ‘full range of issues’.

They included the ‘electronic pre-clearance’ of goods and the ‘unity’ of the island of Ireland for agri-foods. ‘Strip away the politics and at the core of each problem you find practical issues that can be resolved with sufficient energy and a spirit of compromise,’ he said.

Mr Varadkar said that he was willing to work with Mr Johnson as a ‘friend and ally’ but replacing a ‘legal guarantee with a promise’ was not acceptable.

‘Avoiding a return to a hard border is the priority of this government,’ he said. ‘We are open to all alternatives legally workable but we have not received such to date.’ Rallies have been held along the border against the possible impact on peace and jobs of a return to a frontier for customs checks.

Asked about the situation in the Commons, Mr Johnson said: ‘We will come out on October 31, and I’m sure that parliamentarians will see the wisdom of doing that and honouring the referendum result.’ 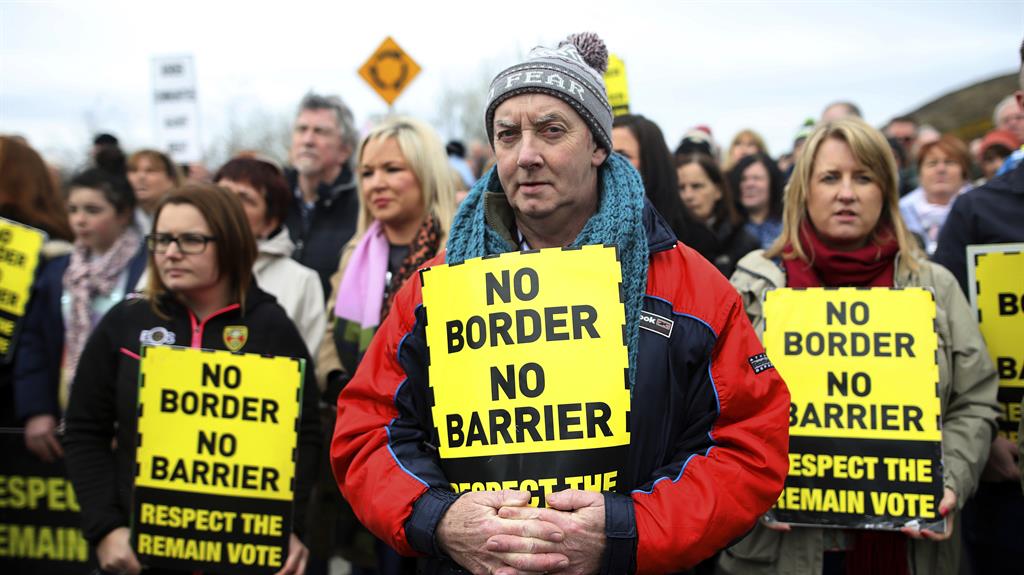 But his comments regarding a single regulatory zone north and south of the border prompted criticism from DUP leader Arlene Foster.

She said: ‘He has already ruled out a Northern Ireland-only backstop because it would be anti-democratic and would mean our core industries would be subject to EU rules without any means of changing them.’

LEO VARADKAR’S offer to be ‘your Athena’ was not intended as a veiled jibe at Boris Johnson over Brexit, a source close to the Irish prime minister said.

Speaking ahead of his meeting with Mr Johnson in Dublin, the Taoiseach turned to his British counterpart and said securing trade agreements with the EU and US in less than three years would be a ‘Herculean’ task.

As Mr Johnson laughed, he added: ‘We want to be your friend and ally, your Athena, in doing so.’ According to Greek mythology, Athena, the goddess of wisdom, repeatedly helped Hercules, her half-brother.

She stepped in after Hercules went mad and killed his children then helped him complete 12 near-impossible atonement tasks.

Twitter users saw comparisons with Brexit, but the Irish source said: ‘It’s well known that Boris is into his classics and literature, and the Taoiseach meant the reference as a compliment.’