THIS striking image of famous chef Albert Roux at work has taken top spot in an event photography contest. Entitled Eyes For Detail, it captures the moment before a plate of gourmet food was served up at the Wimbledon tennis championships last year. Taken by Deb Porter, the photo was hailed as a ‘shining’ illustration of the commitment and attention to detail needed in the events industry. The competition held by recruitment and training firm Off To Work attracted 2,000 entries.

A SPARE bed for an imaginary friend and a room to store 200 butterflies for a wedding are among the bizarre requests made by Travelodge guests. Others include a bag of soil from Liverpool’s Anfield Stadium and a face mask for a snoring husband. One businessman wanted his bed moved to a beach for ‘blue sky thinking’. Travelodge, which surveyed its 575 hotels, said it receives ‘thousands’ of interesting requests each year.

HALF of us would not invest money today — Friday the 13th — or put up umbrellas indoors for fear of bad luck, a poll finds. Superstition also stops three in five of us walking under ladders, while a fifth of us would avoid treading over three drain covers in a row. The study of 2,000 Brits found 46 per cent knock on wood and 41 per cent would pick up a penny for good fortune. ‘Some people feel it can impact anything from their personal life, to their finances,’ said Adam Vettese, from investment platform eToro, which commissioned the poll.

ACTIVISTS scaled scaffolding at parliament to call for Britain to make amends for its role in the slave trade, including by cancelling ‘All African debt’. Three Action for Climate Truth and Reparations protesters unfurled a banner demanding ‘an honest acknowledgement of the harm and human cost of slavery and colonialism’. They also urged the government to ‘right the wrongs of the past’. The trio were later removed from the site.

A RECORD label boss who recruited Coldplay and Kylie Minogue to play at his Somerset pub could be forced to call time after rent soared by 130 per cent. Miles Leonard, 53, chair of Parlophone and Warner Bros Records, hosted gigs in the Ring O’ Bells in Compton Martin. But Butcombe Brewery upped the rent from £28,000 to £65,000 — a ‘kick in the teeth’ leaving him unable to stay. The brewery said it would take over next year to ‘protect the pub’s future’.

■ JOE WICKS is this morning due to finish a 24-hour workout in aid of Children In Need. Streamed live on BBC iPlayer, the marathon session has included HIIT classes, cycling, rowing, running and boxing.

■ GOOGLE is to stop providing free unlimited storage on its photo service. From June 1, any uploaded images and videos will count towards the free 15GB of storage that comes with a Google account.

■ PLANS to build a tunnel for the A303 near Stonehenge have been given the go-ahead by transport secretary Grant Shapps. Experts have warned it will cause ‘irreversible harm’ to the World Heritage Site in Wiltshire.

■ A HOMEOWNER woke up to find his driveway partially blocked by two traffic bollards and a mini-roundabout. Estate agent Zakir Malik, 33, says he now has to mount the pavement to get in and out in Hodge Hill, Birmingham.

■ A MOTORIST knocked down a town’s Christmas Tree just hours after it was put up. The woman needed hospital treatment after her Toyota Starlet collided with the tree in Bury St Edmunds, Suffolk.

■ FLOOD victims in Yorkshire are living in caravans a year after the deluge hit due to insurance delays. Lorna Ulyett, 40, of Doncaster, said her partner Claire, 41, tried to take her own life because of the stress.

■ HOME repossessions fell by 88 per cent in the third quarter of 2020 compared with the same period last year. But UK Finance warned of problems ahead with an increasing number of people getting into mortgage arrears.

■ A ‘BRAVE old boat’, which saved 600 soldiers from Dunkirk in World War II is to be restored. Vanguard, one of the ‘little ships’ to take part in the 1940 evacuation, was saved from a mud bank on Canvey Island.

■ A BUTCHER is selling Britain’s most expensive rib-eye steaks — at £120 for 9oz. They are from beer-drinking wagyu cattle raised in Japan and are being sold by Tom Hixson in Smithfield, London.

PEACE talks aimed at permanently ending fighting between Azerbaijan and ethnic Armenian forces are being held in Moscow. French and US diplomats are due to join the discussions over the conflict in the Nagorno-Karabakh region. Russian peacekeeping troops were sent in on Tuesday under a ceasefire deal that handed territory to Azerbaijan and led to calls for Armenian PM Nikol Pashinyan to resign.

THIRTY-FIVE riot police have been injured in clashes with far-right protesters who went on an Independence Day march through Warsaw in defiance of Covid restrictions. Poland’s right-wing government condemned organisers for letting activists attend on foot instead of in cars as planned. Police made 36 arrests during Wednesday’s violence and three officers remained in hospital last night.

FORENSIC investigators inspect bullet holes after shots were fired at the Saudi Arabian embassy in the Netherlands early yesterday. Police found several bullet casings outside the building in The Hague. No-one was hurt in the shooting, which was reported at around 6am. The attack came a day after three people were wounded in an explosion at a cemetery in Jeddah, Saudi Arabia, as US and European officials commemorated Armistice Day. There is no indication the two incidents are linked. 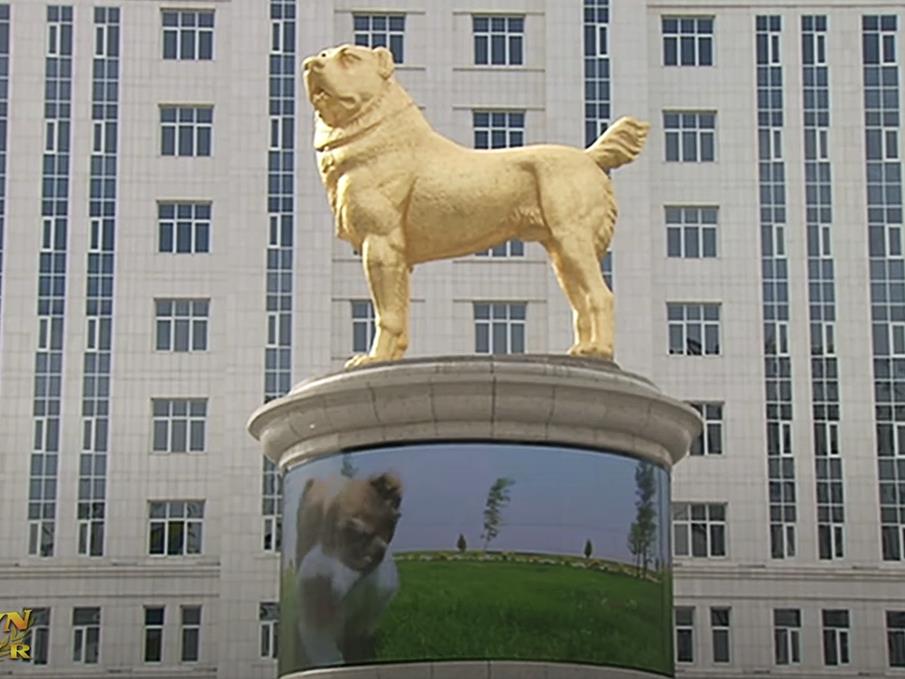 THE president of Turkmenistan has commissioned this giant gold statue of his favourite type of dog. Gurbanguly Berdymukhamedov, who recently regaled his cabinet with a poem about the Alabai breed, unveiled the sculpture in the capital Ashgabat. Its pedestal has a wraparound LED display showing footage of an Alabai. 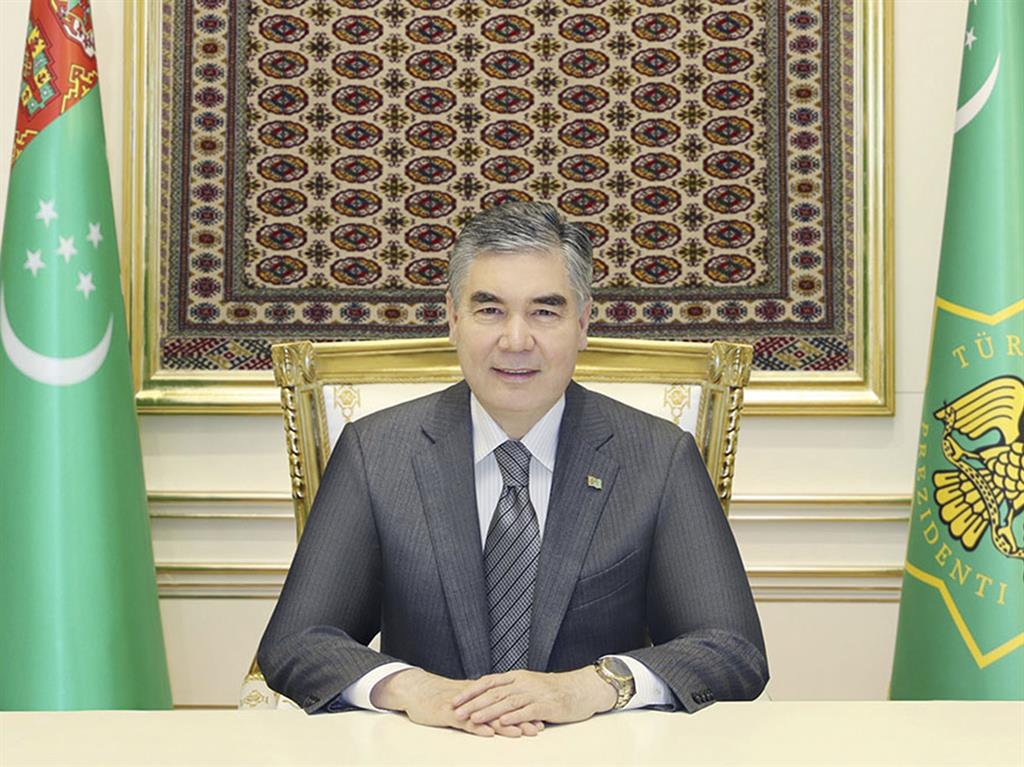 The breed has accompanied nomads in the Central Asian nation for centuries and is seen as a source of national pride by the president, a former dentist.

■ AROUND 200,000 pople were forced to flee their homes when Typhoon Vamco flooded low-lying areas as it passed over the Philippines. Rivers burst their banks, trees were toppled and powerlines were knocked out.

■ EX-FRENCH president Nicolas Sarkozy has called for charges that his 2007 campaign was illegally funded by Libyan leader Muammar Gaddafi to be dropped, after a businessman U-turned on claims he delivered bags of cash.

■ POLICE in Singapore have arrested 21 people for allegedly being members of an unlawful society. They are accused of being in the Shincheonji Church of Jesus — a banned sect widely blamed for thousands of coronavirus cases in South Korea.

■ EIGHT peacekeepers have died in a helicopter crash in Egypt. Six Americans, a French and a Czech member of the force monitoring the Israeli-Egyptian peace accord were killed near Sharm el-Sheikh. Another American was injured.

■ TWO boys caught carrying the body of a murdered child in a suitcase have been arrested. The suspects, aged 14 and 15, were detained in Mexico City after dropping the partially opened case, revealing the victim’s head.