A CCTV image of a suspected thief provoked hilarity when social media users noticed he was a dead ringer for former X Factor judge Louis Walsh. Kent Police issued the picture after building materials were taken in Tenterden. Residents soon spotted the resemblance to Walsh, 68, who often gushed about singers having star quality. ‘You look like a thief, you sound like a thief, you are a thief,’ quipped Caroline Kingsnorth.

POP star Sandie Shaw has said she is now talking to ex-husband Jeff Banks — 50 years after the fashion designer left her skint and ‘living in a caravan’. Eurovision winner Shaw, 73, lost every penny she made from hits such as Puppet On A String after her 1968 marriage to Banks, now 77. But she ‘rebuilt’ her life and the pair are talking again. ‘It’s huge progress. We were both very young,’ she told Tom Watson’s Persons Of Interest podcast. 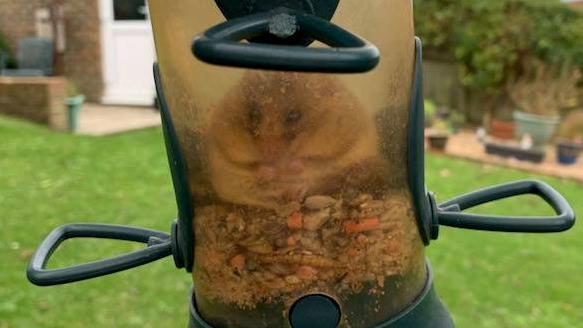 A GREEDY dormouse who crawled into a bird feeder ate so many seeds it became too fat to escape. The rodent was trapped for hours as birds pecked at the treats around it. Cheryl Hewins, 72, who found it at her Isle of Wight home, said: ‘I’m glad he enjoyed his meal.’ Catherine Holder, 34, of the Hampshire Dormouse Group, added: ‘It was hilarious. He just sat there like an absolute chunk.’

…as feeder Watches the birdies 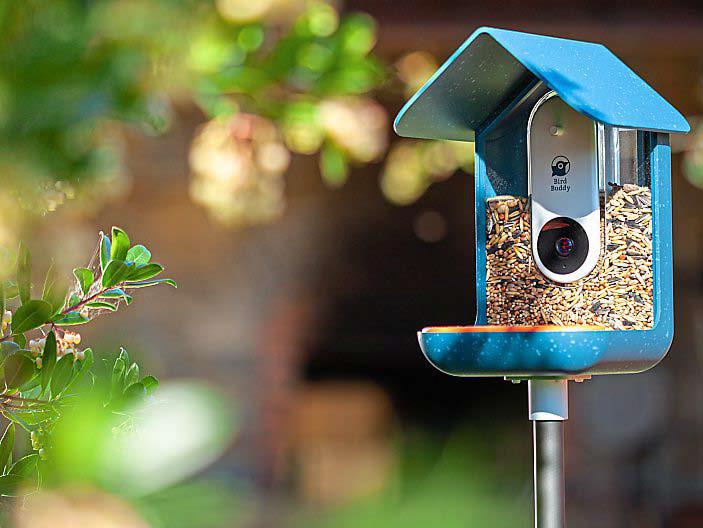 IT’S a hi-tech time-saver for twitchers! A feeder identifies species of birds stopping in your garden for a bite, takes their photo and texts it to your smartphone. The Bird Buddy, costing £169, will boost conservation efforts by providing a database of bird populations and their movements. Founder Ziga Vrtacic said the device will ‘enhance the bird watching experience’.

Wine not try chardonnay with the turkey?

TURKEY and chardonnay, beef and shiraz or nut roast and pinot noir are all perfect Christmas pairings, wine experts say. Other festive favourites include Bratwurst sausages and beer, port and cheese and sauvignon blanc for the Boxing Day bubble and squeak. The Virgin Wines study found the first drink is at 1.19pm on average — but a third said it was the one day they enjoyed alcohol at breakfast.

■ BLUE whales are making a comeback in the south Atlantic after being hunted to the brink of extinction 50 years ago. The rare mammals were sighted 58 times off British territory South Georgia during a survey in February.

■ ROAD projects in the Amazon may lead to 5.9million acres of deforestation over 20 years. The planned 12,000km of new or upgraded roads could encourage land speculation and illegal byways, researchers warned.

■ CRAMPED conditions in Greek migrant camps could amount to ‘inhuman and degrading treatment’, says a report by the European Committee for the Prevention of Torture. It also raises concerns that some asylum seekers are being illegally returned to Turkey.

■ WARSAW’S mayor has criticised police for using tear gas on female demonstrators at the latest protest against Poland’s strict abortion restrictions. Rafal Trzaskowski said ‘there were more policemen than protesters’ at Wednesday’s event.

■ FORMER South African president Jacob Zuma yesterday walked out of a commission investigating corruption, claiming it was biased against him. The 78-year-old faces questions over his role while in office between 2009 and 2018.

■ HURRICANE IOTA caused devastation in Nicaragua before dissipating over El Salvador. The death toll in Nicaragua hit 16 as the army sent 100 rescuers to search for survivors of a landslide the storm caused in Matagalpa.

■ MIKE POMPEO has become the first US diplomat to visit an Israeli settlement in the occupied West Bank. The secretary of state visited Psagot Winery near Jerusalem after saying the US would brand the Israel boycott movement as anti-Semitic.

■ AN ISLAMIST leader has been jailed for ten years in Pakistan for two charges of financing terrorism. Hafiz Saeed, who was already in prison, is the founder of Lashkar-e-Taiba, the militant group blamed by the US and India for the 2008 Mumbai siege that killed 166.

■ RELATIVES of 12 Hong Kong pro-democracy protesters arrested at sea by China in August as they fled to Taiwan say letters from them praising their jail treatment are suspicious as they appear to follow a template.