HUMAN remains found in woods in Stevenage, Hertfordshire, could be those of missing student midwife Joy Morgan, 20 (above). Shohfah-El Israel, 40, was jailed for 17 years in August for her 2018 murder. Both worshipped at a church in Ilford, east London. He refused to say where he buried her.

MEGHAN and Harry joined William and Kate in a royal TV takeover last night to promote mental health. The royal fab four voiced a three-minute video in a primetime simulcast on Sky, Channel 4, ITV, Channel 5 and MTV for the NHS’s Every Mind Matters campaign. They have long campaigned on the issue and, in 2016, founded the Heads Together charity to end the stigma around mental health.

TROUBLED 1990s pop star Finley Quaye punched a bar manager and threatened to ‘get a grenade’ in a row after a gig. The 45-year-old, whose hits include Sunday Shining, also kicked a car and racially abused police after playing London’s Troubadour club on September 8, Westminster magistrates heard. Quaye, of Earl’s Court, west London, admitted assault and will be sentenced next Monday.

Nature-loving Putin takes in summit of a different sort 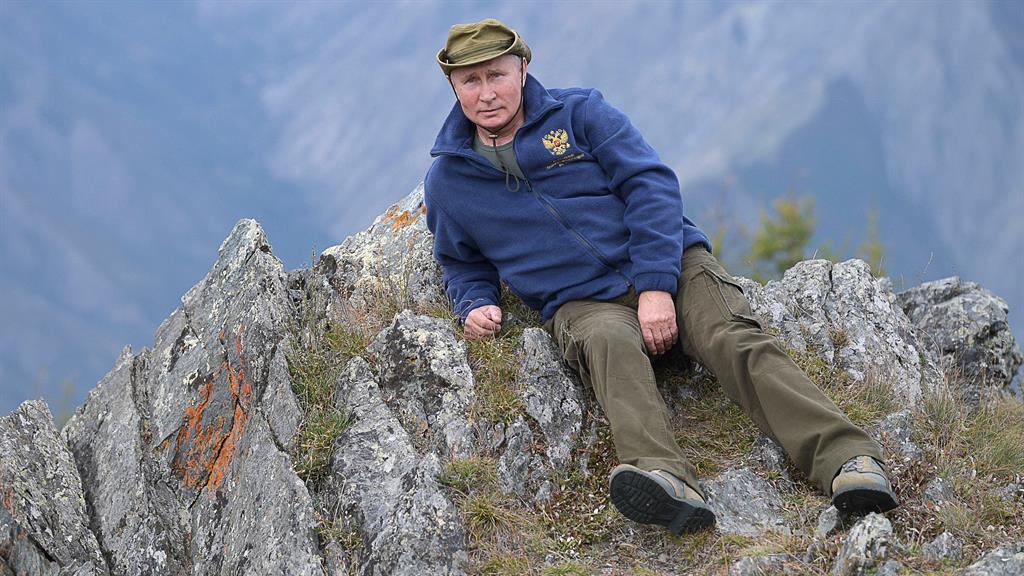 VLADIMIR PUTIN was pictured taking in the Siberian mountain air ahead of his 67th birthday yesterday. The Kremlin released these photos of the nature-loving Russian president in the Tuva region at the weekend. ‘Super,’ he said as he admired the view. ‘We are a bit higher than the clouds.’ 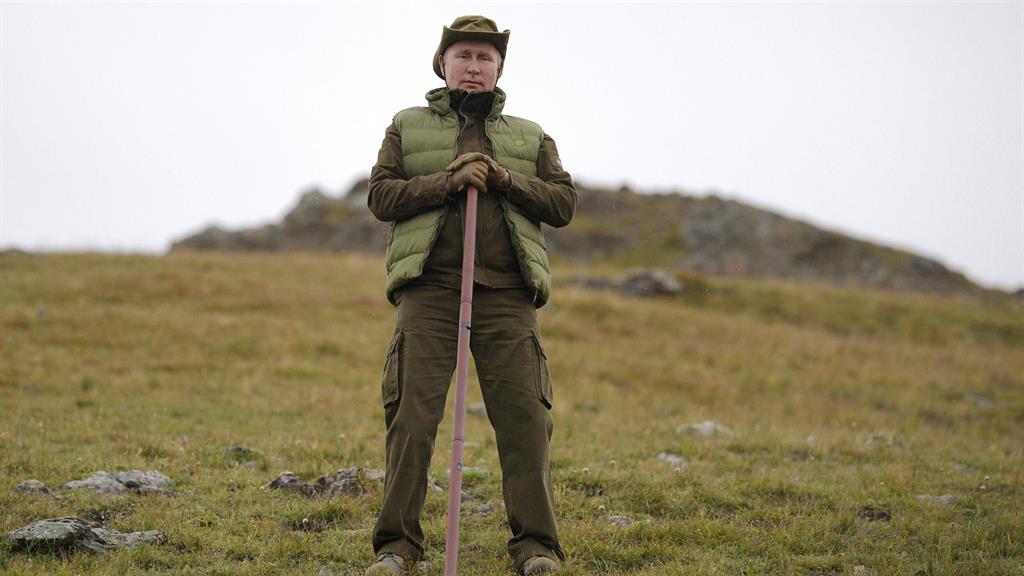 AN ARMY cadet trainer has been jailed for four years after posing as a 15-year-old girl to ‘bait’ 40 boys into performing sex acts online. Jamie Hopes, 24, of Maesteg, Mid Glamorgan, shared videos with other paedophiles. He pleaded guilty to 15 charges at Cardiff crown court.

Nazanin: It’s all right if you are Australian 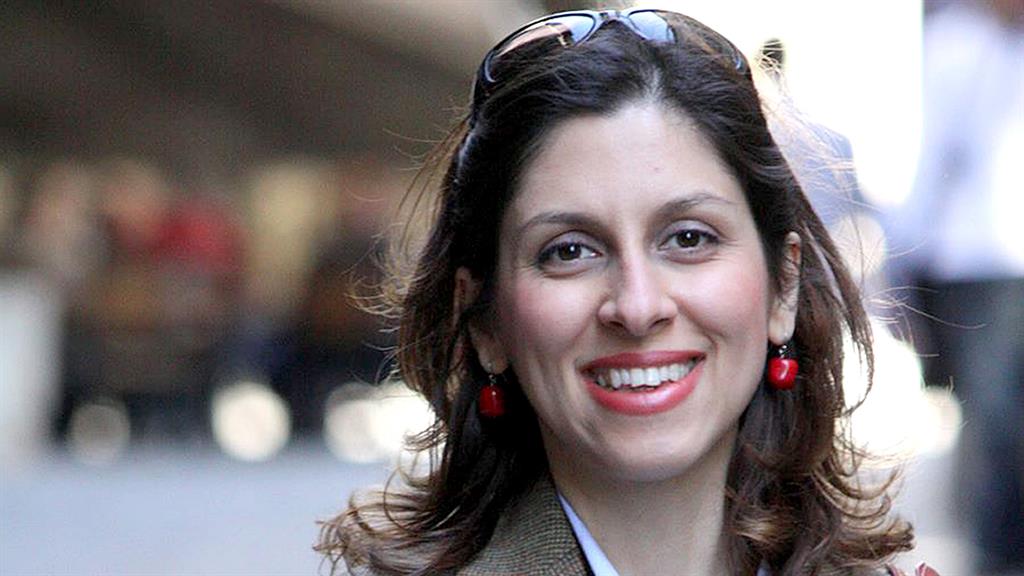 A BRITISH woman detained in Iran since 2016 has questioned how Australia can secure the release of two of its citizens held on spying charges in just a couple of months. Nazanin Zaghari-Ratcliffe’s husband Richard said he had to tell his wife (pictured), accused of plotting against Iran’s government, ‘I have no answer’. 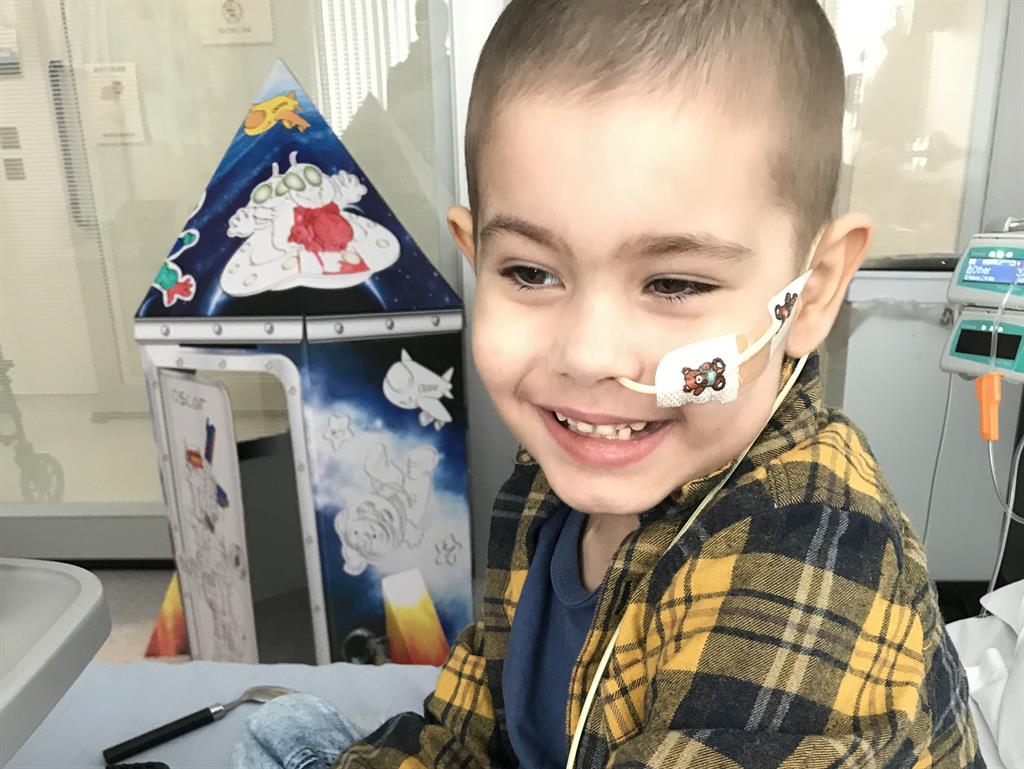 THE parents of a boy of five battling leukaemia have been left ‘gobsmacked’ after an appeal to pay for experimental treatment in Singapore raised £500,000. Oscar Saxelby-Lee (pictured), from Worcester, needs to go there for a CAR-T clinical trial following an NHS stem cell transplant in May that proved unsuccessful.

SOME police forces are failing to record thousands of serious crimes, inspectors have warned. West Mercia Police is not logging more than 8,900 reported offences a year, along with 4,200 reports of violent crime — or 12 per cent of the total. Inspector of Constabulary Wendy Williams said the force had actually improved but could do better. Essex Police is making ‘excellent progress’, the report said, although it is still failing to record about 6,700 crimes annually, plus 2,500 violent offences. The four-force study concluded North Yorkshire had shown ‘impressive’ improvement, while Warwickshire had also made positive strides since 2014.

Thomas Cook claims website crashes soon after it takes off

A WEBSITE for Thomas Cook customers to claim refunds for lost holidays opened yesterday — and quickly crashed. Users struggled to lodge applications and were shown error messages as they tried to input their details. The Civil Aviation Authority (CAA), which operates the website, apologised and said it had experienced ‘unprecedented demand’. It urged people to ‘try back again later’. The hitch came as the CAA’s final repatriation flight arrived at Manchester Airport from Florida. Union leader Manuel Cortes, of the Transport Salaried Staffs’ Assoc- iation, will meet with business committee chair Rachel Reeves on Monday to discuss the travel giant’s demise. 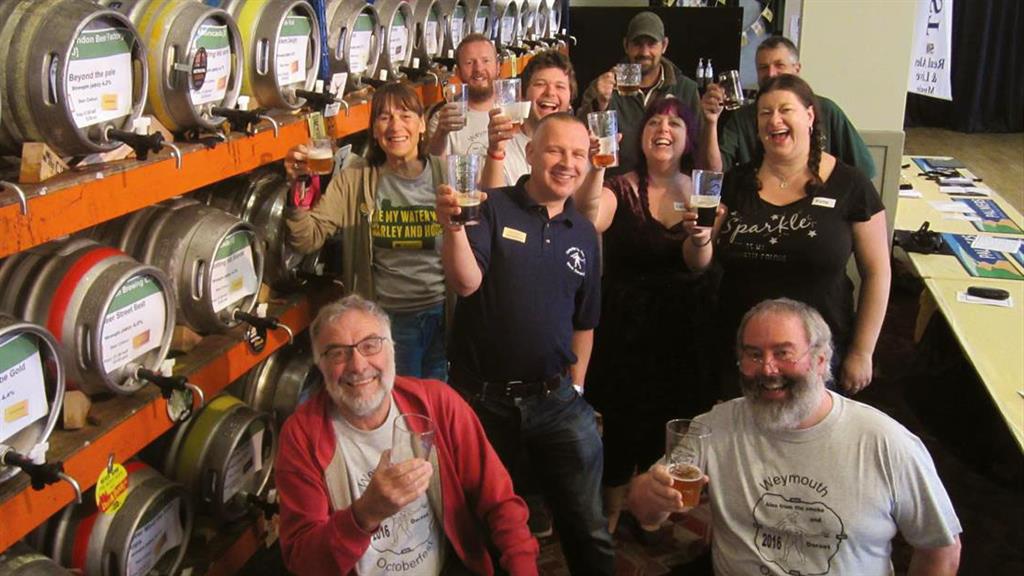 A REAL ale festival was branded the ‘worst ever’ by irate punters after it ran out of beer. The £11.50-a-head Weymouth Octoberfest ran dry three-and-a-half hours before it was to end on Saturday. Around 900 people drank 4,000 pints of beer and cider over two days. One posted: ‘Camra couldn’t organise a p*** up in a beer festival!’ The West Dorset branch of the Campaign for Real Ale said a request for more beer had been refused.

Pay up a fifth in a year amid recruitment drive

AVERAGE pay for new jobs rose by almost a fifth in a year and the number of advertised roles is up ten per cent, a study says. ‘Companies are showing their mettle in abnormal hiring conditions,’ said Lee Biggins, of CV-Library, which did the research. 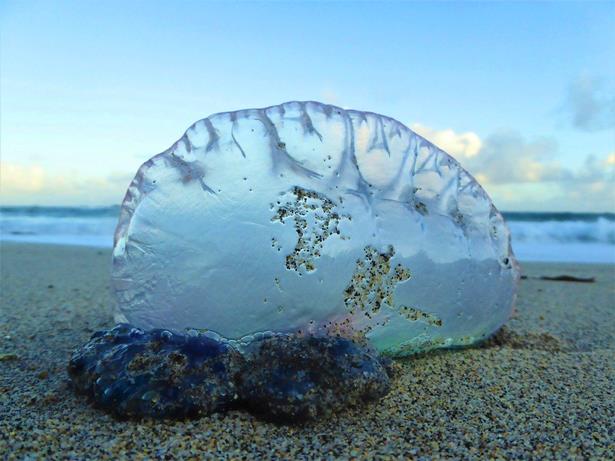 WITH its half-moon shape and crimped top, it looks like some sort of weird Cornish pasty. But you wouldn’t want to eat this or even touch it. It’s actually a Portuguese man o’ war. And three of them with stinging tentacles have washed up on the beach at Portheras Cove, near St Ives, Cornwall.

MICHELANGELO’S masterpieces from the Sistine Chapel will be displayed in Hull Minster from today. The Michelangelo — A Different View exhibition features more than 50 reproductions of the artist’s frescoes, including the Creation Of Adam. It runs until November 18. 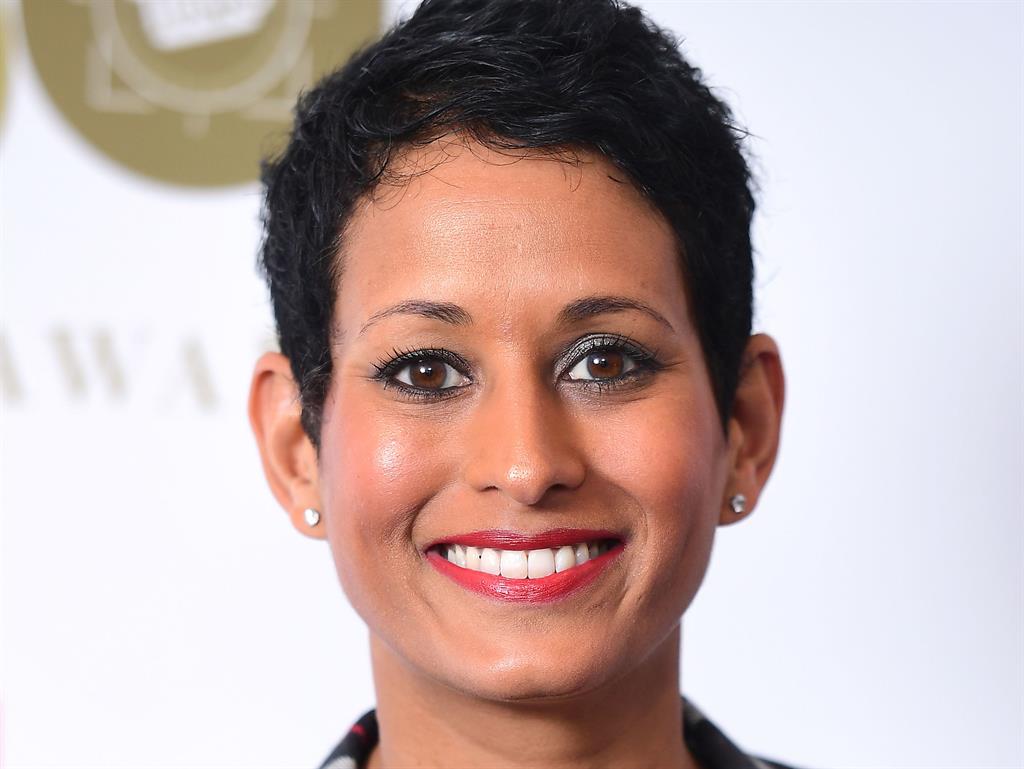 OFCOM has told the BBC to fix a ‘lack of transparency’ as ‘a matter of urgency’ after a row over Naga Munchetty’s comments when Donald Trump told female politicians to ‘go back’ where they came from. The watchdog found the BBC Breakfast presenter (pictured) was impartial and an investigation not justifiable. The BBC at first found her at fault but director-general Lord Hall reversed this.

A rare copy of the first Harry Potter book is set to sell for up to £30,000 at auction — after being kept in a briefcase for decades. The 1997 first edition, published with two errors, is one of only 500. It was gifted to a Lancashire family, who decided to sell it 20 years after locking it up for safekeeping.

A WINDRUSH generation immigrant with a heart condition did not die from the stress of trying to prove his right to remain in Britain despite living here for 50 years, a coroner has ruled. Dexter Bristol was eight when he arrived from the Caribbean in 1968, St Pancras coroners’ court heard. He died, aged 58, at his home in north London. There was a cry of ‘shame on you’ as coroner Mary Hassell concluded his death was due to ‘natural causes’.

■ TORY peer Lord Magan, 73, has received a one-week suspended jail term in a High Court battle over money with his estranged wife. A judge ruled he had failed to provide financial information.

■ YOUNG computer game addicts will be able to use Skype to access specialist NHS treatment. A team of professionals will accept referrals for young people aged 13 to 25.

■ IRISH former busker Dermot Kennedy, 27, looks set for a No.1 with his debut album. Without Fear is on course to unseat The Beatles’ Abbey Road, which topped last week’s chart 50 years after its original release.

■ TREATMENT to stop multiple sclerosis progressing could be ready in six years. Alternate-day fasting and the drug metformin — often given to diabetics — can restore cells to a ‘more youthful state’, research funded by the Multiple Sclerosis Society shows.

■ A MAN who died after running the Cardiff Half Marathon on Sunday was named as Nicholas Beckley. The council planner, 35, had a cardiac arrest on the finish line. He was ‘passionate about Cardiff’, his brother Andrew said.

■ A THREE-WEEK-OLD boy has died in hospital after he and his mother were stabbed in Wallsend, North Tyneside, last week. Following the incident, Denis Erdinch Beytula, 27, was charged with attempted murder. The mum, 21, is recovering.

■ A HUMPBACK whale has been spotted in the Thames in an extremely rare London sighting. It appears to be swimming as far upstream as Woolwich during high tide, then making its way further downstream during low tide.

■ DOZENS of fishermen from North Korea had to be rescued by Japan’s coast guard after their boat collided with an inspection vessel off the Noto Peninsula and sank. The Yamatotai fishing ground is known for its squid.

■ POLICE have been told to replace the army in Baghdad’s Sadr City, where violence erupted in clashes between troops and protesters. Iraqi PM Adel Abdul-Mahdi gave the order after more than 100 people died in six days of anti-government riots nationwide.

■ INDIA’S supreme court has ordered the state government of Maharashtra to halt felling more than 2,600 trees, pending a hearing. It comes after protesters invaded an area being cleared for a Mumbai metro line depot.

■ PORTUGAL’S Socialist leader Antonio Costa is set for four more years in government after his party won at least 106 of 230 seats in a general election. Ahead of talks with potential allies, he said: ‘Political stability is essential.’