A FANATICAL neo-Nazi couple who named their baby son Adolf in honour of Hitler have been jailed for membership of a terrorist group.

Adam Thomas and Claudia Patatas both had a ‘long history of violent, racist beliefs’, judge Melbourne Inman QC told them during sentencing.

Thomas, 22, was jailed for six years and six months for membership of banned far-right group National Action, while Patatas, 38, was given five years.

The Portuguese mum denied holding Nazi beliefs during her trial and said she thought Hitler’s actions were ‘horrible’.

But the judge told her: ‘You were equally as extreme as Thomas both in your views and actions.

‘You acted together in all you thought, said and did. In the naming of your son and the disturbing photographs of your child, surrounded by symbols of Nazism and the Ku Klux Klan.’

Ex-Amazon security guard Thomas and wedding photographer Patatas were found guilty by a jury after a seven-week trial at Birmingham crown court.

The couple had posed with baby Adolf and a swastika banner — while Thomas was pictured cradling him after dressing in Ku Klux Klan-style robes.

The dad — twice rejected by the Army — was also convicted of having a copy of The Anarchist Cookbook terror manual, which contains a bomb-making guide.

He and Patatas, who had swastika scatter cushions on the sofa at home in Banbury, Oxfordshire, wept and held hands as they were jailed. 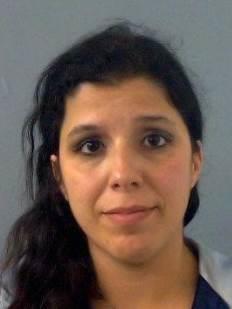 The judge said he had reduced the mum’s sentence from six years to five as an ‘act of mercy’ to shorten her separation from their one-year-old son.

The couple, who defaced war memorials with National Action stickers, were caught after sharing online posts with other extremists. They were among six members of their now-defunct terrorist cell to be jailed yesterday. Their close friend Darren Fletcher, from Wolverhampton, was given five years after admitting membership.

The Midlands-centred cell’s co-leader Daniel Bogunovic, 27, of Leicester, got six years and four months after being convicted of membership.

And the group’s ‘security enforcer’ Nathan Pryke, 26, of March, Cambridgeshire, got five years and five months after admitting membership.

Fletcher, 28, had taught his daughter to give a Nazi salute and sent a message to Patatas saying ‘finally got her to do it’.

The judge said the views that were expressed were extreme ‘even by the group’s standards’, adding: ‘On your own evidence, you have been seeking to indoctrinate your own child in these vile beliefs.’