SIR KEIR STARMER has dismissed calls by Labour left-wingers to reinstate Rebecca Long-Bailey after she was sacked for sharing an article online containing an allegedly anti-Semitic conspiracy theory.

Members of the Campaign group of MPs held a conference call with the Labour leader to protest against Ms Long-Bailey’s dismissal as shadow education secretary.

But while they said the discussion had taken place in a ‘mutually respectful manner’, they made clear Sir Keir had stuck to his guns, saying there had been a ‘significant disagreement’ between them.

The Labour leader’s office declined to comment on the talks, saying it had been a private meeting.

Ms Long-Bailey (above) was fired yesterday after refusing to take down a tweet linking to an interview with actress Maxine Peake in which she claimed police linked to the death of George Floyd in the US had learned their tactics from the Israeli secret services.

Sir Keir said he had acted in order to rebuild trust with the Jewish community after years in which Labour has been embroiled in allegations of anti-Semitism under his predecessor, Jeremy Corbyn.

However, the move infuriated left-wing allies of the former leader, including ex-shadow chancellor John McDonnell, who rejected claims that Ms Peake’s comments were anti-Semitic and said he stood ‘in solidarity’ with Ms Long-Bailey.

In a statement following its meeting with Sir Keir, the Campaign group said it had also raised the issue of the freedom of party members to speak out on Israel.

‘On the sacking of Rebecca Long-Bailey from the shadow cabinet, it was clear that significant disagreement remains on this point,’ the statement said.

‘The Socialist Campaign Group of Labour MPs made it clear that Rebecca Long-Bailey should not have been sacked and should be reinstated,’ it went on.

‘The imminent annexation of the West Bank by Israel’s government was discussed and the need for the Labour Party, MPs, party members and supporters to speak out against Israel’s illegal annexation and ongoing human rights abuses by the government of Israel was raised.

‘This was a businesslike exchange of views which took place in a mutually respectful manner.’

Following Ms Long-Bailey’s dismissal, Ms Peake acknowledged her comments in an interview with The Independent had been ‘inaccurate’.

The former shadow education secretary, however, insisted it was not ‘racist or anti-Semitic’ to draw attention to concerns about police tactics. 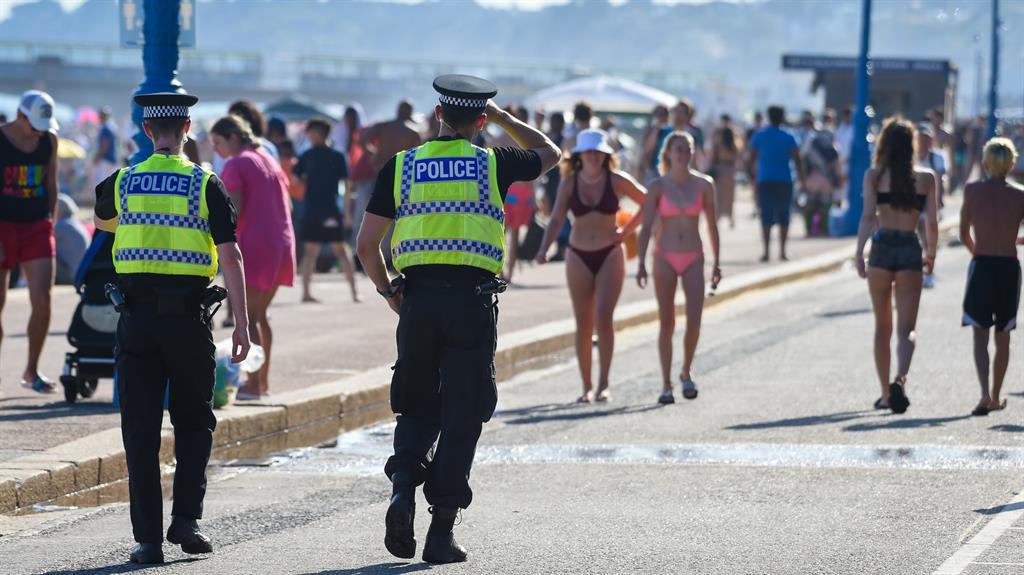 BORIS JOHNSON has warned people against ‘taking liberties’ with social distancing rules as he said it could lead to the danger of a ‘serious spike’ in coronavirus infections.

It came after health secretary Matt Hancock said the government would take action if distancing measures were ignored as thousands flocked to the south coast on the hottest day of the year yesterday.

The PM said: ‘If you look at what’s happening elsewhere in the world where people have been coming out of lockdown, I’m afraid what you’re also seeing is people taking too many liberties with the guidance, mingling too much, not observing social distancing.

‘So in some parts of the world — I won’t name them — you have got spikes, really serious spikes, in the instance of the disease, so it is crucial that people understand that on July 4 [easing of lockdown] we get this right, we do this in a balanced way.’

Despite Mr Hancock’s warning of possible beach closures, Downing Street signalled such a move would be a matter for local authorities.

Bournemouth, Christchurch and Poole Council has declared a major incident after services were ‘completely overstretched’ as huge numbers of visitors crowded onto the beaches yesterday.

He tweeted: ‘If we do not follow social distancing guidance then cases will rise again.

‘Naturally people will want to enjoy the sun but we need to do so in a way that is safe for all.’

Mr Hancock told TalkRadio he was ‘reluctant’ to go down the route of shutting public spaces as ‘people have had a pretty tough lockdown’.

But he insisted if there was a spike in cases ‘then we will take action’. 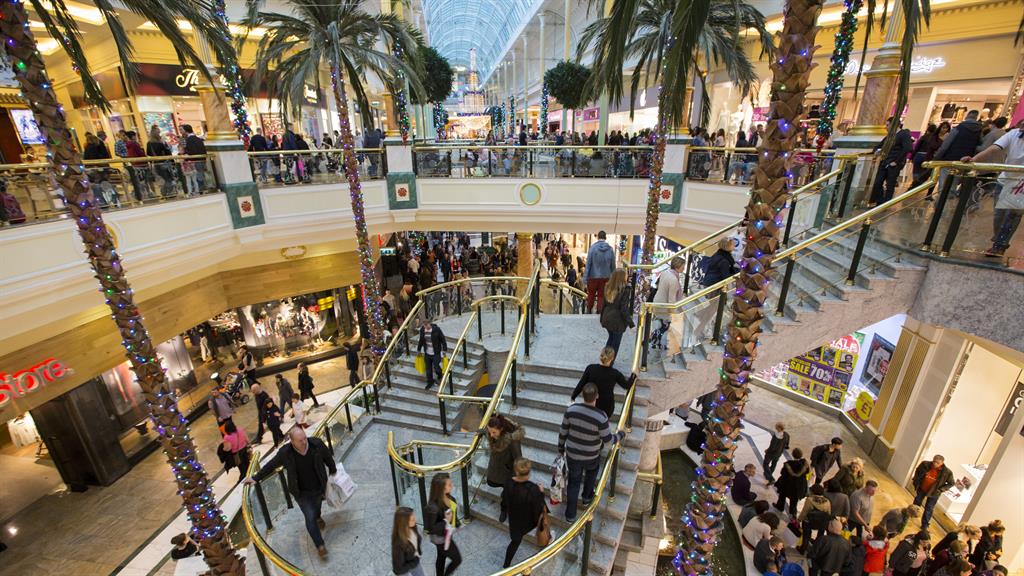 INTU, owner of Manchester’s Trafford Centre (above), has gone into administration after failed crunch talks with lenders.

The shopping centres owner said it had applied to appoint administrators from KPMG, after warning earlier today that it was on the verge of collapse.

The confirmation came minutes after the London Stock Exchange suspended shares in the listed firm.

However, the company said sites would continue to trade for the time being despite its insolvency.

Intu, which also runs Lakeside in Essex, had been in a desperate scramble to agree a ‘standstill’ on loan agreements.

Earlier today the group said it was likely to appoint administrators as it remained unable to agree the terms of such a deal with creditors.

In a statement, the group, which had until midnight today to reach a deal, said ‘insufficient alignment and agreement has been achieved’.

Earlier this week, Intu said it had put the administrators from KPMG on stand-by as it looked to secure a deal ahead of the midnight deadline on loan covenants.

The group has struggled under a £4.5billion debt burden for the past year, but has been hammered by significantly lower rent payments from retail tenants since the coronavirus outbreak.

Intu employs about 3,000 staff across the UK, while a further 102,000 work for stores in its shopping centres.

It warned on Tuesday that its malls may be forced to shut if it was unable to secure the standstill agreement. 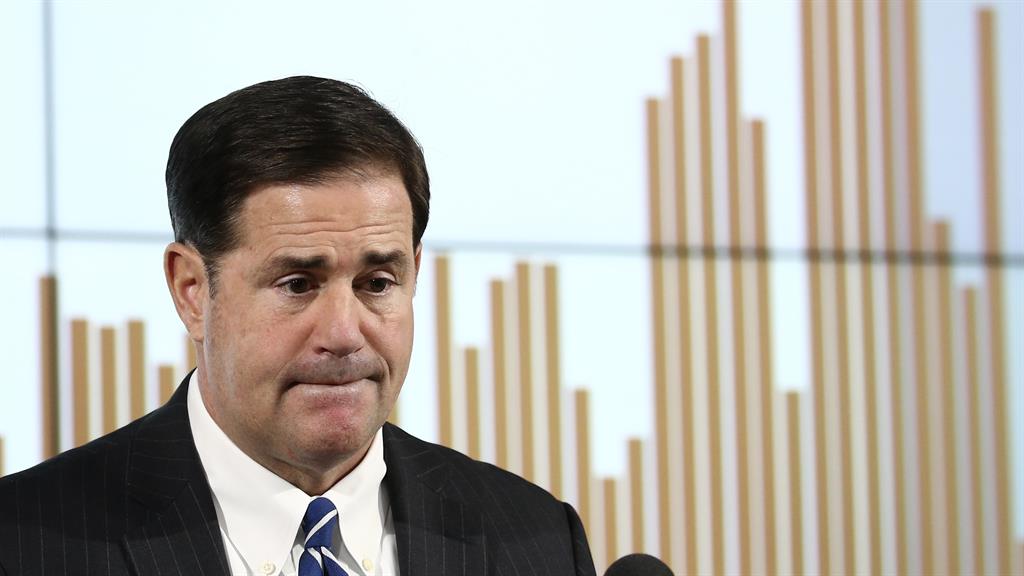 The number of confirmed new coronavirus cases per day in the US has hit an all-time high of 40,000 — eclipsing the mark set during one of the deadliest stretches in late April.

The figure represents a resurgence that has led some governors to backtrack or at least pause the reopening of their states.

The numbers ‘continue to go in the wrong direction’, said Arizona’s Republican governor Doug Ducey (above).

While the increase is believed to reflect, in part, greatly expanded testing, experts say there is ample evidence the virus is making a comeback, including rising deaths and hospitalisations in parts of the country, especially in the south and west.

Arizona, Texas and Florida are among the states that have been hit hard.

The number of confirmed infections soared past the previous high set on April 24 of 36,400, according to the count kept by Johns Hopkins University.

Deaths from the coronavirus in the US are down to around 600 per day, compared with about 2,200 in mid-April.

Some experts have expressed doubt that deaths will return to that level, in part because of advances in treatment and prevention but also because a large share of the new infections is in younger adults, who are more likely than older ones to survive.

The virus is blamed for 124,000 deaths in the US and 2.4million confirmed infections nationwide, by Johns Hopkins’ count.

But US health officials say the true number of Americans infected is about 20million, or almost ten times higher.