THE UK’s coronavirus death toll has passed 50,000 as Boris Johnson was accused of presiding over a Government that lacked the ‘trust and confidence’ of the British people.

The prime minister defended NHS England’s test and trace system — one of the key measures introduced to help the return to something approaching normality — but promised to increase the speed with which concerned people get the results of coronavirus tests.

The Commons clashes came as the grim milestone of 50,000 deaths linked to Covid-19 was passed, according to analysis of official figures by the Press Association.

The prime minister defended his handling of the crisis, telling MPs: ‘I take full responsibility for everything this Government has been doing in tackling coronavirus and I’m very proud of our record.’

Sir Keir said there had been a ‘loss of trust’ in Mr Johnson’s administration and claimed the prime minister had refused an offer to work together on building a consensus on the reopening of England’s schools.

Mr Johnson said Sir Keir had not offered ‘any dissent’ during a private phone call about the Government’s approach and questioned the purpose of his ‘endless attacks’ on the official response to the crisis.

In response to claims that the test and trace system was weeks away from being fully operational, Mr Johnson said it was working — but stopped short of giving figures to back up his claim.

He said ‘thousands’ of contacts of people who had tested positive for coronavirus had been traced.

In response to pressure from former health secretary Jeremy Hunt, Mr Johnson set a target of test results being turned around in 24 hours by the end of the month.

Some 90 per cent of tests are returned within 48 hours and Mr Johnson said that he would get ‘all tests turned around in 24 hours by the end of June’ apart from instances where there were postal or other problems.

The speed of getting results is critical to the operation of the test and trace system, which relies on identifying people who have been in contact with a positive case and getting them to self-isolate.

The total number of fixed penalty notices (FPNs) handed out by the Metropolitan Police between March 27 and May 14 was almost a fifth higher for those from non-white communities.

While people from Asian, black, mixed and other backgrounds make up around four in 10 of the capital’s population, according to Office for National Statistics data, they account for more than half of the fines and arrests for alleged breaches of Covid-19 legislation.

Asian people, who account for 18 per cent of London’s population, were handed 23 per cent of fines and were subject to 14 per cent of arrests.

But the Met said the reasons ‘are likely to be complex and reflect a range of factors’, adding: ‘This includes interactions between the areas subject to significant proactive policing activity targeting crime hot-spots and both the variation in the age-profile and geographical distribution of ethnic groups in London.’

Former chief superintendent Owen West said racism was a potential factor in the number of fines handed out to BAME people.

‘We have a real issue in the UK around the disproportionate effect of police powers and coercion in the UK,’ the retired officer told BBC Five Live.

Asked if racism has played a part in the giving out of fines, he said: ‘There is a potential for that, and we have to confront it.

Met Commissioner Dame Cressida Dick said officers had taken enforcement action in a ‘very, very low’ number of cases among ‘millions of encounters’ between officers and members of the public.

But she said she did not see the data as ‘extremely surprising’ with any apparent disproportionality in line with other trends.

She told the London Assembly police and crime committee: ‘Nobody is happy, for example, that our black and minority ethnic friends, family and colleagues are subject to far higher levels of victimisation.

‘Nobody is happy that there are lots of differences in society in that way.’

Rosalind Comyn, policy and campaigns officer at human rights group Liberty, said: ‘These figures reflect the unjust reality that affected communities are well aware of, even when lockdown is not in place.

‘In the short term the government needs to create a right to appeal these fines; in the long term they need to listen to those most affected by overbearing policing and take meaningful steps to address long-standing disparities in the way we are policed.’

■ Mistakes were made, admits architect of Sweden’s Covid-19 response 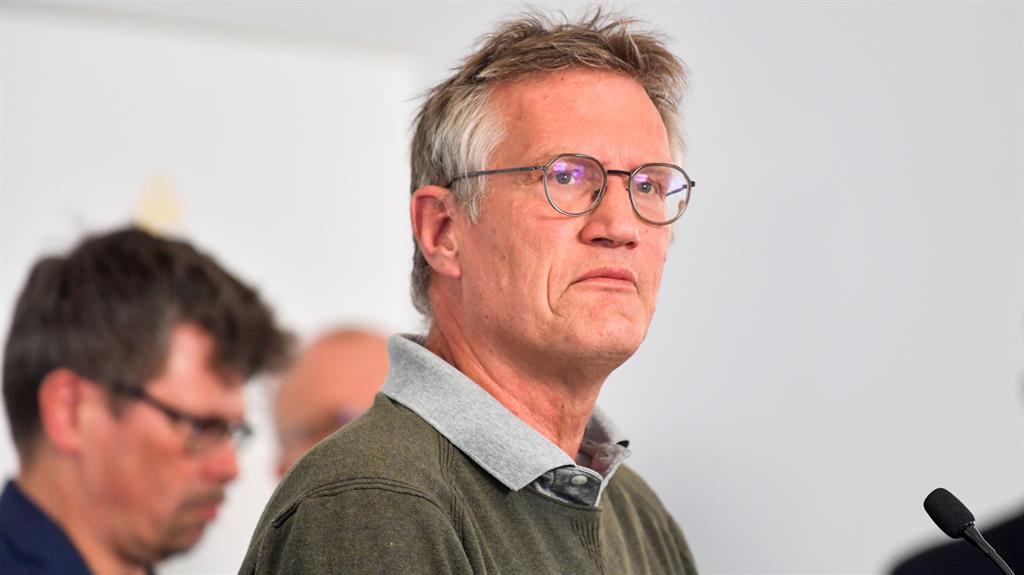 SWEDEN’S chief epidemiologist showed contrition as criticism mounted over the Scandinavian country’s hotly debated method of fighting Covid-19, which has resulted in one of the highest death rates per capita in the world.

Sweden has stood out among European nations and the world for the way it has handled the pandemic — by not shutting down the country or the economy like others but relying on citizens’ sense of civic duty.

Swedish authorities have advised people to practice social distancing, but schools, bars and restaurants have been kept open the entire time.

Only gatherings of more than 50 people have been banned.

‘I think there is potential for improvement in what we have done in Sweden, quite clearly,’ Anders Tegnell (pictured) of the Public Health Agency told Swedish radio.

Sweden, a nation of 10.2million people, has seen 4,468 deaths linked to Covid-19, which is far more than its Nordic neighbours and one of the highest death rates per capita in the world.

Denmark has had 580 coronavirus deaths, Finland has seen 320 and Norway has had 237, according to a tally by Johns Hopkins University.

‘If we were to encounter the same disease again, knowing precisely what we know about it today, I think we would settle on doing something in between what Sweden did and what the rest of the world has done,’ said Mr Tegnell, who is considered to be the architect of the unique Swedish pandemic approach.

Authorities in Sweden, including Mr Tegnell, have been criticised and have apologised for failing to protect the country’s elderly and nursing home residents.

But Mr Tegnell said today it was still unclear what the country should have done differently.

He also said other nations are unable to tell exactly what measures affected the outcome of their outbreaks because they threw everything at it in one go.

Last week, the country’s former state epidemiologist, Annika Linde, said that in retrospect she believes an early lockdown could have saved lives, while political pressure has forced the government to bring forward an investigation into the handling of the crisis.

The moves recommended by Mr Tegnell have made Sweden a bit of a local pariah and did not spare the Swedish economy.

More than 76,000 people have been made redundant since the outbreak began and unemployment, which now stands at 7.9 per cent, is expected to climb higher.

Finance minister Magdalena Andersson has said Sweden’s economy, which relies heavily on exports, will shrink 7 per cent in 2020 and the Scandinavian country was headed for ‘a very deep economic crisis’.

Last week, neighbouring Norway and Denmark said they were dropping mutual border controls but would keep Sweden out of a Nordic ‘travel bubble’.

CORONAVIRUS has infected more than six million people across the world and killed more than 370,000, according to a tally kept by Johns Hopkins University.

Tanzania is entering its sixth week without an update on its coronavirus cases, causing African health authorities to worry and the US to issue a new statement of concern.

The East African nation’s data has been frozen at just more than 500 cases since the end of April as the government of President John Magufuli claims the virus has been defeated.

The opposition, however, has alleged that Tanzania’s cases could be in the tens of thousands

Meanwhile, a city in central Germany has closed its schools for the rest of the week and is testing hundreds of people in a residential complex after 80 coronavirus infections were linked to private events marking the end of Ramadan.

News agency dpa reported that the school closures are due to the infected including 24 children.

Germany started easing coronavirus restrictions in late April and is continuing to do so despite some concern over various local outbreaks.

In Wuhan, the Chinese city where the pandemic is believed to have originated, nearly all of its 11 million citizens have been tested for coronavirus in a mass effort that resulted in the isolation of just 300 people, authorities said.

The testing effort carried out in the second half of May targeted every resident not already tested and excluded only children under six.

In Australia, the pandemic has pushed the economy into recession for the first time in 29 years.

Federal Treasurer Josh Frydenberg said the current June quarter will be the second in a row in which the Australian economy has shrunk. A recession is defined as at least two successive quarters of contraction.

Finally, the South Korean government has pushed ahead with a phased reopening of schools, which began on May 20, despite a reported 49 new cases of Covid-19.

The figures brought national totals to 11,590 cases and 273 deaths. All but one of the new cases were reported from the densely populated Seoul metropolitan area, leading mayors and governors in the greater capital area to shut thousands of nightclubs, hostess bars, karaoke rooms, churches and wedding halls.