THE government has scaled up its public health messaging with a series of striking adverts warning the public ‘people will die’ if they don’t stay home during the coronavirus lockdown.

Full-page adverts featuring the new messaging — including the slogan ‘Stay home. Protect the NHS. Save lives’ — have been placed in most national newspapers, while social media users have also been targeted with the advertising across a variety of platforms.

The new campaign takes a far stronger tone than any produced by the government before, using striking red and yellow colouring and featuring dramatic images of NHS staff in face masks and other protective wear.

In one example, promoted on Facebook, users are told: ‘If you go out, you can spread it. People will die.’

Another warns: ‘Anyone can get it. Anyone can spread it.’ 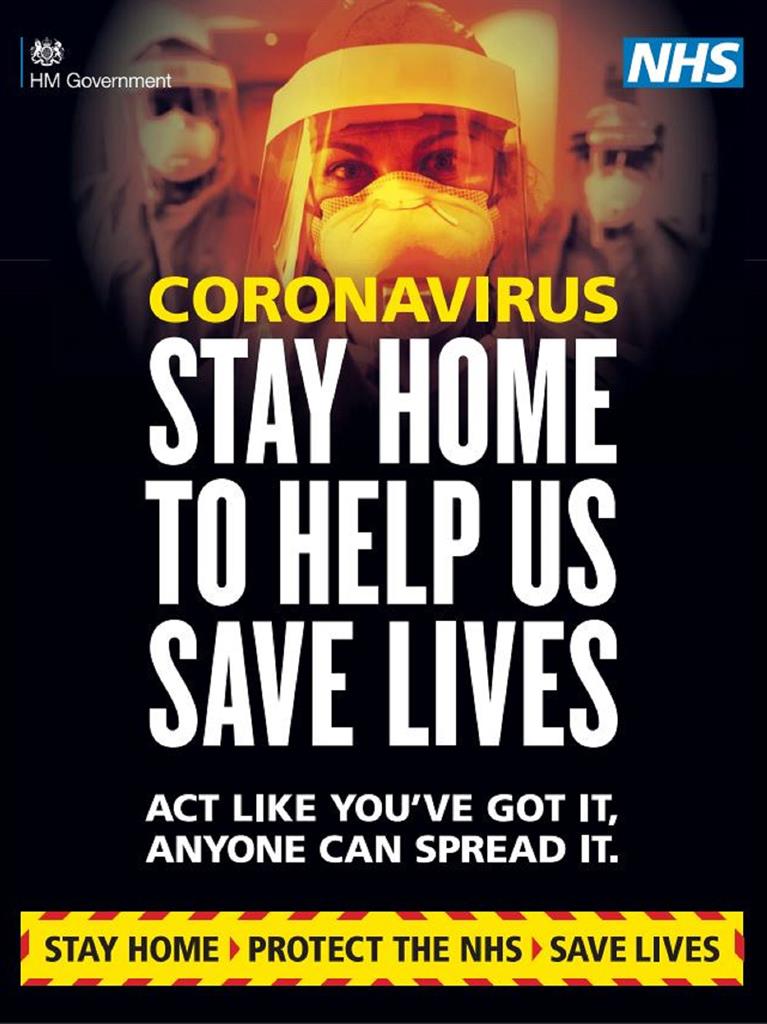 Louis Hill, a public relations expert and managing director of The Source PR, said the government was ‘learning from their mistakes’ in terms of its communications strategy.

‘I believe that the government has noted that their earlier tactics were not successful, and has now moved to more open, transparent, and if you like — firmer — comms.

‘The announcement of a lockdown was unlike anything our generation has ever seen. The messaging from the government was clear and concise: you must not leave your home.

‘Before this, using words such as ‘we advise’ and ‘we suggest’ meant that many did not feel inclined to follow the rules,’ he added.

Downing Street, and prime minister Boris Johnson in particular, had previously faced criticism for communications from ministers and official government channels in the early stages of the outbreak.

Ministers were accused of failing to act quickly enough to prevent the spread of the virus, initially saying it was not necessary to cancel mass gatherings such as football matches and concerts.

The new push comes after Number 10 confirmed the appointment of the Conservatives’ party campaign chief Isaac Levido to aid its communications around the Covid-19 crisis.

It has also been reported that Downing Street has hired Topham Guerin, the creative agency responsible for the Conservatives’ social media strategy during last year’s successful general election campaign.

■ Government to ramp up Covid-19 testing

THE government is to ramp up testing for Covid-19 after Boris Johnson said it was the key to ‘unlock the coronavirus puzzle’.

Downing Street said health secretary Matt Hancock would be setting out plans for a ‘significant increase’ amid criticism the UK has been lagging behind other countries.

The prime minister’s official spokesman said the government had finally reached its target of 10,000 tests a day, with 10,412 carried out on Tuesday in NHS and Public Health England (PHE) laboratories across the UK.

The spokesman said the total number of NHS staff to be tested at drive-through facilities had now risen to 2,800, although ‘significant numbers’ had also been tested at NHS and PHE labs.

He said that they were working on a number of measures that would enable ‘hundreds of thousands’ of tests to be carried out each day.

‘We acknowledge that more needs to be done in relation to testing. We need to be testing more people and we need to be making progress very quickly,’ he said.

Testing NHS staff is seen as vital as the epidemic approaches its peak, potentially enabling thousands of staff, who are self-isolating because they or their family members have shown symptoms, to return to work once they are shown to be clear of the disease.

The prime minister’s spokesman said that following complaints of shortages, the NHS had developed a new specification for the swabs used to carry out the tests, which had been validated and shared with potential manufacturers.

‘We think that provides us with a way forward to complete hundreds of thousands of tests,’ he said.

Following the opening of a large-scale testing laboratory in Milton Keynes in just a week, the spokesman said two more would be opening next week in Cheshire and Glasgow to cover the north of England and Scotland.

At the same time, the government was working with nine potential suppliers on developing an antibody test, which would show whether people have had the virus and is seen a key to lifting the lockdown.

But the spokesman said it was essential that they were accurate as other countries had introduced antibody tests that were not, with ‘significant adverse consequences’.

■ District councils warn about ‘wave of waste’ from lockdown households 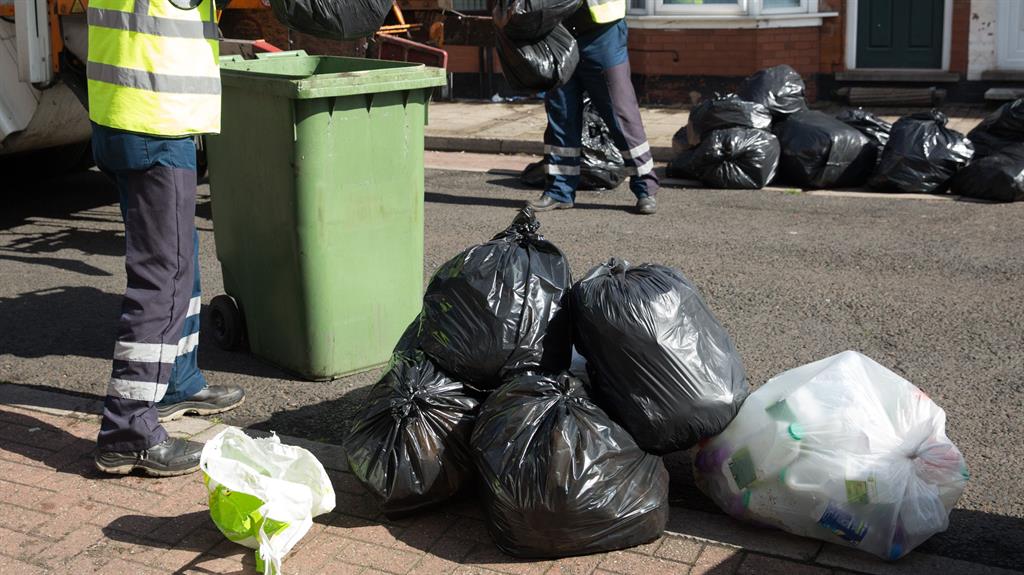 A ‘WAVE of waste’ will emerge from households in lockdown in the coming weeks, district councils have warned.

The District Councils’ Network (DCN) is urging people to think twice about how much waste is being put out — and not to burn it on bonfires.

Families are generating more waste and recycling while they obey government orders to stay at home to help curb the coronavirus pandemic.

In some cases extra waste is coming from households that have stocked up on food and other goods they need, the DCN says.

At the same time many town halls have had to reduce some rubbish and recycling collections, such as garden waste, as staff need to self-isolate or to recover from illness, and have closed recycling centres or dumps.

The network, which represents 191 district councils in England, wants residents to work with their local authority to best manage the perfect storm of swelling amounts of waste and challenges in collecting it.

While many people will be using the current period as an opportunity to spring clean their home or do gardening, the DCN is asking residents to consider how they can store waste or have it safely collected at the moment.

District councils are asking residents to:

■ Contact your council to see if they are still operating paid for bulky waste collection. Private companies offer this as well but you must check they are properly registered for handling waste by the Environment Agency

■ Try and compost any garden waste at home

■ Store any excess waste from DIY projects, spring cleans or garden waste at home until it can be disposed of safely and legally.

The DCN is also warning against burning rubbish, especially hazardous waste, on bonfires, which can contribute to air pollution.

■ TV magician Dynamo reveals he has coronavirus with ‘quite severe’ symptoms 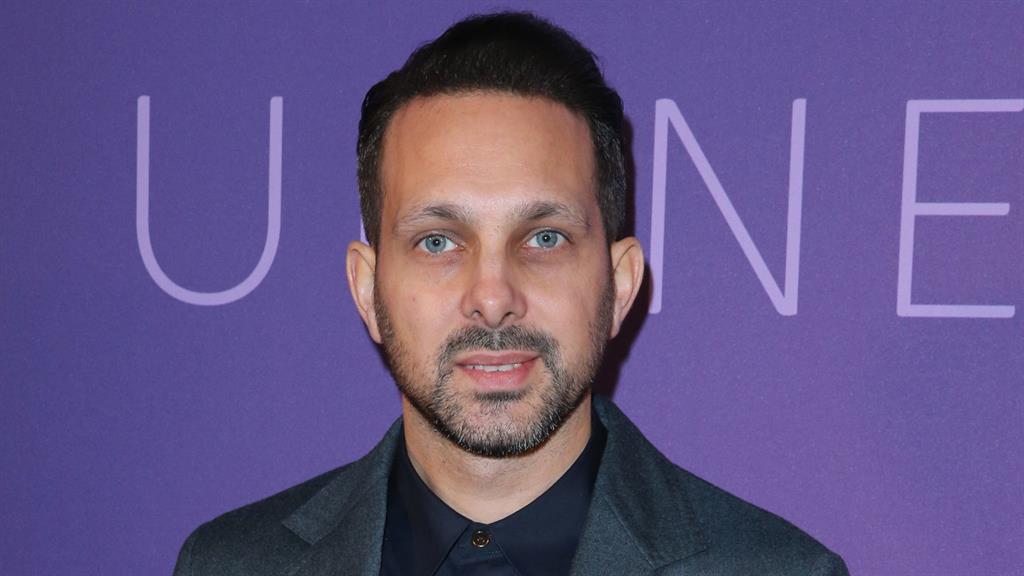 DYNAMO has revealed that he has contracted Covid-19 and is at ‘high risk’ from the disease because of his underlying health conditions.

The TV magician (pictured) said it had been a ‘rough couple of weeks’ while he battled the illness and his symptoms have been ‘quite severe’.

He told fans in an Instagram video that he had caught coronavirus, but his condition was now improving.

He said: ‘Over the last few weeks I have experienced symptoms such as a persistent cough and lots of aches and pains.

‘I self-isolated for just over two weeks and took any necessary precautions.

‘I was advised to take a private test. Now I appreciate this is not possibly for everyone.’

He said that because of his ‘existing health issues’ he is at high risk from the Covid-19 virus, adding that he is receiving immunosuppressive therapy.

‘Although I haven’t had a fever, my symptoms have been quite severe,’ he added.

Dynamo added that Covid-19 ‘can effect anyone, it doesn’t discriminate’.

He urged people to ‘stay at home and keep away from others’ and also praised the country’s key workers and healthcare staff.

Dynamo was diagnosed with Crohn’s disease in his teens and recently had to take a two-year career break because of health issues.