DAME Esther Rantzen has spent her life dealing with dodgy tradesmen and on-the-blink washing machines — so she should know a thing or two about houses. Esther, 79, grew up in London and is best known for decades of work on TV in consumer programmes, including That’s Life! which ran for 21 years until 1994, and Esther Rantzen’s House Trap on Channel 5. Aside from TV work, Esther founded charity Childline, a counselling service for children and young people, and Silverline, a similar service for older people living with isolation and loneliness.

It was in 1969 and I was 29. I had lived at home in Cricklewood with my parents until then. I was unusual, all my friends had moved into flat shares in their late teens, but my family enjoyed each other’s company, principally because we made each other laugh. I do remember my occasional boyfriends being traumatised by my mother’s habit of coming out of the bath and walking around the house stark naked with the towels clutched to her front to cover her modesty. No wonder I have moments of naturism! Anyway, the flat was a tiny two-bedroomer in Hammersmith with a river view, and I loved it. My dear friend and colleague John Pitman bought a flat in the next door block, which was fun.

What attracted you to the property?

It was the view. Tiny and new as the flat was, I spent my time looking out of the windows. Since then, I have lived in a couple of perfectly nice houses in suburban streets with only a view of the house opposite, and it makes me very claustrophobic. My current flat is like an eagle’s nest, with a view across West London.

What stage were you at with your career?

I had just started my career as a TV presenter, working on a BBC consumer programme called Braden’s Week starring the wonderful Canadian actor, Bernard Braden. Beside me behind the desk was my neighbour, John Pitman, who had such a lugubrious face and voice he made everyone laugh — especially me.

The only nasty surprise was the huge phone bill my flatmate ran up — this was in the days of landlines — and the flasher who jumped out one night and frightened me.

What did you learn from presenting consumer programmes?

The only thing I have learnt is that you must have any potential home professionally surveyed. Recently, I nearly bought a flat, which turned out to have a lake under the floorboards due to an undiagnosed leak. That had been missed by the mortgage valuer. Thank heavens my surveyor brought in a damp meter that went off the scale.

Did you sell it?

I moved with a man to a house on a quay. The man was an excellent idea, thanks to him I got pregnant and married. But I was conflicted, I remember saying to him on the morning of our wedding, ‘Desmond, I am only 37, we have only known each other ten years, and I am only eight months pregnant, we’re rushing this.’ Fortunately he paid no attention, we were married for 23 years until he died in 2000. But I have very happy memories of that house; our bedroom had a balcony filled with spring bulbs and primulas, and a tiny garden which my friend Cyril Fletcher designed for me.

I approve of young people living with their parents, we aren’t good at living alone. So don’t move until you have to. But property is still the best investment I ever made. And never believe the internet, conmen write their own rave reviews. Take personal recommendations and, if possible, inspect their work. 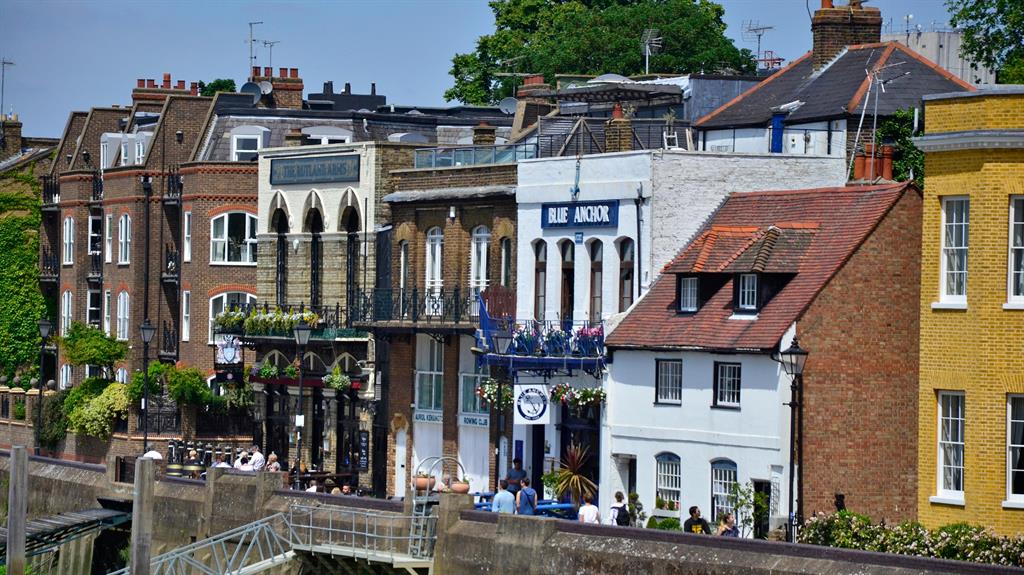 NESTLED on the River Thames, Hammersmith is a busy, lively place that isn’t quite as refined as nearby Chiswick and Putney, but is arguably better connected and has even more food and drinking options. A short bike from central London, it has some great live music venues and oodles of nice riverside pubs on its doorstep along with some great shopping options nearby such as Shepherds Bush’s Westfield shopping centre. Much of the property options are new developments and gorgeous Victorian and Georgian homes. Hammersmith has an overall average price of £918,374. rightmove.co.uk