WE’VE all been there. It’s nearing payday, and we are eagerly waiting for our money to arrive. Then we take a look at the bank balance — and it’s near zero again. Where’s it all gone?

Sometimes, it is hard to work out why there is so much month left over at the end of the money, especially since we can barely remember going out and spending anything.

Taking control of our finances means understanding what we spend, and then — if we need to — working out how we can reduce it. A look at the nation’s spending habits can help to shed some light on what is really going on in our bank accounts, and how we can make them healthier even in these difficult times.

How Britain spends it

The gold standard statistics for Britain’s money management come from the Office for National Statistics (ONS). Its Family Spending In The UK report shows average weekly household expenditure and its figures are used to calculate the rate of inflation using an ‘average’ basket of goods that used to include wild rabbit and a mangle, and now includes cocktails in cans and university tuition fees.

The ONS also provides separate figures showing how much we spend on housing, since mortgage payments aren’t included in the spending report but rent payments are. The latest Family Spending figures run to March last year, and show that the average family spends £585.60 a week, with 13 per cent spent on recreation and culture, 11 per cent on food and 14 per cent on household bills including rent for those who do rent a property.

Lower income households spend a much larger percentage of their money on housing and food. If you are the bottom ten per cent of the population when it comes to household income, almost half (42 per cent) of what you spend per week will be on food and housing, but it will be only a quarter (26 per cent) if you are in the top ten per cent. And the top ten per cent of the population has more cash left over for the fun stuff, spending five times as much on recreation and culture than those in the bottom decile.

These figures are accurate, but given the impact of Covid-19 on everyone’s spending patterns, they are likely to be out of date in many cases. With shops shut for months, and restaurants and bars only just getting back into the swing of things, many of us will have found our spending patterns changing dramatically.

Figures from Barclaycard, which has been logging our spending patterns since Covid hit, show that trends in our spending have changed several times during lockdown and its subsequent easing. In April, the height of lockdown, spending dropped 37 per cent compared with the same time the previous year, although we upped our spending in supermarkets, specialist food stores and in online DIY stores.

By July, we were only spending 2.6 per cent less than the previous year, and we’d started spending on non-essential items again, particularly in sports and outdoor shops and at the hairdresser.

‘Consumer spending has warmed up alongside the weather, as Brits return to the shops for non-essential items,’ says Barclays director Esme Harwood. ‘However, a sense of cautiousness still prevails. While some consumers feel more comfortable returning to shops, others are still wary of taking public transport and travelling outside the UK, with fears and uncertainties lingering about returning to normality too quickly.’

The biggest drains on our purses

While some spending is unavoidable, whether we are in lockdown or not, Covid has taught us it is possible to make significant savings. Figures from Hargreaves Lansdown found that we’d saved, on average, £581 since June — with older people most likely to cut back and most planning to save the extra for a rainy day.

So where have the biggest savings come from and will they continue? Holidays have been one major saving, with 56 per cent telling Barclays that they were planning to spend less, and we’re also spending more than 50 per cent less on eating and drinking overall, despite our larger supermarket bills. Transport to work is down, too, of course, and many people will no doubt reassess whether daily commuting is necessary if, and when, normal returns.

Figures from a survey by Topcashback found that we are spending more on groceries, household bills, DIY and gardening, Books and TV subscriptions and electronics, and less on clothes, cosmetics, sport, accessories and furniture.

‘Some 30 per cent of us are looking to change our spending habits for good, says Adam Bullock, Topcashback’s UK director. ‘Now is a great time to be analysing your finances so that when normal returns — if ever that happens — you will hopefully be feeling some of the benefits of learned behaviours.’

Experts say there are several ways of changing the way you spend for the better. The first takes time but won’t affect your lifestyle, since it involves checking for subscriptions you don’t use and cancelling them, and switching your gas, electricity, mobile phone contract and other bills to the best possible deal.

Victoria Arrington, from switching site energyhelpline.com, says it’s particularly important to think about your household energy bills if you’re working from home, as they’re likely to be far higher than before, particularly as the weather gets colder. Many of us are likely to be in for a shock when our meters are read, she warns, as the direct debits that go out for our energy are likely to be underestimated to the tune of nearly £95 a month.

‘Competitive, fixed tariffs are particularly important given increased energy usage during the Covid-19 pandemic, which means consumers are spending more on energy this year,’ she says.

‘At a time when consumers would normally be increasing credit to balance out the cost of their winter bills, they may actually be quietly building up debt.’

As well as giving a meter reading to your supplier as soon as possible it makes sense to switch to a more competitive rate if you haven’t for a while. Use energy switching sites such as Comparethemarket or USwitch, or simply ring the provider you are with and ask if you are on the most competitive tariff and ask to switch if not.

Changing your mobile phone and broadband tariffs may also be worthwhile, especially if you are now using less data because you are at home more or need a faster broadband connection. An analysis of your phone bill should help you to see if you are using all the data you are paying for. Website billmonitor.com, developed by three Oxford mathematicians, is excellent at matching your energy bill with your usage.

Time for a spending reset

With many of us having dramatically changed the way we spend in recent months, now may be an ideal time to focus on discretionary spending.

‘Aside from the bills you pay each month, now is a good time to look at what you spend each month on “non-essentials”. Clearly, lockdown isn’t going to be indicative of your usual spending as we’re all going out less and online shopping more, but look back at your pre-lockdown bank statements and work out where you’re spending your money,’ says Laura Suter, personal finance analyst at investment platform AJ Bell. She adds that now is a good time to look at ‘lifestyle creep’, which may be sucking away at your bank balance without you even realising.

‘As people gradually earn more money they gradually start to spend more on their everyday lives, whether that is through buying slightly nicer clothes, going on more expensive holidays or eating out at fancier restaurants.

‘It is so small that we often simply don’t notice it — hence the term “lifestyle creep”.

‘There’s nothing wrong with this as long as you’re living within your means, but it’s a good idea to pinpoint areas where you can easily cut back and save money, should you need to.’

With Britain now deep in recession, the ‘new normal’ for spending may look as different to pre-Covid days as the modern office does now it is decked with Perspex screens and hand sanitiser dispensers.

Keeping a lid on spending in the current months seems like a prudent decision. By the time the ONS publishes figures for its next Family Spending In The UK report, our habits may look very different indeed.

Where Britain spends its money 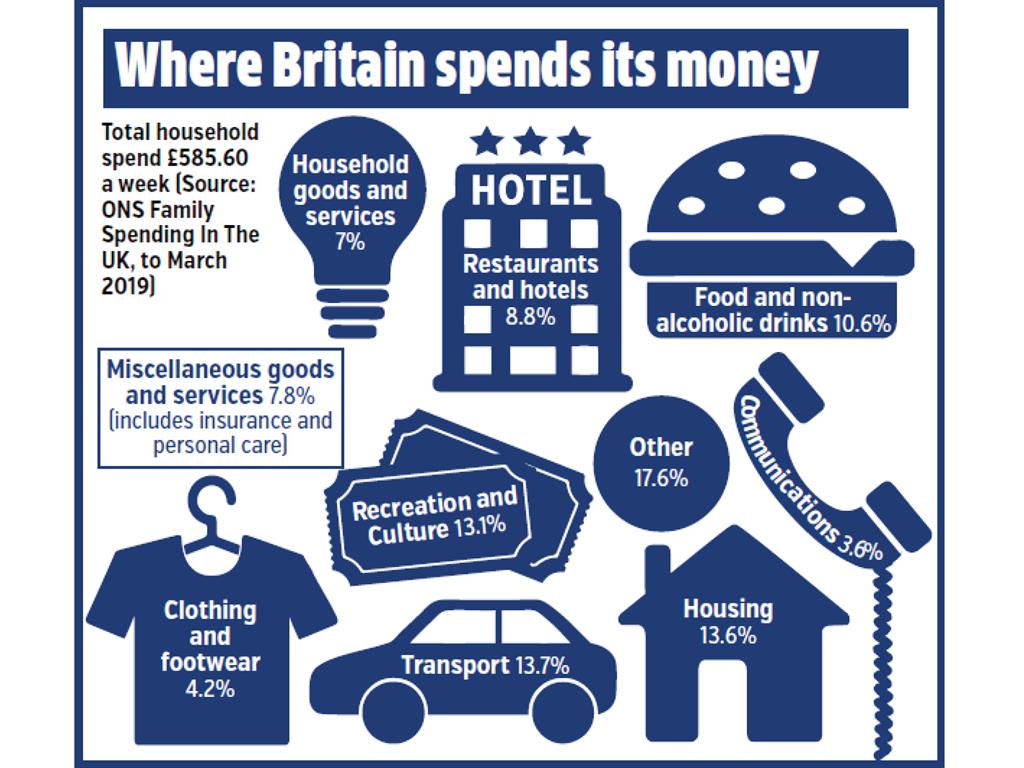