Boris Johnson faced demands to ‘accept responsibility’ for his Brexit deal ‘mess’ as he tried to defend his controversial plan to MPs last night.

In a fiery Commons exchange, shadow business secretary Ed Miliband — standing in for Labour leader Sir Keir Starmer — said it was time for the prime minister to ‘fess up’ and admit ‘either he wasn’t straight with the country about the deal in the first place or he didn’t understand it’.

He added: ‘A competent government would never have entered into a binding agreement with provisions it could not live with.’

And he warned MPs that passing the Internal Market Bill would ‘equip the government with the power to break the law’, adding No.10 wanted to create the ‘Johnson defence — one rule for the British public and another for this government’.

But the PM insisted the legislation, which would put the UK in breach of international law by breaking the terms of the treaty signed with Brussels, was a necessary ‘legal safety net’ to protect the relationship between Britain and Northern Ireland.

He sought to quell a growing Tory revolt over the measures by claiming that passing the bill would strengthen the hand of negotiators trying to strike a trade deal with the EU.

The changes mooted are an ‘insurance policy’ he hoped would ‘never be invoked’ if an agreement was reached with the EU, he added.

‘In recent months, the EU has suggested it is willing to go to extreme and unreasonable lengths using the Northern Ireland Protocol to exert leverage against the UK in our negotiations for a free trade agreement,’ Mr Johnson said.

His plea to MPs came hours after ex-premier David Cameron said he had ‘misgivings’ about the bill as ‘passing an act of parliament and then going on to break an international treaty obligation is the very, very last thing you should contemplate’.

Former chancellor Sajid Javid said he could not tow the party line as ‘breaking international law is a step that should never be taken lightly’.

Geoffrey Cox — attorney general when the withdrawal agreement was signed last year — said passing the bill would damage the UK’s standing in the world.

The bill passed its second stage last night by 340 votes to 263 but could be amended to quell a larger rebellion in the House of Lords next week.

Meanwhile, Tory MP Rehman Chishti yesterday quit as the PM’s special envoy on Freedom of Religion or Belief in protest to clauses in the bill. 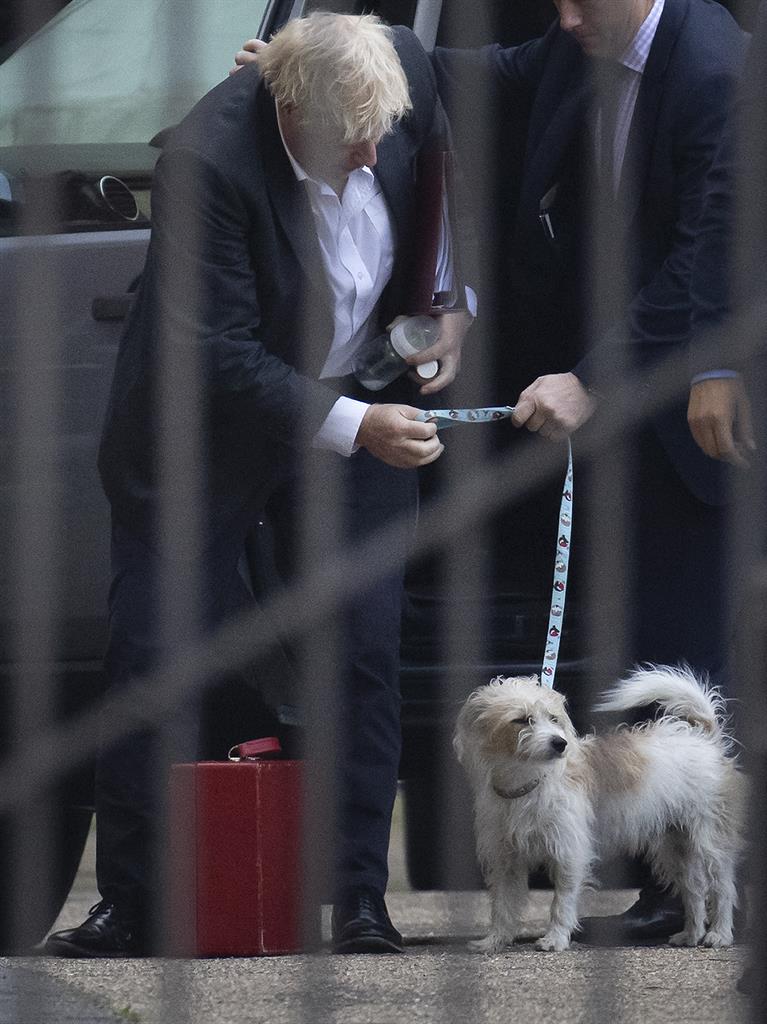 BORIS JOHNSON knew his priorities when he was dropped off at Downing Street yesterday following baby son Wilfred’s christening. In one hand, he clutched an empty feeding bottle, while in the other he held dog Dilyn’s lead. His red box full of official documents was on the ground. PICTURE: LNP