MICHAEL GOVE has been accused of ‘sanctioning stereotypes’ and ‘verbal blackfacing’ after a tweet quoting the rapper Stormzy.

The cabinet minister had responded to the grime artist’s support for Labour leader Jeremy Corbyn by claiming the singer is ‘a far, far better rapper than he is a political analyst’. 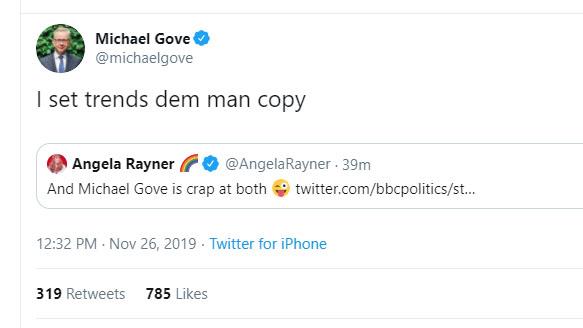 His tweet was a direct quote from Stormzy’s 2015 hit Shut Up and received thousands of comments, many of them negative.

Author Chris Brookmyre accused Mr Gove of ‘indulging in the verbal equivalent of blackface’. Fellow writer Malorie Blackman tweeted: ‘Seriously? If this isn’t a spoof account, is this supposed to swing more of the “yoof” vote in a Tory direction?’

Ms Rayner responded: ‘Played ya self.’

Stormzy is one of a number of rap artists backing Mr Corbyn. In an Instagram post, last year’s Glastonbury headliner said: ‘There are several reasons as to why I’m voting for him — I would be here all day if I began to list them.’

■ AN HOUR-LONG dance music track featuring extracts from Boris Johnson’s speeches has been uploaded to the Tory Party’s YouTube channel. The apparent effort to attract younger voters is captioned ‘lo fi boriswave beats to relax/get brexit done to’. Under the video, the party encourages viewers to ‘check out our Soundcloud’ with a link that actually leads to the Conservative website.