KELVIN FLETCHER still can’t believe it. ‘The last time I was in an arena was watching Disney On Ice,’ laughs the Strictly champion, 35, of his current jaunt around the nation’s biggest entertainment venues as part of the dancing show’s current UK tour.

‘It’s all very exciting but I’m sure I’ll get nervous as I’m about to go on.’

Fortunately he has partner Janette Manrara dancing with him as original partner Oti Mabuse — who masterminded his victory — is busy with other TV commitments. Janette has been part of the last four Strictly tours and is excited to be doing it again.

‘You can’t explain that feeling you get from the crowd — you feel like a dance rock star,’ she laughs. ‘The audience is so energetic — it’s the perfect end to Strictly.’ 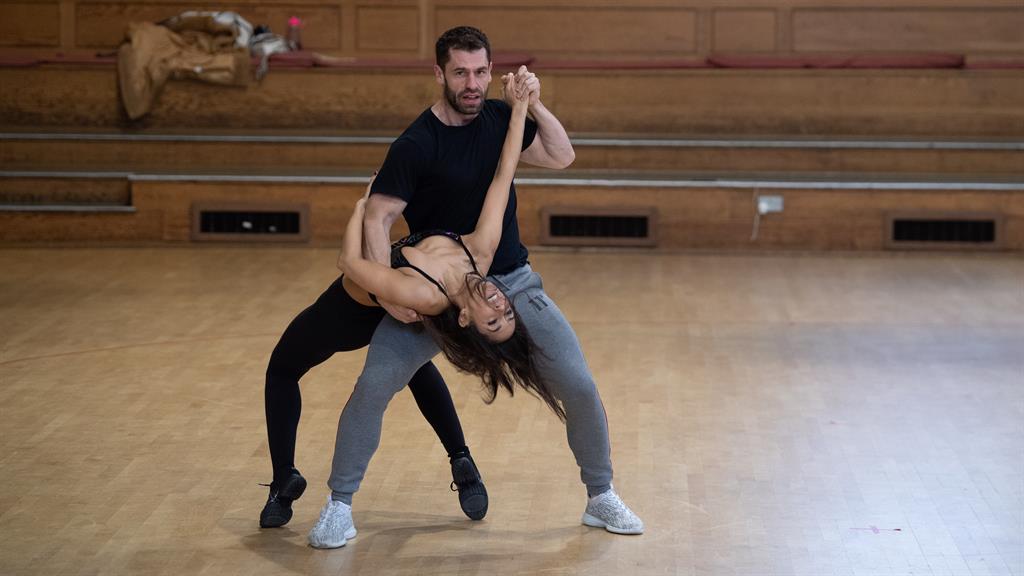 They’re chatting while the cast — including soap stars Emma Barton and Catherine Tyldesley and sport presenter Mike Bushell — rehearse a big group number in a nearby studio.

‘You’ll be fine,’ Janette reassures him. ‘They’re a minute-and-a-half, max. You have muscle memory.’

The show dance, a mash-up of multiple dance disciplines topped off with a dazzling display of gravity-defying press-ups from the gym devotee, brought the house down and the judges to their feet. Janette won’t tinker with that Glitterball-winning choreography. ‘I admire everything Oti’s done on Strictly,’ says Janette. ‘She’s great at what she does.’

And the couple have kept Oti involved — they sent her videos of their first day of rehearsals, which received her seal of approval.

Janette spotted Kelvin’s potential straight away, after he replaced the injured Jamie Laing on the show. ‘Because he joined late, none of us had seen him dance before,’ she says. ‘So, when he did the samba he blew all the professionals away. We knew he was one to watch.’

Janette had an eventful series herself. She was paired up with Paralympic table-tennis champion Will Bayley, but a dance injury saw him leaving the series early.

The pair pulled at the nation’s heartstrings with a special interpretive dance inspired by Will’s condition, arthrogryposis, for which he had reconstructive surgery on his limbs as a small child.

‘I’ve never cried in seven years on Strictly,’ says Janette, ‘but when we finished that contemporary number we were on the floor crying and hugging each other because I know how much it meant to him to say what he wanted to say. To do it though something which means so much to me, through the art of dance, was really special,’ she says.

Will plans to see his pals on tour and Kelvin’s family will also be there. His dad became a fixture on the show thanks to his emotional reactions to Kelvin’s dances.

‘He’s not showbiz at all,’ laughs Kelvin, who spent 20 years in soap opera Emmerdale. ‘I’ve been in TV since I was a boy but he’s so quiet and unassuming. He only comes out of his shell at parties when he’s had a few beers and if they play Northern soul.

‘He’s still delighted I won. All you ever want is to make your parents proud, so that night means a lot.’

But Kelvin’s not sure everyone in the family will be so supportive.

‘A friend came round last week and called me the Strictly champion. My daughter, who is three, said, “No, it’s Anton.” I had to tell her daddy won it — her favourites are still Anton and Emma. I just hope she votes for me.’

■ Strictly Come Dancing Live is at Arena, Birmingham until Sunday, and tours until February 9, strictlycomedancinglive.com