SO, what does a man who regularly has four million volts run through him look like up close? Well, sitting across a table from The Lords Of Lightning at a pub in east London, just yards from where they will be performing at Arcadia this weekend, I have to report the look is remarkably unfried. In fact, Kino McDonald and Joshua Leighton-Trew, two acrobats who perform wearing 15kg chain-mail anti-shark suits — allowing four million volts to light them up, frazzle all over them and then come out of their fingertips as they toss lightning bolts to each other — look pretty good.

And there’s not even a whiff of burnt toast.

The Lords Of Lightning are an integral part of the team that makes up Arcadia which, as anyone who has been to Glastonbury over the last ten years will know, are the troupe that use repurposed military hardware to create huge fire-breathing bugs on top of which DJs perform.

And now that Glastonbury is taking a year off, the Arcadia crew are rolling into London for their own festival, bringing the best of what they’ve done at other shows together with some spectacular new bits to celebrate their tenth anniversary.

Arcadia is the brainchild of engineer Bertie Cole and Pip Rush Jansen, a scrap-metal sculptor. They knew each other at school and, when they ran into each other at a gig in Spain, bemoaned the fact that there ‘wasn’t much love going into the visual side’ of music festivals.

‘We were just mates who wanted to have fun, who liked designing and making stuff,’ says Pip. ‘We couldn’t really find a career that would facilitate that but Mike Eavis, the man behind Glastonbury, gave us a bit of space and a bit of money to buy some scrap and we took it from there.’ 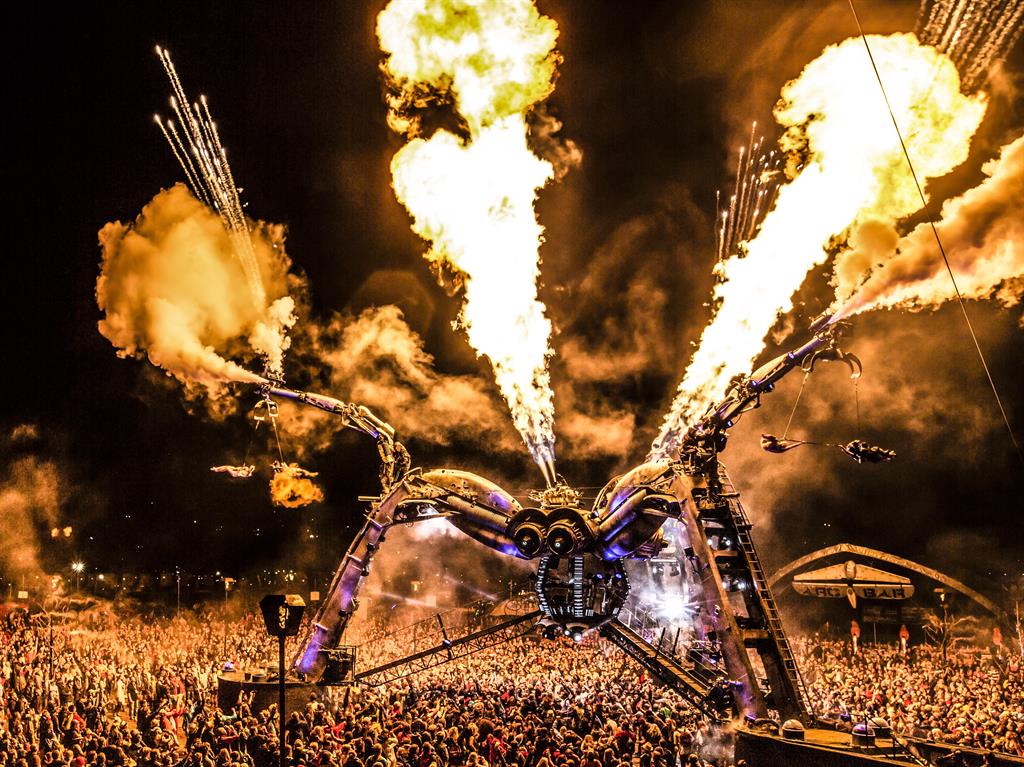 Ten years on, Arcadia is a roving phenomenon that gets invited all over the world. But this first outing in London — featuring the likes of Leftfield, Sven Vath, Groove Armada and Rudimental — is set to be pretty special even by their standards. For a start they are bringing over the Whadjuk Noongar aboriginal dancers, who they bonded with while performing in Perth.

Pip says: We remixed one of their sacred songs, which we later found out we weren’t supposed to do. But when they heard it, they loved it and decided to bring their dancing out from the underground and share it with the world again.’

So what can you expect from the set-up at Queen Elizabeth Park, the scene of the London Olympic Games? ‘Well, for a start it’s all in the round and you can sit out on the edges and watch the spectacle, or you can get right in there and dance at the heart of it all and actually feel the impact in your body,’ Bertie tells us.

We’re told those gargantuan metal creatures, such as the 50-ton spider (inset) at the heart of the show, are derived from helicopter blades, a jet engine and tank treads, among other things. Bertie says: ‘It’s us turning things that can be negative into something really positive that gets people together.’

Speaking of positive, we still can’t quite fathom how the Lords Of Lightning avoid injury, or worse. ‘It doesn’t burn,’ explains Joshua.‘But you can feel it in your body. You start sweating up there and the salt in your sweat is very conductive.’

So, how do you not get, well, fried? ‘High voltage, low amps,’ says Kino. ‘Ampage kills, voltage is more of a slow-sizzle barbecue. The danger is if you fall off the podium because it’s very slidey. And you do come off looking quite blackened.’

But the last word goes to Pip, who assures us that safety is a priority, adding: ‘It’s now very much a don’t try this at home thing — we’re actually working on the edge of what’s possible.’