LEWIS HAMILTON was beaten to top spot by Max Verstappen in opening practice for the British Grand Prix.

Championship leader Hamilton, bidding to win at Silverstone for a seventh time on Sunday, trailed Red Bull’s Verstappen (pictured above) by 0.474 seconds.

Hamilton’s Mercedes team have been the class of the field so far this term, winning all three opening rounds.

Hamilton, five points clear of team-mate Valtteri Bottas at the top of the standings, predicted that the all-black cars will be difficult to beat this weekend.

But Verstappen’s strong pace in the opening action at a sun-drenched, spectator-less Silverstone, suggested Hamilton and Mercedes will not have it all their own way.

Verstappen might have set his best lap on the speediest soft tyre compound — with Hamilton (below) electing to use the slower medium rubber — but Red Bull will nevertheless be encouraged by the Dutchman’s time. 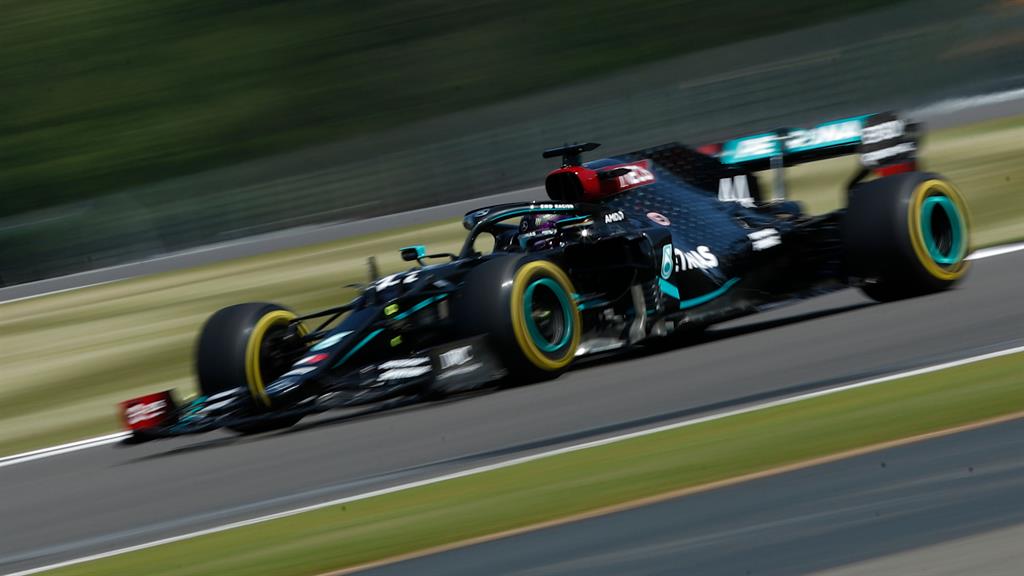 Lance Stroll finished third for Racing Point, with Alexander Albon fourth in the other Red Bull. Ferrari’s Charles Leclerc finished fifth with Bottas only sixth in the order, more than one second off Verstappen’s pace.

Hulkenberg, the German driver with 177 grand prix starts under his belt, was thrust back into the limelight here after Racing Point elected to use his services as a replacement for Perez.

Perez has been sidelined for this race, and probably the ensuing round at Silverstone next weekend, too, after contracting coronavirus.

The 30-year-old returned a positive result on Thursday evening after revealing he visited Mexico to see his sick mother following the Hungarian Grand Prix.

Hulkenberg, who was dropped by Renault at the end of last season, finished sixth-tenths behind team-mate Stroll.

Elsewhere, the session was temporarily red-flagged after Antonio Giovinazzi ran through the gravel at Becketts and shredded his rear tyre. The marshals were deployed to sweep up the debris allowing the session to get under way once again.

Ferrari’s Sebastian Vettel did not complete one lap after the four-time world champion was restricted to the garage with mechanical problems. It is expected he will be up and running again for the second session which takes place later this afternoon.