FRENCH President Emmanuel Macron has set a target of five years for the ruined Notre Dame Cathedral to be rebuilt.

Mr Macron (pictured) outlined his hopes for the restoration in an address to the nation last night, little more than 24 hours after the fire.

He said France ‘will rebuild Notre Dame Cathedral even more beautifully’ and pledged to ‘mobilise’ as he thanked emergency services and donors who pledged money for the work.

In a series of tweets after the address, Mr Macron said: ‘We will rebuild Notre Dame Cathedral, even more beautiful, and I hope that it will be completed within 5 years.’

‘In our history, we have built cities, harbours, churches. Many have burned or been destroyed, by wars, revolutions, men’s faults. Every time we rebuilt them,’ he added.

‘The fire of Notre Dame reminds us that our history never stops, never, and that we will always have trials to overcome.’

Nearly 400 firefighters battled through the night before the blaze was declared fully extinguished at about 10am local time (8am GMT).

Two police officers and one firefighter were injured, and at one point it was feared the 850-year-old Gothic masterpiece would be completely destroyed in the blaze, which lasted more than 12 hours.

The bells at Westminster Abbey tolled at 5.43pm yesterday afternoon — 24 hours after the fire started — and Prime Minister Theresa May announced bells at churches and cathedrals across England would ring in a further show of solidarity on Maundy Thursday. 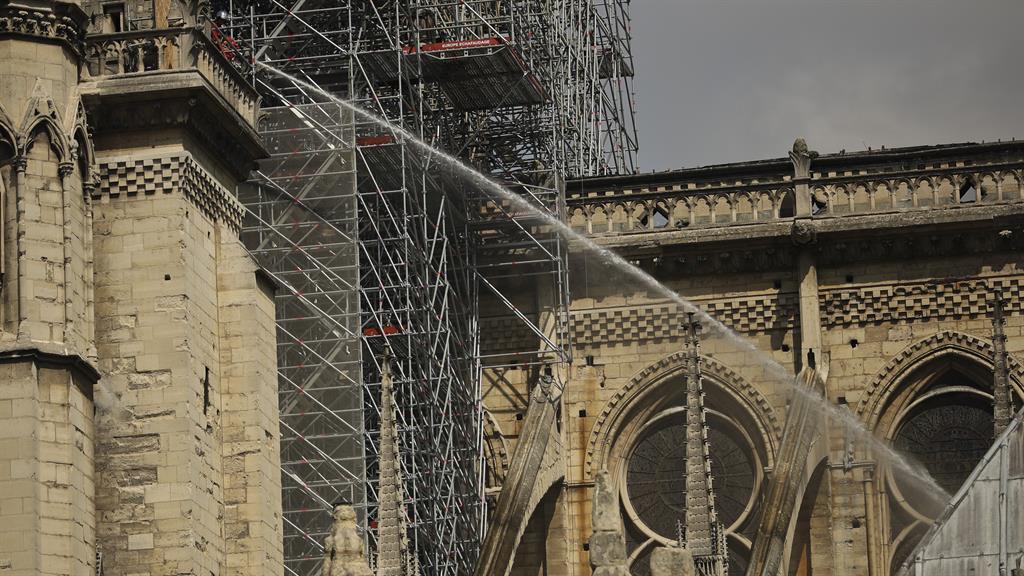 She described images of the destruction as ‘truly heart-rending’, adding: ‘President Macron has pledged to rebuild the cathedral and I have conveyed to him that the UK will support this endeavour however we can.’

Investigators believe the blaze was caused by accident, possibly as a result of restoration work taking place.

The tragedy prompted an outpouring of support internationally, with the Queen saying she was ‘deeply saddened’ and Pope Francis offering his prayers.

In a message to President Macron, the Queen said: ‘I extend my sincere admiration to the emergency services who have risked their lives to try to save this important national monument.’

By yesterday evening, more than 600million euros had been pledged from French families and companies including Total and L’Oreal Group.

The cathedral also housed a collection of valuable treasures and French culture minister Franck Riester said some which were salvaged were stored overnight in the Paris town hall to be moved to the Louvre museum ‘as soon as possible’.

He said major paintings are not likely to be removed until Friday morning.

‘They have not been damaged but there could be some damage from the smoke so we are going to take them safely and place them in the Louvre where they will be dehumidified and they will be protected, conserved and then restored,’ Mr Riester said.

Fifty investigators are now working on a ‘long’ and ‘complex’ probe into the cause, Paris prosecutor Remy Heitz told reporters.

They will interview workers from five companies hired to work on renovations to the cathedral roof.

Speaking in front of the cathedral, junior interior minister Laurent Nunez said: ‘The task is — now the risk of fire has been put aside — about the building, how the structure will resist.’

It was expected to take 48 hours after the fire was extinguished for the structure to be deemed safe enough to enter.

Many Parisians spent yesterday mourning viewing the destruction of one of the city’s most popular and admired landmarks.

European Council president Donald Tusk told representatives the blaze reminds Europeans of ‘how much we can lose’.