TEN years ago, if someone said I’d make another album I would have laughed,’ says Louise Redknapp, who is making an unexpected pop comeback with Heavy Love, her first new album for 20 years.

‘I wouldn’t have had the confidence to do it,’ she explains. ‘Once you’re out of the industry it’s tough to come back — and I didn’t want to be a nostalgia act, which is why the first single was Stretch. I went for the sexy video.

‘Going out prancing around in a leotard singing “I want to see you stretch” was always going to get a mixed reaction, but it was too late to play safe. I’d been through such a lot publicly.’

Louise found fame in 1993 as a member of Eternal, whose debut album, Always And Forever, was the first million-selling record by a girl group in the UK. And long-time fans will be excited to hear that she has invited her former Eternal bandmates to join her on tour.

‘If they want to be involved in any way, that would be amazing,’ she says.

Having left Eternal in 1995 to pursue a solo career, she married footballer Jamie Redknapp in 1998 before devoting most of her time to bringing up her two sons. 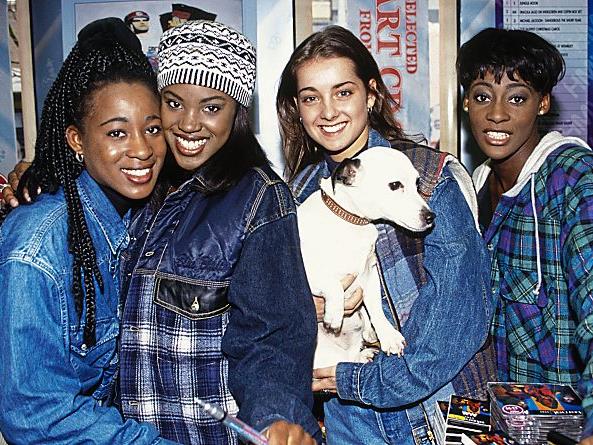 Louise’s life changed, though, when she joined the Strictly… line-up in 2016 and made it through to the final. She returned to showbiz but her personal life suffered, and her marriage ended in December 2017. It was during this tumultuous period that she penned Heavy Love.

After Strictly…, she had landed a publishing deal and planned to write songs for others. But her A&R person said the songs were so personal she should record them herself. ‘I thought that ship has sailed,’ Louise laughs. ‘But they said the songs would resonate with other people.

‘Writing the album was a way of putting my heart on the line without being misquoted. Not every song is about my personal life but a big chunk of it is.’

Working on the album was an important creative outlet at a time her personal life was going through such difficulty.

‘An important part of it was having somewhere to be every day. Anyone who’s gone through anything like I have will know that it’s important to have a purpose and feel like you’re doing something constructive. Especially working with such an amazing singer as Sinéad Harnett.

‘I had a moment where I could really let my heart out and sing with someone I felt I could be very open with.

‘I’ve poured more of myself into this album than I’ve given in 25 years worth of interviews,’ she adds. ‘I hope that it makes people realise we all go through the same stuff and there are songs that people can listen to and think, “Today is going to be OK.’’’ With the album complete, Louise is presumably looking forward to no longer talking about her divorce in interviews?

‘I would prefer not to talk about it. I would prefer my kids never had to read a comment about it,’ she reflects. ‘But I have also been in this industry long enough to know that’s never going to happen. I had a public marriage that broke up and I understand how it works. I just try to be as honest and respectful as I possibly can.

‘I’ve tried to respect Jamie and my kids but also respect that a journalist has a job to do — I just try to be as honest as I can be without causing uproar. As a mum, as a woman, as someone’s ex-wife, that’s the best I can give — just trying to maintain a level of dignity for all of us. And try to move on as gracefully as I can.’

And she’ll be moving on with the help of her loyal fanbase as her 11-date tour hits the road next month. ‘I hope that people will give the album a chance,’ she says. ‘It has been made with blood, sweat and tears. And I want the tour to be a wicked, fun night.

‘There’ll be a few special moments thrown in and maybe a bit of a trip down memory lane — but brought up to date.’