WINNING Britain’s Got Talent was life-changing for Lee Ridley but not in the way you’d expect. Yes, he’s famous enough to tour but now people are actually talking to him. ‘One of the best things is people are engaging with me a lot more than they would have,’ says the 38-year-old comedian, whose cerebral palsy has left him unable to speak. ‘For the first time they seem comfortable talking to a disabled person.’ And some of them are Royals…

You performed in front of Meghan and Harry at the Royal Variety Performance and then met them. Were you nervous?

My main worry was that I’d tap the wrong button and accidentally swear in front of Harry and Meghan. It was lovely meeting them afterwards. They told me how much they’d been looking forward to my act, which I found very surreal. Harry also asked me what Simon Cowell was really like, so I told him that Simon was a pussycat really.

At what age did you find your voice, ie, receive an electronic communication aid?

I was eight and I’m pretty sure that I was just amused that I could finally say things like ‘bum’, ‘boobs’ and ‘willy’ myself for the first time. Humour definitely helped me cope when I was growing up and it still does. If I didn’t laugh about my situation, then I’d most definitely cry. I also think that I used humour as a defence mechanism. As long as I was laughing at myself, it meant no one else could laugh at me first. 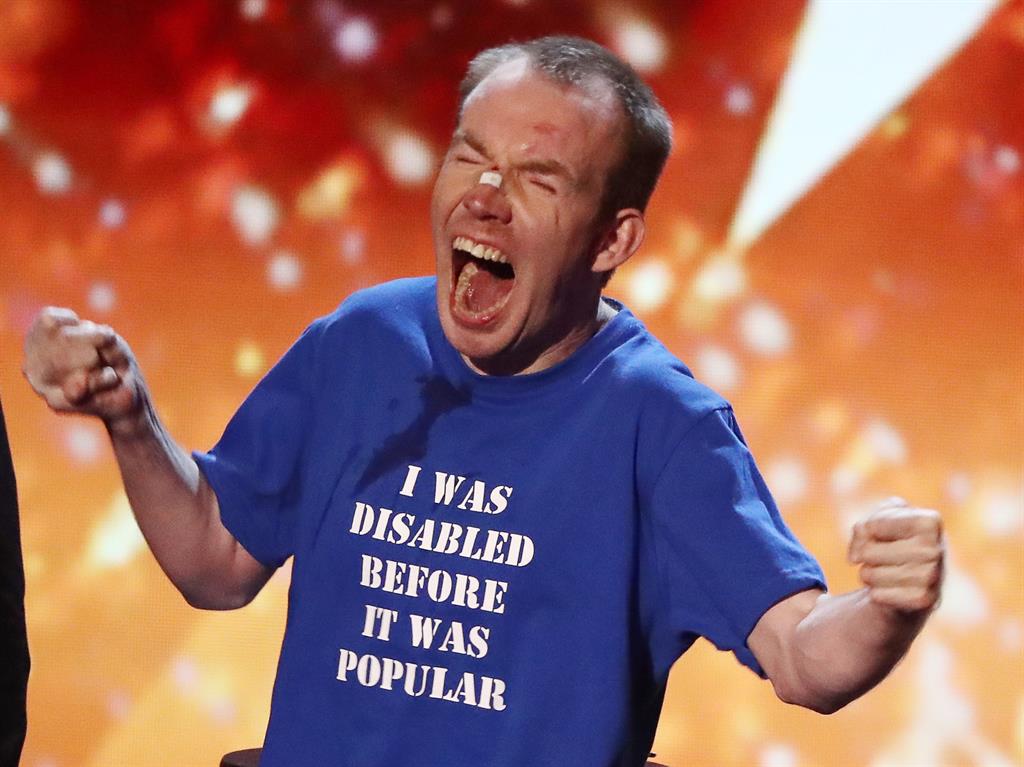 How do you deal with hecklers? Do you have a favourite put-down to use?

I have never been heckled. But I do have some comebacks stored just in case. I’m dying to use them. So maybe you could come and heckle me one day.

You’ve said you find it easier to be on stage rather than facing someone you don’t know for the first time. Is this true?

There’s a very different dynamic between standing on stage and talking to strangers and meeting a stranger face-to-face. When I’m on stage I feel I have more control of the situation. In real life, I’m very shy.

You actually auditioned for The X Factor. What happened?

I auditioned for a joke. Choosing which song to sing to the judges was hard. Shout by Lulu was an obvious candidate, as was Don’t Speak by No Doubt. I never even expected to reach the judges. The look on their faces as I began to sing was priceless. Especially as I started to sway along to the words. Unsurprisingly, they rejected me without even raising a smile. In fact, they still didn’t smile as I walked out and asked them if it was because my voice had sounded too flat.

You had a fall a few days before the BGT final. Did you think you’d have to pull out?

After my semi-final, I was going back to my hotel and I tripped and hit my head. For a brief moment, Lost Voice Guy became Lost Balance Guy. I didn’t go to hospital though — I’m a Geordie after all.

You say that comedy could change the world for disabled people. How?

I’ve always seen the funny side of my disability. It helped take some of the stigma away from being ‘different’ and to deal with the elephant in the room. I didn’t start stand-up to change attitudes. But I appreciate that when I’m on stage I am helping to do that, whether I like it or not. That’s how powerful comedy can be. I’ve had first-hand experience of an audience who weren’t sure about the disabled bloke on stage at the start of the night. But by the end, they were enjoying someone telling jokes for a living.

People criticise Twitter. But how has it helped you?

Twitter is a great way of testing out new jokes and material. It’s a fantastic way of keeping in touch with your fans. Social media has helped me a lot. Because I can’t talk, I tend not to phone my friends that often. So, I use social media to keep in touch with my mates.

Still hot under the tango collar from Strictly? Then get steamed up by the real thing as German Cornejo’s Tango Fire show brings the sultry Argentine dance form to the stage. Peacock Theatre London from tomorrow. peacocktheatre.com

Mark Morris Dance Group: Pepperland Take a classic LP and a renowned choreographer and what do you get? Pepperland, which finds Mark Morris working his magic on The Beatles’ Sgt Pepper. Tours from Mar 20. danceconsortium.com

Dance into the spring three productions to see