I’ve been doing cookery lessons on my YouTube channel, teaching people the basics, but I cook a lot anyway. I’ve written five cookery books. We eat out a lot as a family and we can’t do that now so I’ve been cooking even more. I cook three meals a day and lovely breakfasts to try to cheer the kids up — pancakes, waffles, blueberry muffins, bacon and scrambled egg sandwiches. 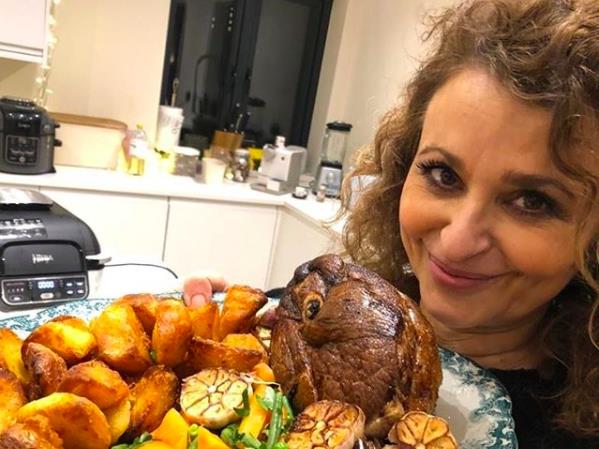 For lunch it’ll be homemade pizza or mini kebabs and then a full dinner with pudding in the evening. If you eat three nice meals a day you don’t eat in between. I love cooking — it’s a bit like meditation for me. With shortages you can substitute ground almonds for flour in cakes. For eggs you can take one tablespoon of flax seed and add three tablespoons of warm water and leave it for 15 minutes. You can use that in place of one egg.

I was doing the Couch To 5K podcast. I’ve done the marathon twice but I got to the point where running for 60 seconds left me out of breath. I was running in the park until two weeks ago. I didn’t like the idea of people running past and puffing on me. I’m hoping to get back to running but we’ll see. I’ve also been doing rebounding on a small trampoline. I have it out in the kitchen all the time so I can jump on it whenever I want.

I get on really well with my teenagers because I validate their feelings. I don’t say, ‘Oh well, count yourself lucky.’ If you do that it’ll kill your relationship with your kids. You need to acknowledge that it’s tough on them and they can’t see their friends. I say, ‘People love to call your generation the snowflake generation — you show them what you’re made of. Find a way to survive this but it’s OK to be sad at times.’ I don’t police their phone use but I make sure there are fun things for them to do, which takes them away from their phones — such as having a picnic in the garden or watching a film with them.

When family gets irritating!

I pretend I have to go and do something very important such as sort out my cupboards. I go and watch reality shows like Keeping Up With The Kardashians or Real Housewives. I get a break from them and they get a break from me.

I’ve been home-schooling for five years. We do child-led learning and we don’t follow the curriculum. One of the biggest mistakes parents make is suddenly thinking they have to pretend to be a teacher — that’s enormously stressful. They’re not teachers and no one on this planet knows everything. I say, ‘I don’t know the answer to that, let’s look it up’ — it teaches kids to be self-starters and investigate stuff for themselves. Tip two — don’t think you have to teach within school hours, education happens seven days a week, 24 hours a day. You can discuss a topic with children over dinner. Use whatever time works best for you — don’t think, ‘They have to be sitting at their desk at 8.30am.’ We work in the morning so we let our teenagers sleep until 11.30am and then we start at midday. If it works better for you to do it at 8pm, do it then.

I don’t think children are going to get so far behind it can’t be remedied and I don’t think parents should have to teach something that’s way beyond them. They’re not going to get so far behind they’ll never be fully educated. I couldn’t teach complex maths so I’d defer to someone else. If you can’t do it, you have to say to the school, ‘I can’t teach my child this, it’ll have to happen when they come back in September or give me a one-to-one.’ People are struggling mentally, emotionally, financially and then they’re told they have to be a full-time teacher as well?

I haven’t bought anything new for my YouTube videos. I just wear something that isn’t too wrinkled. I hope this [pandemic] will make us less consumerist. We want to fly wherever we want but we have a crisis with the planet and have to rethink how we live our lives. The fact communities are looking after each other and people are consuming less — it’s what we needed. We’ve learned what we don’t need.

Exercise is good for well-being. Even if you don’t have a garden, open a window or go outside to get some air. If you’ve been sitting in one place for a while, get up and move around, do ten star jumps, do something to break your pattern of thinking. Make a plan for the day and include a treat for yourself — whether that’s a nice bubble bath or watching a film you’ve wanted to watch.