A TEENAGE boy annoyed by road signs left dirty and hedges overgrown during lockdown has become a local hero after his mission to clean them up.

Joseph Beer, 15, noticed dozens of neglected street signs and hedgerows while on daily walks with his mum Lisa, 52.

With the help of dad Mark, 56, he rigged up a trailer for his bike and started pedalling around the streets near his home.

Almost every day, Joseph, from Chatteris, Cambridgeshire, has headed off on his bike, towing a bucket of soapy water, sponges and garden tools, including hedgecutters and a rake.

He has scrubbed street name signs covered in moss, including Wilburton Road in nearby Ely, and tackled hedges overgrown or obscuring road signs.

Joseph’s efforts have not gone unnoticed by the people of Chatteris and surrounding towns — with a driving instructor getting in touch to thank him for uncovering hidden road signs.

And one kindly neighbour, who Joseph’s family did not even know, was so impressed by his clean-up that she set up a GoFundMe page to reward him.

Lisa says her son, who has autism and ADHD, has been working ‘really hard’ almost every day of lockdown.

She said: ‘We are absolutely blown away with everything he’s done. His dad and I are so proud.

‘Every day he goes off on his bike with the trailer attached to the back.

‘He comes back absolutely filthy.

‘Then he’ll hop in the shower and get ready to do it all again the next day.

‘He started sharing photos on Facebook of what the signs and the pathways looked like before and after, and he has taken great pleasure in seeing the improvements he’s made.’

Joseph added: ‘I’ve found it really satisfying to look at the “before” and “after” pictures, and see the obvious improvements I’ve made to my home town.

‘Reading the positive comments from local people has been really encouraging, and has motivated me to keep going.

‘The fundraising page was totally unexpected and was a huge surprise.

‘I want to donate part of the money to our local food bank, for families who are struggling to feed themselves at the moment.’

Lisa said that his cleaning project has given Joseph — who usually boards at a residential, therapeutic school during the week — a sense of routine during lockdown.

She explained: ‘When he finished school in March, he was really struggling with the lack of routine.

‘Every day he wanted to find something new and challenging to take on. He had lots and lots of energy, and he wanted to put it to practical use.

‘When we were allowed to start going out on our daily walks, Joseph started noticing all these road signs that were really dirty, or were hidden by hedges so drivers couldn’t see them.

‘Sometimes we would walk along pavements where the hedges had overgrown and obstructed the pavement.

‘So much of the town has been neglected, because of people not working during the pandemic, but nature has carried on growing.

‘It started really niggling at Joseph, and he would point out all the things that needed cleaning or improving.

‘This has given him a sense of focus during lockdown.’ 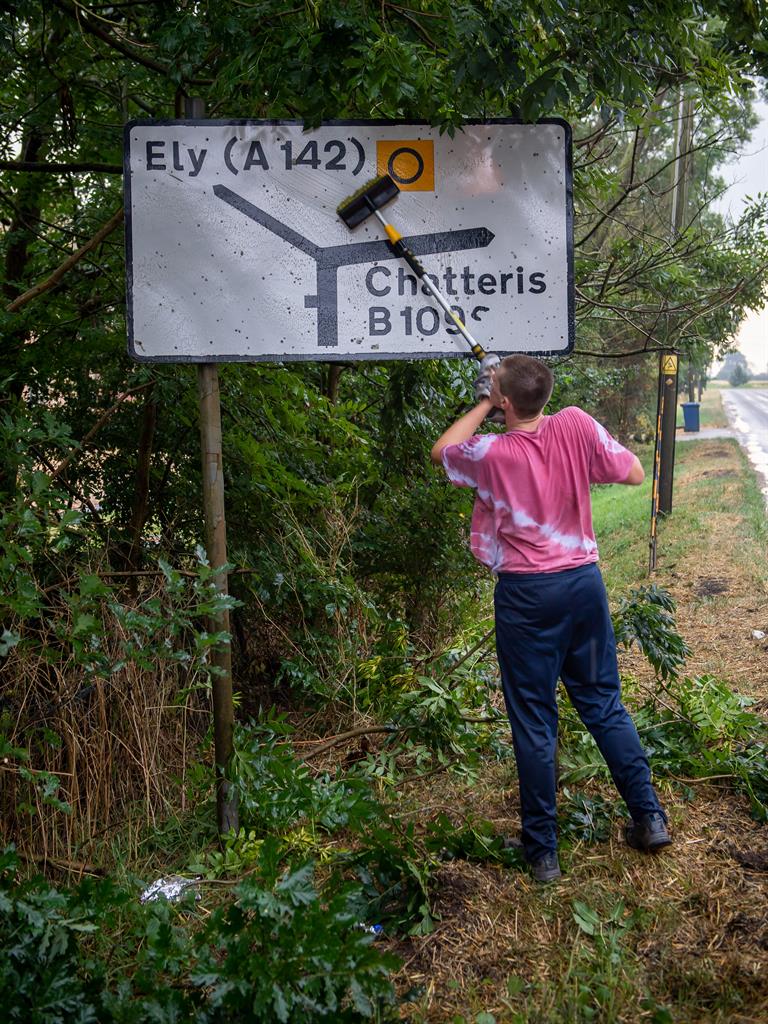 The teenager’s neighbours often stop to congratulate him or give him the thumbs-up when they drive past him on his bike.

Lisa added: ‘It’s just gone crazy. He is making a difference in the town, and it is clearly making local people really happy.

‘We even had a driving instructor get in touch with us to thank Joseph for cutting back some hedges that had grown over road signs, so his students could now see the signs.’

And Joseph has been praised by Councillor Ian Brady, who represents the Chatteris ward on Fenland District Council, who said Joseph’s initiative was ‘fantastic’.

Cllr Brady said: ‘I think he is doing an excellent job — you can really see the effort he has put in around Chatteris.

‘I don’t know him personally, but I have seen him a few times cycling around, and just the other day I drove past him as he was trimming some hedges back to expose a sign.

‘I think it’s a fantastic thing for a young man to be doing. He is a credit to his parents and to society.

‘I hope his efforts are an aspiration to other young people in the area.’

And Lisa said Joseph was not finished yet, and would spend some of the donations on new tools. ‘Hopefully he is going to carry on — at least until he goes back to school in September.

‘He is noticing new things every day.’

To donate to Joseph, visit gofundme.com.